Well the great weather continues, great for hot weather plants, that is.  For people the afternoons can be a little stifling.  A week ago the area got a good soaking, then yesterday another day long rain.  Last weekend I set up the pump and watered the garden and flower beds from the pond, which takes about an hour.   The rain yesterday saved me the trouble.  The days between the rains have been nearly cloudless and hot, that's why I needed to water three days after a rain.

The rabbit brood of eight bunnies is about nine weeks old.  The doe was bred on March 17, she kindled on April 17.  I removed the doe from the grow-out pen last week when the bunnies were about eight weeks old and put her back into her hutch.  Now the little ones have it all to themselves. I'll process them mid-July at about twelve weeks. 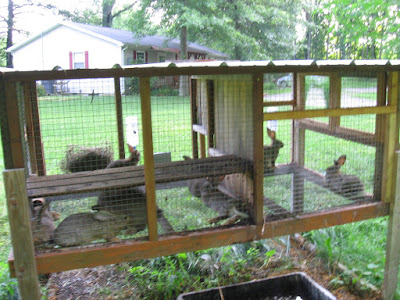 The doe probably stopped nursing the bunnies several weeks ago.  At 8 weeks she seemed to be getting somewhat irritated by their commotion.  Wild rabbits would probably be on their own at this point.  Another reason to get the mother out of the grow-out pen is the feed issue.  The little ones are given all the food they can eat, which is a lot as they are growing fast.  Once the mother stops nursing, her feed should be rationed or she will get overweight, which can lead to problems with her pregnancy.   With the little ones getting fed free choice she will eat all she can when she is in their pen, so out she came.  She's a big girl, probably at least twelve pounds. 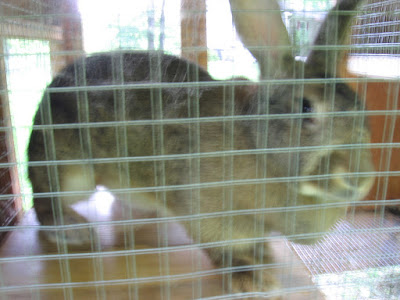 I was doing some 'back of the envelope' estimates of how much food the bunnies provide.  She will be bred again after this litter is processed, and if she has another eight kits that is sixteen this year.  Her only litter last year was ten kits, so it could likely be more.  That's sixteen kits that will clean out to a bit less than four pounds apiece, let's say about sixty pounds total.  Not bad for a high quality meat, 23% protein and low in fat.

From each rabbit there are about four generous servings of 'prime cuts' - the legs and back tenderloins.  The back with ribs and the belly meat can be boiled for stock.  Rabbit stock is excellent.  The meat removed after making stock makes another generous serving of pulled meat.  It makes a delicious barbecue.  That works out to five meat servings per rabbit, plus some stock for other things, probably about a pint per rabbit.  Then there's the liver, which I like.  For their size the liver of a rabbit is large, and two livers make a generous serving.  That works out to eighty meat servings and eight servings of liver for the year.  Not bad.  I'm estimating that the total price of feed is about $150.  I could save a little money by getting another doe, that way the buck would be doing double duty, but unless I can find some people to sell to that is a lot of rabbit meat.  Mostly though it is nice to know that I have a supply of high quality meat that I raise myself.

In other garden doings - the first brassica bed was weeded then seeded with berseem clover and buckwheat as a cover crop.  I haven't had much success with berseem clover thus far.  Maybe mixing it with buckwheat will help it along.  I want the clover in the mix as it will fix nitrogen.  After seeding I spread a layer of compost over the seeds.  I expect the rest of the cole crops will be out in a few weeks, although I will leave the broccoli in to see if any more heads develop. 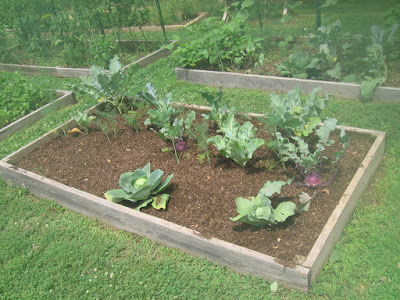 I took the string trimmer and laid waste to the oats in the squash bed.  Next year, no oats, just field peas.  The winter squash are starting to get somewhere, and the Fortex beans have made it to the top of the trellis, while the Kentucky Blue plants are working their way up the strings. 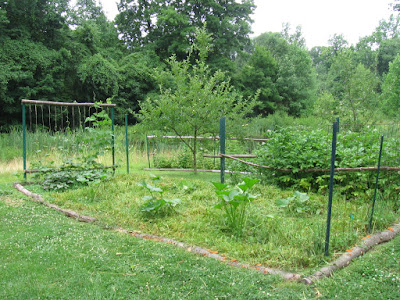 Lastly, I seeded another summer squash as a backup, in case the present squash gets the borer.  I figure there is about a one in two chance of borer destruction.  I only grow one summer squash at a time, that is more than enough squash, and frankly for a green vegetable I like beans and okra better, although they are all good mixed together.   Until next time. . .


Posted by gardenvariety-hoosier at 5:06 PM

The economics of the rabbit-breeding are interesting. I wouldn't be totally surprised if you decide to branch out into raising chickens...

You've had 2 soaking rains in the past couple of weeks? How lucky! We have been desert dry & similarly hot for over a month and no relief in sight. I'm trying sprinkling diatomaceous earth around the base of the squash in my efforts to thwart the vine borer this year - time will tell if it's successful.

I'm impressed with your rabbitry project and the hutch looks big and roomy for the bunnies. I have a friend who raises rabbits and shared some spicy rabbit stew, very yummy.

Your kohlrabi and brassicas look so amazing, mine have definitely been suffering in the heat.