Digging up the potatoes

Last year I did not grow potatoes.  The rodents had chewed up so many of them the year before that it seemed wise to take a break from growing them.  I grew sweet corn instead, which I'm not growing this year.  Sweet corn is a pain, and I can buy good sweet corn anywhere around here.

I planted the potatoes at one end of the squash bed.  Not much, just two rows of Red Pontiac and one row of Kennebec.   I probably could have left them grow another week, but the winter squash is demanding more space, and anyway I was worred that if the voles were active then they would do more damage than the potatoes would grow in that time. 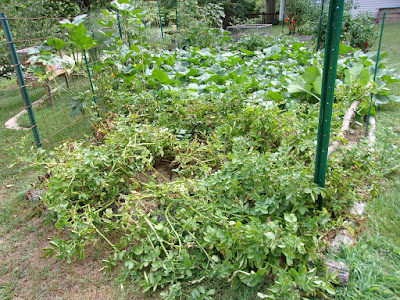 After they were dug up and put in buckets the ground was lightly hoed and raked.  I wasn't real fussy because the squash were going to be trained over this patch of ground.  It looks like the squash are chomping at the bit to expand territory.  In fact I had to pull vines off the potatoes before digging them up.  It's looking like it will be a fantastic year for winter squash. 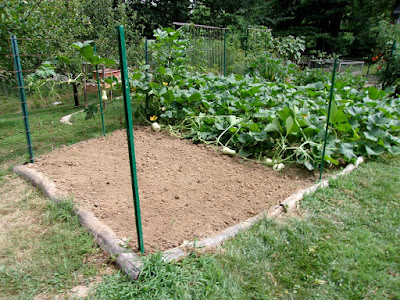 I attached a trellis to the two corner posts and carefully laid the squash vines over the ground.  They look a little ragged because their stems have been turned but in a week's time they should completely cover this area. 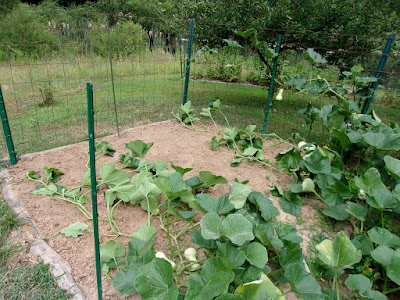 As for the potatoes - no rodent damage!  These are some of the nicest potatoes I've ever grown.  The Kennebecs weighed 13 pounds.  Assuming that the Red Pontiacs weighed at least twice that much, I call it a 40 pound potato harvest.  Can't wait to make a green bean and potato stew. 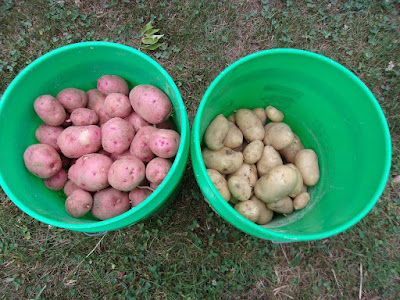 Posted by gardenvariety-hoosier at 11:14 AM

Awesome potato harvest! I'm going to be pulling my potatoes soon as well as at least half of the vines have died back. Judging by the growth of the leaves (or lack thereof), I'm not expecting a great harvest this year - not exactly sure why they didn't grow well, but best guess is the constant heat we've had was not to their liking.