I picked the first cucumber of the season this morning.  The spell of hot weather that began after Memorial Day really woke up the cucurbits and tomatoes.  The cuke was grown from 2009 seeds, a Burpee’s variety called Pepino.  After googling this I found that pepino is the Spanish term for cucumber, so I’ll have to look at that packet again.  It’s growing up the same trelllis with a Diva cucumber, a variety I’ve grown for several years and really like.   This cuke was OK, but not as good as the Diva, which has a fresher taste.  When I planted them I didn’t consider that the Diva produces only female flowers, and as long as there are no male cuke flowers around the seeds stay very small.  The Pepino has both male and female flowers so it will pollinate the Diva, which may change it’s flavor.  I’ll decide later whether or not to take one of them out.  They are sharing a 4’ wide by 8’ high trellis and one plant can easily cover the trellis. 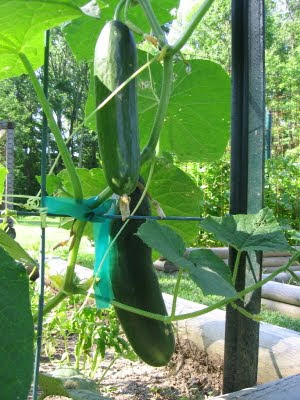 Harvest for the week:  Lettuce 11 oz; Sugar Snap peas 8 oz; Kohlrabi 1 lb 9 oz (2 bulbs); Cucumber 9 oz; Cabbage (1 head) 1 lb 13 oz.
I expected the week long heat wave to stop the peas in their tracks, but they made it through and now that it’s cooler they are producing again.  The lettuce surprised me too, only one plant bolted, a looseleaf variety.  There’s two romaine plants left in the bed which should continue growing now that temps are below normal– this morning it’s less than 70 outside.  After the lettuce is gone then chard will have to substitute as a leafy vegetable.  It looks like I'll get a Hungarian Wax pepper before long. 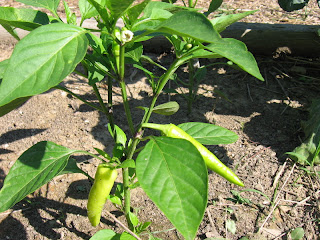 The squash and potatoes have been growing at amazing rates.  Maybe it’s the leaf compost I put into the beds this spring or maybe it’s because I cut down the nearby cherry tree and it’s roots are no longer pulling nutrients out of the nearby beds.  The Sunburst pattypan is now 4 feet across with leaves as big as dinnerplates.  Last week it produced the start of a squash but the plant sent no energy into it and it withered.  Typically squashes first produce male flowers, then female flowers a little later, so it was unusual for the first flower to be a female.  I’ve been spraying the stems near the base of the squash with Bt twice a week in the hope that it will stop the borer larva.  We’ll see.   (You can scroll down to last Monday's post to see how much this squash has grown in one week) 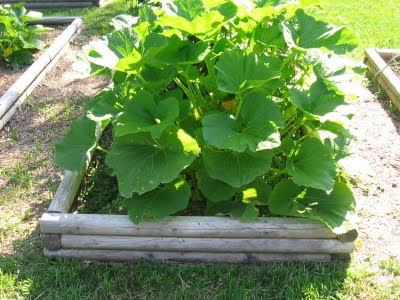 I haven’t tried the cabbage yet, just picked it after taking the picture.  It’s a Burpee’s variety called Earliana.  I hope it’s as good as Gonzales cabbage but probably not.  The brassica bed is opening up a lot.  After the broccoli in the back is picked I’ll seed in a patch of green beans in the open spot.  On the left is a single brussel’s sprout.  I’ve seen one cabbage butterfly and sprayed all the brassicas with Bt about a week ago.  So far no damage at all from cabbage worms.  Bt is the most effective control of the cabbage worm, and non-toxic.  But it does stink a little. 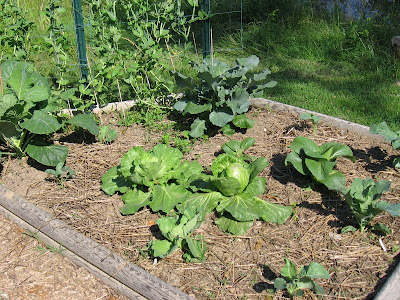 It’s time to wax philosophical, and the subject that gets waxed today is removing tomato suckers. Suckers are like a little tomato plant that grows in the node where a leaf connects to the stem. Everyone has their own method.  Some people do not sucker at all.  Others ruthlessly remove every last sucker.   Leaving all the suckers on usually results in a thick mass of green foliage and not many tomatoes, at least in my experience.  Removing all the suckers and leaving a single leader is fine – if your cages are about 15 feet tall.  There is a middle ground, a golden mean if you will, that has worked well for me when growing tomatoes in large cages.  I leave about 3-4 suckers on the plant starting near the base, making sure the suckers balance each other around the stem, and remove the rest.  That’s how I do it and it works for me.  Here’s the German Queen plant before and after: 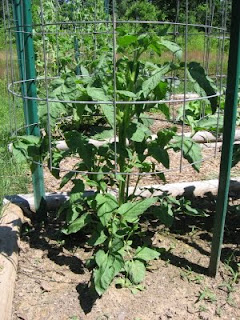 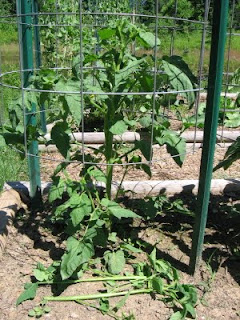 Finally the parsnips.  The plants will form a dense canopy soon that will shade out most of the weeds.  They require a lot of work early on – they’ve been through three thinnings and have been weeded twice.   But from here on out they take mostly care of themselves.  Last year an infestation of butterfly larva did some serious damage before it was caught, but can be controlled with Bt.  Which reminds me that the most important measure to prevent insect damage is regular inspection. 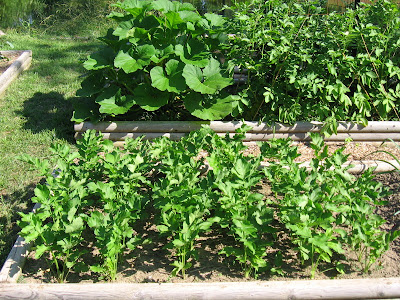 Posted by gardenvariety-hoosier at 6:48 PM

FYI, if your female cucumber flowers don't get pollinated, there won't be any cucumber fruits.

Nice progress in the garden, I agree with you on the suckering issue.The pics are wonderful!

Your garden is growing beautifully! And that squash plant looks like it's ready to spill out of the raised bed. I'm looking forward to seeing how they all produce for you this summer!

Anon - Not so for Diva. It is parthenocarpic, meaning the fruits will grow without pollination.

I'm awaiting my first cucumber. I hope it is soon, but I haven't seen the male fruit yet. Sigh. I love cucumbers so much.