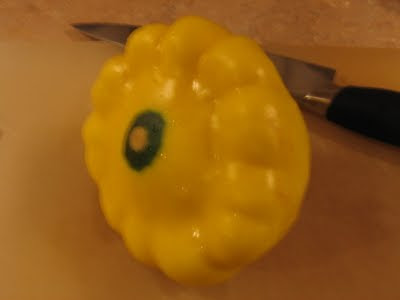 This week’s haul:  Sugar snap peas 11 oz; Summer squash 2 lbs, 14 oz (3 squash); Chard 2 oz; Cabbage 2 lbs (1 head); Catfish 15 oz
It looks like the sugar snap peas are done.  The vines aren’t showing any more flowers.  Just too much extreme weather, from very hot to cool.   I only got a few pounds, but any sugar snap peas are better than none at all.
The Sunburst pattypan squash are producing with a vengeance.  It’s a good thing they are bright yellow since the plant has so much foliage it’s really hard to find the squash.  I found one Sunday morning when I pushed apart the leaves that I missed the day before.  I charcoal grilled one of the squash with some of the chicken that I raised this spring.  The chicken legs and thighs were soaked in Stubb's marinade.  The squash was sliced into steaks and coated with olive oil, fresh parsley, salt and pepper.  I put the squash pieces around the chicken about five minutes after the chicken pieces were set on the grill and it's all ready at the same time. 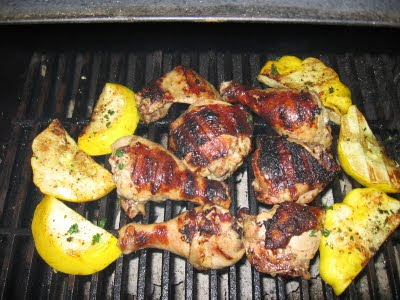 From now on I’m going to include any fish that I catch from the pond in the harvest tally.  The catfish are part of the nutrient cycle that goes through the vegetable beds.  Most of my property drains into the pond, as well as most of the adjacent lot.  I don’t fertilize the yard, but no doubt nitrogen and minerals from the watershed end up in the pond where it becomes food for fish.  I also feed the fish about two cups of catfish food daily, an external input.  When I catch and clean a catfish the head and entrails go into the compost pile, which really supercharges the pile, and the compost goes into the beds.  I’m a little concerned that the additional nutrient input from the fish food will result in an algae bloom from the increased fish population but that hasn't happened yet.  By harvesting the fish regularly and putting the entrails into the compost bin I hope that I’m removing enough nutrients from the pond to prevent that.
This fish, like the previous fish I’ve caught this year, is about two and one-half pounds (this is my best guess, I really need to get a fish scale).  I’ve gotten fast at catching and cleaning catfish after getting through the  learning curve.  Now it takes about fifteen minutes from the first cast to filets in the refrigerator.  They will strike the lure the instant it hits the water.  This fish provided two nice five oz filets and the backbone was also five oz.  I freeze the backbones, which have a lot of meat, and use them in  catfish chowder.  I’ll make chowder when fresh peppers, tomatoes, okra and sweet corn are available (not long now).
My recent experience with raising chickens has convinced me that catfish are the ideal protein source for a small homestead with a pond.  Not only is the feed conversion ratio very good, catfish require no special housing, protection from predators, medical treatment, or feeders.  In short virtually no maintenance whatsoever.  I feed them once a day but that is hardly work.  I’d rather clean ten catfish than butcher a single chicken.  I bread and pan fry them but I want to try some other preparations this summer.  I downloaded a recipe for catfish ceviche by, who else, Alton Brown, and plan to make it soon.  Next time I get a catfish I'll post a picture.
Posted by gardenvariety-hoosier at 2:48 PM

Very cool! I don't think I can say I have ever tried catfish!

Thank you so much for this post. We have a pond on our property...manmade for flood prevention. It's seasonal...but I have been talking more and more with my husband about doing the work to make it year-round. The grandkids and I catch crawfish and every once in a while we get a catfish. I have been looking into raising talapia via a self-contained system...aquaponics...but, I've been thinking lately it may be best to improve what I already have.

Allison - These are channel catfish. The meat is very good if the water is reasonably clean and they are fed some commercial feed.
Lynda - I haven't really tested the limits of what can be harvested from this pond (3/4 acre). I plan to catch one fish a week this summer and see how the population maintains. In the midwest the pond must be deep enough to get the fish through the winter. This pond covers a ravine so that's not a problem. You can probably consult a local extension agent for advice in your locality. Good luck and I'll post more on the fish.

I am really enjoying reading your blog! And I agree about including your fish totals in the harvest tally. You spend time, money, and effort raising them, so why not?

We have a small pond on the land we recently purchased and were planning on stocking it with fish. I had really only considered raising bluegill, but maybe catfish could be another option. I am not sure if our pond would be large enough though.

Now you are making want a pond on my property! That is indeed a very efficient protien production and a nice feedback loop into the garden production.

Those sunburst pattypan squash are sure pretty but a bit overwhelming in their productivity. I like your grilled squash method of using them.

It sounds like a nice arrangement you have. My husband really love catfish, especially blackened catfish.

Emily - grilled squash can't be beat.
Prairie Cat - There's a good population of bluegill in this pond. Bluegill and catfish occupy different niches and really don't compete, except large catfish will eat bluefill. I'd try both then at least one species should be successful.
Kitsap - These squash produce in spurts. Nothing right now, but in a few days. . .
Daphne - blackened catfish is a preparation I'm going to try

thanks for the enlightening information about fish! Although I have no experience with that, it's really fascinating to read and learn about it. The grilled squash looks delicious.