The vegetable plants are really hitting their stride, so it seems like a good time for an overview of where the garden is at.  What we think of as summer vegetables are in the batter’s box, excuse the baseball metaphor.  Summer squash will be ready in a few more days, and I expect beans, cucumbers and peppers in the next two weeks.  Tomatoes, eggplant and okra will take a little longer. 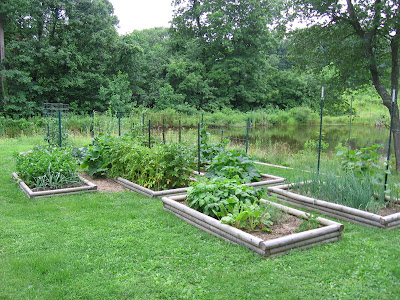 Winter squash are growing fast.  That’s a Metro Butternut in the back and a Tiptop Acorn in the forefront, both from Johnny’s.   I’ve been guiding the butternut vines to fill up empty spaces and then go up the trellis.  It tends to vine and will put out tendrils and climb with a little help and guidance.  The acorn is more bushlike with a single leader that I’ve been guiding in a semicircle.  There’s also half runner beans growing up the trellis which will have to battle it out with the butternut. 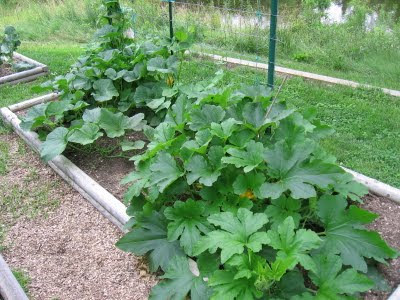 The big boy is the summer squash, Sunburst pattypan.  It’s never grown like this before.  It’s easily five feet across and four feet high.  I’ll get two squash in a few days and expect a deluge after that.  Good thing they are bright yellow as it will be real easy to lose squash in the vegetation.  I’ve been spraying the lower stems of all the squash plants with Bt twice a week, hoping that this will stop the vine borer. 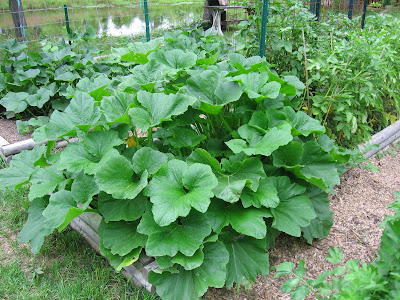 The potatoes grew quickly but are now showing some stress from disease.  The leafhoppers have been bad this season which usually spreads pathogens on the plants.  I’ve gotten after them with alternate sprayings of Neem oil and pyrethins, and also gave them a dose of fish emulsion this week since potatoes are heavy nitrogen feeders.  The caged potatoes are Red Pontiacs and Yukon Golds were planted in front (south) of the cages and held upright with bamboo stakes.  They’re a little too close for good air circulation and sunlight.  Next year I’ll plant a shorter plant in front and put all the potatoes in cages. 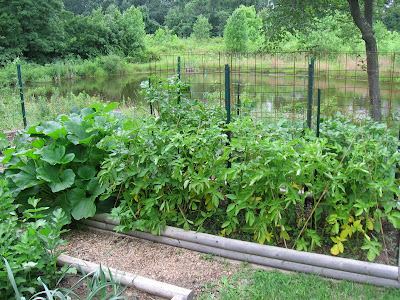 The tomatoes and peppers are doing well but have a way to go.  The eggplant was started a little too late and is behind.  This bed should fill out soon. 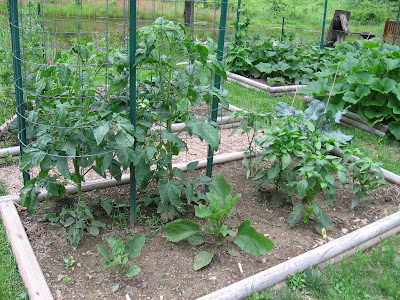 The parsnips have covered their bed with foliage.  I’ll have to check them now and again for insect larva but they require little maintenance at this point. 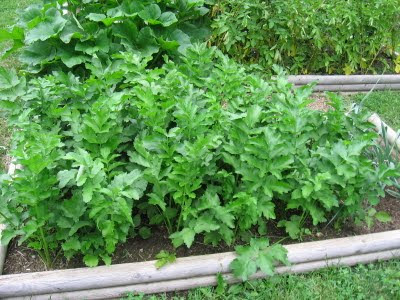 Posted by gardenvariety-hoosier at 5:28 PM

Things look great! I can hardly believe you are harvesting squash, when mine are just barely up. Ah well, they joys of Maine. When the patty pans get going, try picking them really small. Slice in half and saute briefly in butter. MMMMMM.