And the topic of this post is bugs, but not the wascally wabbit.  What we call bugs are for the most part insects, althought the tick is an arachnid.  My place has seen a lot of bug pressure this year.  Credit the generous spring rains, followed by an early June heat wave that ended a few days ago.  The tick populations seems to have subsided a little, meaning I’m not picking ticks off myself every few hours.  The deer flies are bad.  They will follow my car down the driveway.  Apparently the car is just another big animal to them.   They can stay with the car up to about 20 mph.
The nastiest insect by far is a very small one, like a very aggressive gnat.  They first became a nuisance last year. The first infestation appeared in mid May for about a week.  The second wave started last Saturday, when I was processing chickens (great timing), and is still underway.  The thing about these gnats is that they are relentless.  They fly into one’s ears and buzz around in the ear canal until you feel like insanity is imminent unless you get away from them.  When they are like this I can’t relax on the deck for more than a few minutes without being driven indoors.
This is my back deck overlooking the pond.  The shade bed was put in last year.  It was a nice place to relax until the gnats from hell took over.  I don’t mow around the deck, just cut down any saplings once a year and scythe large weeds.  The tall grass harbors predators as well as prey, and mosquitoes don’t usually venture onto the deck until after sunset. 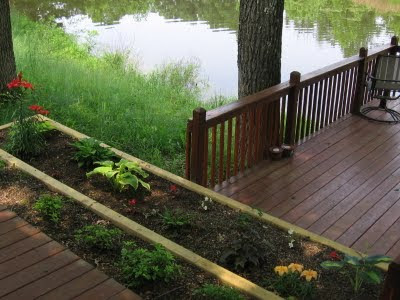 I’m convinced that the most important predator of flying insects around here is the dragonfly.  These insects are the most acrobatic flyers in the animal kingdom.  No bird or bat can stop, hover, and change direction like a dragonfly can, and they are very fast.  I like to sit on the back deck in the evening and watch them do their aerial manuevres over the pond, when the late day sun backlights them and their insect prey.   I think that the dragonfly is a major control of the mosquito population – the adults eat the adult mosquitos and the nymphs consume the larva.  Of course the frogs help out too.  At any rate, mosquitos have never been much of a problem here, until this year.
But this year there haven’t been many dragonflies.  Last fall we had a severe drought and the pond dropped nearly four feet in level.  A lot of the dragonfly larva must have been left high and dry.  By now I should be seeing many more of them around the pond and I’m only seeing a few.  I hope the population will recover soon and eat up more bugs.
The worst garden pest?  For me, the Japanese beetle.  Out here in the country they will arrive in swarms.  They especially like pole beans, the higher the better, which is why I plant bush beans now.  They also go for eggplant and okra.  I set out several beetle traps then drop the beetles into the water for the catfish – a little protein supplement.  With the exception of the vine borer, most other pests don’t do enough damage to ruin the crop.  I’m a little concerned with bean beetles.  Last year they infested beans for the first time and I had to rip out some beans to stop them.
Posted by gardenvariety-hoosier at 4:02 PM

I hope your dragonfly population stabilizes and returns to a more normal level. I am sure your current overpopulation of pest type bugs can be in large part attributed to their absence. Your deck looks like a great place to spend time (if the bugs would only let you!).