It’s been two weeks since I’ve posted, but the vegetable beds haven’t provided many reasons to post.  It’s the time of the year to remove spent plants and their supports (trellises, cages) from the beds.  The recent rains have made it easier, but not easy, to pull up the 6’ fence posts that supports the cages and trellises.   Only the trellis that supports a small planting of sugar snap peas remains.
Last week the total harvest was 4 oz of green beans.  I was hoping to get one more picking, but the sunny weather was cut short by several overcast days.  The beans have been in a race against the bean beetles, and as long as the sun was shining they were producing fast enough to stay ahead of the beetles.  Once the sun was blocked the beetles took the lead.  It was time to take out the beans.
I was hoping the beds would produce a pound per square foot this year – 250 pounds – but it doesn’t look like I’ll reach that number.  Still, there’s a 4x8 bed of leeks and parsnips that hasn’t been disturbed so I expect to add to the 205 pounds that I’ve picked to this point.   I’ll start pulling parsnips in a month or so.  Not making excuses, but the bacterial wilt killed the cucumbers and all the squash except the butternut this year, a major setback, but something always happens every year.   These are the parsnips, the foliage still green: 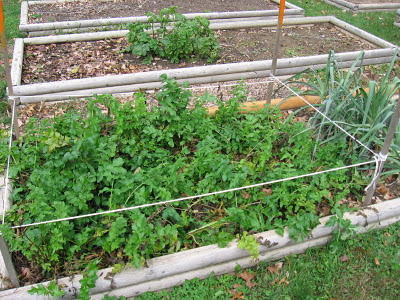 This week I picked a batch of peppers – Hungarian wax, red hot cherry, giant marconi and pimento – and made more salsa using the same routine that I posted earlier.  The marconi’s don’t peel as easily as the Cubanelles after roasting but the flavor is mighty fine.  For the salsa I added about 10 more cherry peppers that were in the refrigerator.  The heat level is about right. 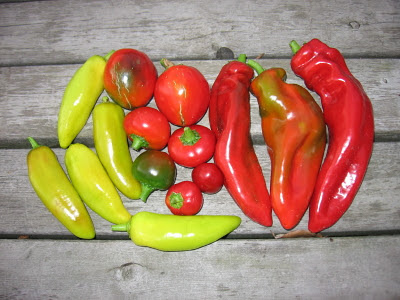 The potatoes were an experiment this year.  I planted Red Pontiac in three cages this year, and planted Yukon Gold in front of the cages on the south side of the bed.  Nearly all the potatoes were done by midsummer, succumbing to the fungi and pathogens that attack them.  One cage of potatoes showed a lot of new growth at the base of the stems, so I let the potatoes in that cage set out new foliage in the hopes that they would produce more spuds.
The first light frost on Sunday morning left the potato foliage looking worse for the wear.  I got the pitchfork and dug up spuds - a little over 7 pounds of potatoes.  The reddish potatoes are likely the newer ones that resulted from the second growth of foliage, while most of the potato harvest is the older potatoes.  The previous cages produced about 4 ½ pounds per cage, so this cage produced more taters.  The bigger potatoes showed some pest damage but it doesn’t look systemic.  The new small potatoes should make some nice redskins with butter and parsley. 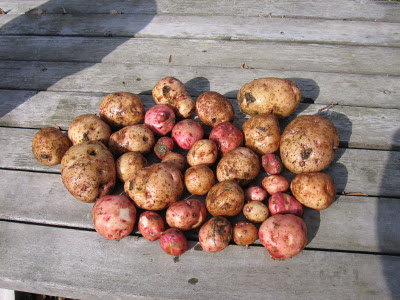 Next year I plan to space the cages to allow for better airflow, maybe plant onions between the cages.    They sure are good, much better than store bought.  I’d like to get 10 pounds per cage next year.
I got one last eggplant then pulled the plant.  This was a large plant, about 5’ tall, and it had an impressive root system, much deeper than a tomato plant, and not easy to pull up.   The peppers are hanging on but the frost withered the leaves somewhat.   Too bad, they have a lot of peppers that will never mature.  There’s still some Chinese cabbage, lettuce and spinach growing in the beds.  Not done yet.
Yields (two weeks):  Green beans 4 oz;  Eggplant 4 oz;  Sweet peppers 17 oz;  Hot peppers 11 oz;  Potatoes 7 lb 1 oz.  And a catfish, 9 oz of fillets.  Totals for the year are under the Results tab.
Posted by gardenvariety-hoosier at 9:16 AM

Your potatoes look great. And I'll be waiting to hear about the parsnips. ;-)

You have the makings of some good eating your two week harvest! I have about six pole beans left on the vine and really need to just declare them done and rip them out. I hate to see the fresh beans go though.

The potatoes look beautiful - nothing like fresh potatoes. Bet some crispy potatoes would go nicely with some catfish! :D

That is my goal every year too. I want to get a pound per square foot. In my last garden I didn't always make it since it was heavy clay soil. But here I'm closer to the mark.