Tuesday was time to mow the banks of the pond, which I do once, maybe twice, a year.  Most of the pond shore gets benign neglect and is a wildlife habitat. The shore area bordering the lawn is cut with the trail cutter.  Cutting favors the grasses and sets back the broadleaf weeds and trees.  I'll put the picnic table underneath the hop hornbeam tree on the right - a place to clean fish in the shade. 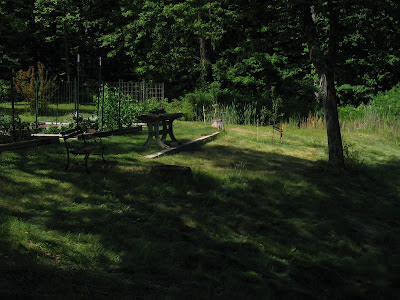 I put chains on the drive wheels of the garden tractor and removed the mower deck, then hooked up the brush cutter, essentially a big mower that’s towed.  The mower is backed down the bank as far as I feel comfortable, then pulled up to level ground.  I got most of it, but will have to finish some areas with a string trimmer.  The original owners hand mowed all the way around the pond.  Can’t imagine.

I’m not sure what to do with the squash.  There’s three squash in one bed – a Metro Butternut, a Honeybear Acorn, and a Cocozelle summer squash, which is supposed to be a more modest sized plant.  When I set out the seedlings on May 3 I planted two seeds near each seedling as a backup.  Then there were two cool nights with temps in the low 40’s.  The cool nights set back the butternut seedling while the others did OK.  So now the butternut is still small with a lot of small leaves, and the plant that came up from seed is almost as large.  I’ll probably remove the older butternut and leave the one that came up from seed.  I’ve found that plants that get off to a bad start and don’t look “right” early on often don’t do well later. 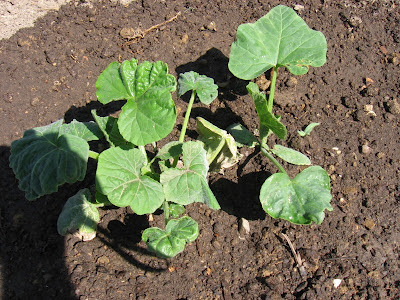 The other two squash plants each have a second smaller backup plant a few inches away.  I’m wondering if I should just leave both of them grow.  I don’t know if two closely grown squash will produce the same as a single squash.  Maybe each squash plant likes its space.

I’ve got one cucumber plant off to a decent start.  It’s a newer variety from Pinetree called Picolino. I also started some Diva’s indoors and out of three seeds none germinated.  Just my luck, I tested the seeds for viability last winter and both seeds tested came up (the seeds are three years old).  I planted four more seeds and one came up. That plant was just set out but there’s a lot of competing plants around it.


I’m hoping the Picolino cuke will get up onto the trellis before the Pakman broccoli gets any larger.   The broccoli may have to lose a leaf or two. 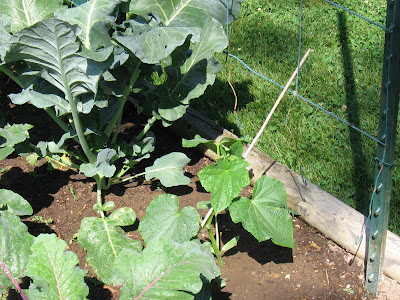 This asiatic lilly is really a beaut this year. 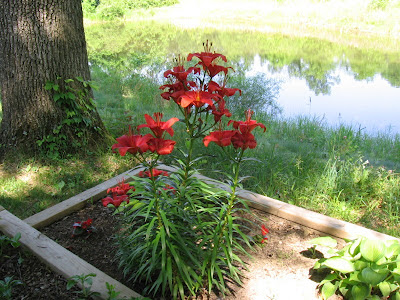 Posted by gardenvariety-hoosier at 5:10 PM

I always end up trimming a few leaves off of the broccoli as they encroach so badly on their neighbors.

My butternuts are kind of pouting right now too. They seem to be more sensitive than many of the other winter squash varieties I regularly grow.

Your field mowing looks great. It's amazing how much it transforms an area to do that and how inviting it makes the landscape - encouraging one to stay and rest a while and enjoy the surroundings.