Production is picking up and there’s some variety now.  I got kohlrabi 9 oz (1 bulb), pak choi 9 oz (1 head), lettuce 19 oz, radish 7 oz, spinach 3 oz.  The small head of spinach is the first of the spring planted spinach, a little small but I wanted a spinach omelette for breakfast.  For the year 18.9 pounds – 7.6 pounds of that is parsnip from last year.  I pulled the purple pak choi this morning since it’s growth appears to have stopped in the recent warm weather.  Compared to 2011 the beds have produced more lettuce and less spinach. 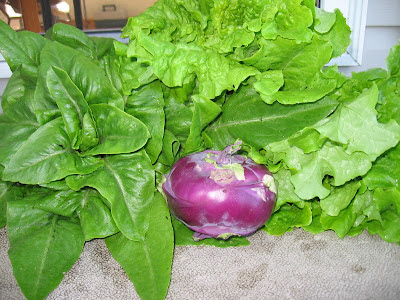 The beds are mostly planted up now.  Due to the warm spring most of the plantings were moved up about two weeks on average.  The tomatoes, peppers, and eggplant were set in a week ago.  A few stragglers haven’t gone in yet – two okra plants, a Diva cucumber plant, and the last set of brassicas that aren’t quite ready for the great outdoors just yet.  The first patch of Provider green beans was planted about a week ago.  Provider is supposed to be a little more cold tolerant than most green bean varieties, so it was the first bean planted.
Posted by gardenvariety-hoosier at 1:53 PM

That is a nice looking kohlrabi! Mine are sizing up now but still a little ways off from a first harvest. Your harvest totals year to date are quite good and it looks like the garden is picking up the pace for you now.

Kitsap - yes I'm very pleased with what I've been getting so far, crazy weather and all.

your kohlrabi is beautiful! And love the bright greens. Sounds like most gardens are picking up now with the warmer weather.