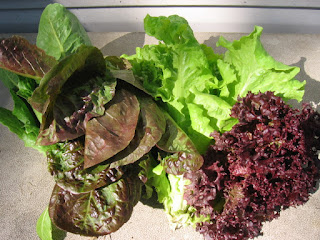 The spinach is Burpee’s Doublechoice hybrid.  This is my favorite spinach.  A real spinach flavor, thick leaves. 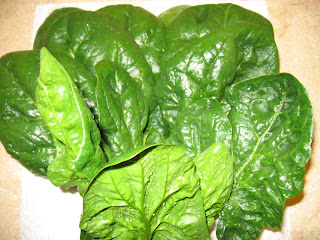 Here in the midwest this is a critical time of year, when plants are getting established.  All the summer crops – tomato, pepper, eggplant, squash, okra – are planted now.  The plants will grow a lot just in the next two weeks.  By Memorial Day most of the beds should be covered in green.  Many of the plants are one or two weeks ahead of schedule because of the warm weather.
This is the greens bed, the bed that has produced most of the green vegetables so far.  There’s still plenty of lettuce and spinach in there.  How much I get will depend on the weather.  So far it’s been seasonal, except for several days in the 80’s in early May.  The large plant with blue leaves is a Major Broccoli.  The head is just about ready to pick.  I’ll leave this plant in the bed after the head is cut and see how many side shoots it will produce. 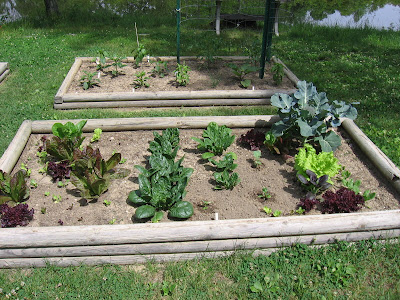 The solanacae bed.  There are two tomato plants, Supersonic and Black Krim, that are almost to the bottom of the cages.  There’s a Rosa Bianca eggplant and six pepper plants: Holy Mole, Carmen, Poblano, Hot Poppa, Franks, and an Italian frying variety whose name escapes me. 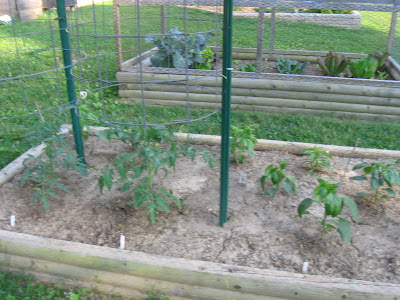 The brassica bed.  That’s a tatsoi with the spinach-like leaves and a sage in the front.  There was a gap in seedling production because of my travels so there are a lot of small plants in the bed right now, although some of the broccoli’s are sizing up.  At the far end there's two brussell's sprouts. There’s sugar snap peas on the trellis and a new variety of cucumber that I’m trying called Picolino. 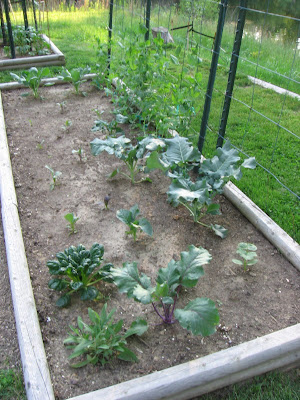 The onion bed with a row of carrots and some herbs in the triangle.  Lesson learned: onion seeds keep only one year.  It’s a mix of mostly copra from seed and red onion from sets. 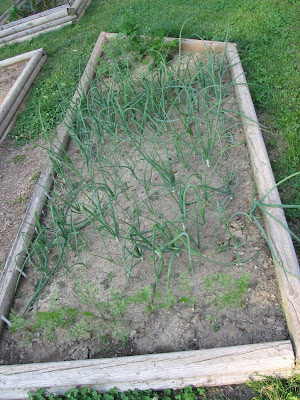 The squash bed.  That’s the last row of radish in the front.  The radish are usually out by the time the squash go in.  The squash were set out really early this year, the first of May.  The butternut is struggling, with some burnt leaves.  There were two nights with lows in the 40’s, maybe that did it.  The Honeybear Acorn and Cocozelle summer squash are doing OK.  I set in two seeds around each transplant for backup. 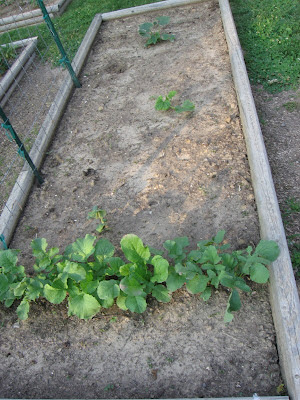 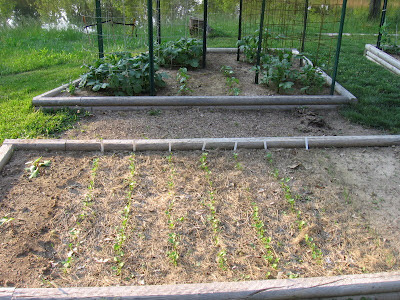 Time to keep my fingers crossed.  There’s little bug pressure this time of year except for cutworms, and sprays of Bt around new seedlings appear to be keeping them under control.  Probably the biggest concern are late spring storms, but we haven’t had any yet that are damaging.  Cheers.
Posted by gardenvariety-hoosier at 4:57 PM

I love your raised beds. What do you work into your soil?

Be sure to post pics again Memorial Day so we can see how much everything has grown!

Your lettuce and spinach look so very yummy! Lots going on around your garden too.

That lettuce mix looks like a nice blend. My favorite to grow is a blend that Territorial Seed puts together - the resulting bed of lettuce is so pretty with the mixture and the salads that it produces are interesting and tasty too!

Your garden is really growing well and it looks like most things are in now. I am at the same point too - done with the big push of spring planting, just filling in things as needed, weeding, watering, and watching things to start harvesting them when they are ready.

Patricia - When I built the beds I trucked in several yards of compost and mixed it in with the clay soil. Since then I add my own compost. I use kitchen scraps, shredded oak leaves which are the bulk of the compost, and the remains from any fish I catch and eat from the pond. Also some blood meal in case there isn't enough nitrogen in the mix.

WbrookCT - I don't know why your comment didn't publish but Blogger can be a little fickle. As for the septic tanks I had the same concerns. I have a two tank system. First the effluent goes into a settling tank and then overflows into a dosing tank. The dosing tank has a pump with a float that pushes out the liquid into the septic field. The line goes about 30 feet directly away from the vegetable beds before splitting into 5 drain lines. From what I've read the microbial action of the soil in the drain field completely breaks down any harmful pathogens or chemicals. I took up a sample of water in the dosing tank and it is close to gray water with very little odor. I have to believe that there is no chance of any E coli surviving a trip through both tanks, going through the soil microbes in the drain field then migrating at least 40 feet through clay soil to my vegetable beds. It's important to not add bleach or harsh chemicals to the waste system so the tanks can do the initial job of breaking down things. Ten feet is a little close and you may want to look at which way water flows. Does it flow downhill from the field toward the beds? It the beds are above the level of the drainpipes you should not have a problem in my opinion.