It’s a disappointing harvest this week.  The tomato plants went through another lull in production.  I think the first gap in production in early August was due to the bout of blossom end rot that affected the Supersonic plant.  The current slowdown is the after effect of the heat wave in July that stopped both plants from setting any fruit for a while.  It looks like more tomatoes will be ready later this week.
The bean harvest was off also as the currently producing patch is finishing up.  I pulled up the two rows of Roma beans on Sunday.  I expect one more harvest of the Dragon Langerie beans before they are pulled up later in the week.  That’s OK because replacements are ready.  The next patch of beans fills the former potato bed.  The Roma bush beans are thick with beans almost ready to pick.  The Kentucky Wonder beans in the cage are blossoming now.  Beans are a vegetable that I think is nearly as good after freezing as it is fresh, and I never get tired of beans.  Yeah I’ll be freezing lots of beans in a few weeks. 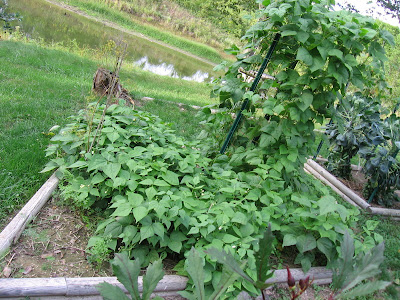 The red okra continues to produce steadily.  Last week I prepared three pints of okra/hot pepper refrigerator pickles.  They’ve got coriander, dill seed, dill weed (from the garden) and garlic in the mix.  I held out about 5 days then opened the first jar.  Hot pickled okra is a favorite of mine, and these are spicy hot and full of flavor.  I don’t think canned okra would be as good because the okra would be cooked and mushy.  At first I thought there was too much coriander, about two tablespoons per jar, but now I’m liking it.  After emptying the first jar except for the peppers I just stuffed more okra into the jar.  It ought to be good for two go rounds. 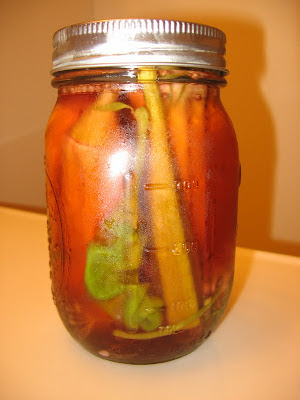 The deep red color of the okra faded a lot in the pickling solution. 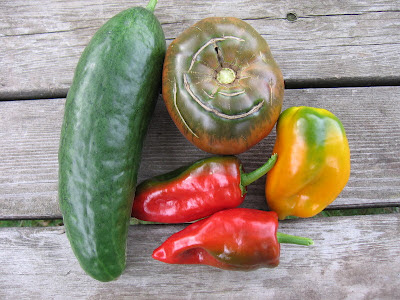 This is the only picture I took of the weeks harvest, on Friday.  That's a Black Krim tomato.   Yields this week:  Beans 31 oz, okra 4 oz, peppers 5 oz, cucumbers 10 oz and tomato 8 oz.  Also fish filets 8 oz.  Totals are in the spreadsheet under the 2012 tab.   To see the vegetables other growers get out of their backyards, see http://daphnesdandelions.blogspot.com/
Posted by gardenvariety-hoosier at 4:09 PM

That okra hot pepper refrigerator dills look and sound delicious! We enjoy beans frozen or canned as well and they are a staple of our preserved summer harvests for winter use. I am having a particularly productive green bean and summer squash season and I feel like I have been harvesting them forever and more is coming along. I know I will love them when we eat them in the dark days of winter, but right now I am kind of squash and beaned out for the season. ;)