Usually I total up the pickings on Monday, but yesterday I stayed home to get some work done around the house.  The workshop and pole barn were badly in need of some organization.  There’s no internet connection at the house since my choice is between dial-up and satellite, so I had to wait until today to post.

The past week has been cloudy and cooler than normal.  A frost advisory was issued for Monday morning but it turns out the temperature got just below 40 degrees at its lowest.  The low temps have slowed but not stopped production and I got decent yields for the week.  Monday the catfish had vamoosed.  Every day they gather around the deck in the late afternoon expecting an evening meal, until yesterday.  It looks like the cool days have sent them into deeper water for now.  I really wanted a catfish dinner last night but they had other plans.
I pulled up some carrots.  Some are a little malformed but they’ll be fine in beef stew. 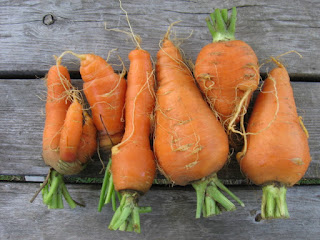 I got some more bush beans, mostly Romas with some Providers in the mix.  For the week 2.4 pounds of beans.  If we get some more sunny days there should be lots more beans. 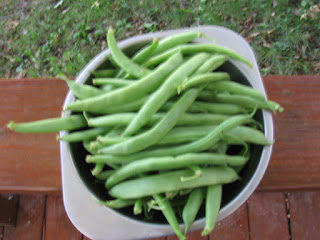 And a few Supersonic tomatoes 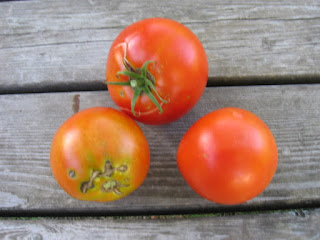 Here’s a chart of the totals for the year.  Not quite 150 pounds.  It’s been a difficult year.  A number of summer crops had gaps in production.  So far the top producer has been the cucumbers, most of that from one Diva plant.  Tomato production is way down, not even 15 pounds this year.  I’m hoping for more tomatoes before it frosts. 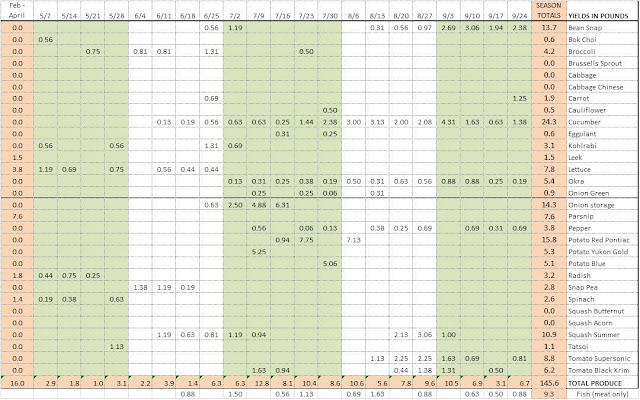 I hear you on the tomatoes. I have a bunch of lovely green ones and suprisingly healthy plants for this late in the season, but our day time temps are only getting to the upper 60's - low 70's at best and night time temps are down to about 45 to 55 degrees - so the tomatoes are crawling along on growth and will have to eventually be brought in to ripen off the vine. Waiting until I absolutely have to though because the longer they grow and mature the more likely I will be to get them to ripen.