We are into fall.  No turning back now, the days are shorter and cooler.  The trees are turning earlier than normal, the summer’s heat and draught followed by a cool September are hastening the change.
Except for beans and the last planting of cabbage crops the plants have slowed down a lot.  There’s been a few sunny days to keep things moving along.  These bush Romas are fantastic.  They are Roma II’s from Park Seed.  They markedly out produce the older Roma cultivars that I planted last year.  Big meaty beans with great flavor.  To date I’ve picked 17 pounds of green beans and put six quarts in the freezer. 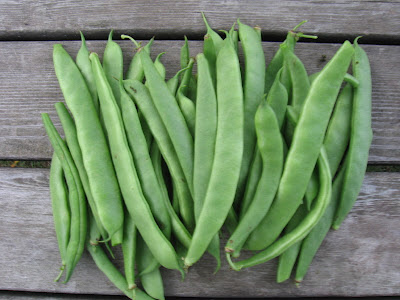 Here’s a real bonus.  I seeded this cauliflower (Burpee’s Summer Harvest) indoors on April 17 and set it into the bed on May 8.  The plant stopped growing during the heat wave in July, but when the weather cooled in mid August it resumed growth.  About 10 days ago it started forming a head, and this morning I picked it.  In late July I had picked an earlier cauliflower in the middle of the heat wave.  It weighed half a pound and was a little rubbery.  Not this head.  It’s over one and a half pounds and the head is dense and crisp.  Next year I'll have to think about planting cauliflower to mature in September. 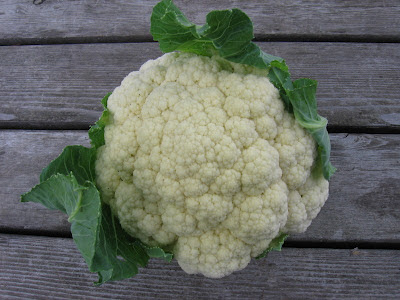 Some of this cauliflower will be pickled.  I made refrigerator pickled okra and hot peppers a few weeks ago and finished off three jars already.  Might as well reuse the pickling sauce with the cauliflower.  The peppers were too hot to eat and are still in the pickling sauce, so they should give some heat to the cauliflower.
Some more peppers.  The orange peppers are a Quad (????) sweet pepper.  I forgot to write the name of the pepper and the vendor at the farmer’s market just wrote “Quad” on the label.  The other pepper is a variety developed by the same vendor.  It’s very compact and is more suited to container growing. 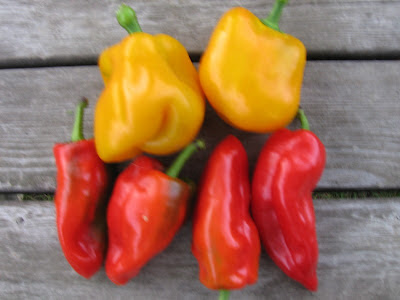 More red okra.  The cool weather has really slowed this down but I’m hoping to get a few more pods.  Initially I did not like this okra because it was hard to know when to pick it and the pods varied in size.  I’ve learned to pick the pods by color not size.  When the color starts to pale the pod is getting woody.  It’s best picked when the pods are shiny and intensely red.   Next year I plan to grow this okra in containers and grow a full-size okra in the beds. 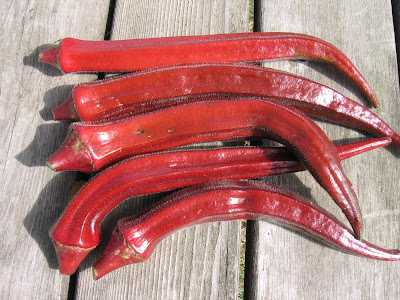 Posted by gardenvariety-hoosier at 3:48 PM

That is a gorgeous head of cauliflower. I don't even bother growing it anymore because it is such a fussy plant and there are other crops we enjoy more - but looking at that beautiful head makes me wish I had some in the garden. Your beans are obviously giving you a great last fall hurrah too.

Susan: Thanks. Kitsap: This is the first really nice head of cauliflower I've ever gotten. If I had needed the space the plant would have been pulled up last summer but it was the last of the cabbage family plantings for the spring.