Since spring arrived late this year there has been a lot of catching up to do with the usual spring chores.  The vegetable beds are the exception.  Work on those beds is mostly on hold for now as the cool weather plants are in and I’m waiting on the compost pile to work a bit more before preparing the remaining beds for summer crops.  That’s OK because there’s a LOT of work to do on the property.  The recent heavy rains damaged part of the levee which needs some repair and reseeding – a project I was considering but now needs top priority.


Four beds have been mostly planted in onions, carrots, parsnips, spinach, lettuce and cole crops.  That leaves four beds that remain to be planted in potatoes and summer crops.  The potatoes were scheduled for planting on April 18 but I’m going to put them in later this week.  Cold wet soil can rot the potato pieces so it’s better to wait when that’s a concern.  My rain guage showed 4 inches of rain Friday morning and 1 inch of rain Thursday morning – 5 inches in two days – and the soil is well saturated right now.


The front bed in the pic is the potato bed and the back bed will be the squash bed.  I won’t have to prepare  the squash bed or the tomato/pepper bed for two or three weeks – more time for the compost to finish. 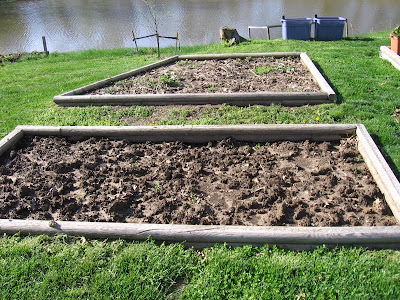 The seed potatoes - Kennebecs and Red Pontiacs - are on some damp wicking cloth and sprouting eyes.  The compost pile, which got a late start this spring, is hot now and getting a little more finished each day.  At the end of the week I’ll put a wheelbarrow load of compost into the potato bed, add some fertilizer, hoe the bed and plant potatoes.  Last week I turned the soil over with a shovel.  Last year this bed was planted in parsnip.  I’ve noticed that any bed that was previously planted in parsnip is very easy to spade over the following spring.  Parsnip does a great job of breaking up soil.


This is the “greens” bed, which was covered with a plastic greenhouse over the winter.  There’s lettuce, the first set of cole crops and overwintered spinach.  There’s going to be a lot of spinach soon but that’s OK, spinach is at the top of the list of my favorite vegetables.  The greek oregano, thyme and garlic chive at the upper end came back strong this spring. 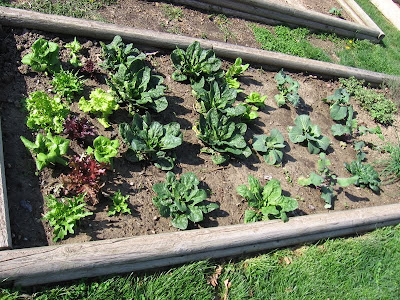 I harvested two spinach plants this week, 8 oz in all.  Spinach has quite a taproot. 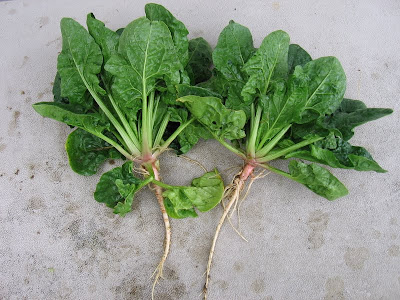 The brassica bed has the second and third set of cole crops.  I put in the most recent batch on Sunday.  There’s Major broccoli, Kolibri and Grand Duke kohlrabi, Gonzalez cabbage and Summer Harvest cauliflower in there.  The larger cole crops in this bed are the same size as the first batch in the greens bed, even though they were seeded 12 days later, a reminder of the cold spring weather. 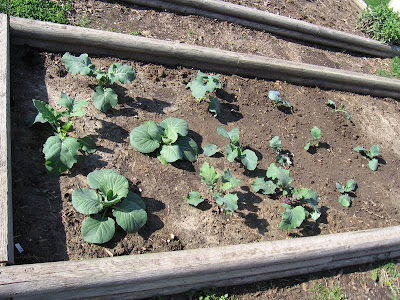 All of the lettuce, a pound so far, has come from the Earthbox.  As soon as I pull up a plant another one takes its place.   This week I harvested 7 oz. 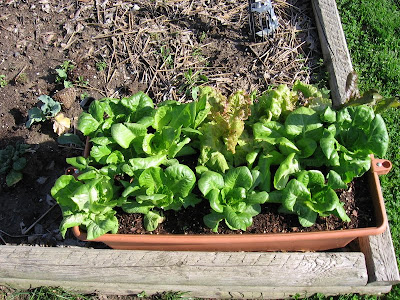 I’ve abandoned some plants this year – no radishes or sugar snap peas.  I usually plant radishes on the fringes of the squash bed but the soil was frozen so late I gave up on them.  The peas have been stopped by a heat wave after Memorial Day for the past three years.  I love snap peas but it looks like the rewards don’t justify the short time of production.


Here’s a reminder of how tough plants can be.  I had some extra broccoli, tatsoi and cabbage seedlings when I planted a set two weeks ago and tossed them into the next bed.  Did they die?  Nope they sent roots into the soil and kept growing. 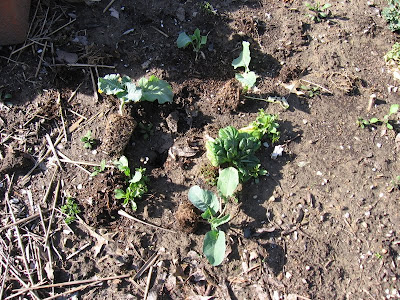 Posted by gardenvariety-hoosier at 2:21 PM

Oh all that rain Lucky you!! we finally got 14mls and I'm excited!!! Yey for spinach I don't think you can ever have too much, my chickens love it too.

I had not come across the term "cole crops" before. Presumably this means the same as "brassicas"? I know that kale is sometimes known as Borecole, so presumably this word comes from the same linguistic origin.
I wish I could grow spinach like yours. Whenever I try (and I have tried often!) it bolts before producing a worthwhile crop. I think my soil must just be too dry.

Plants are amazing resilient. I hope you are going to let those discarded items that tenaciously grew into the soil - keep growing there. :D

Sounds like you are starting to get into the spring groove and are making real progress on planting up the garden. Sorry you are skipping snap peas this year. Totally understand why but they are such a treat, I would hate to miss out on them altogether. If you were a bit closer I would offer my extras to you when the surplus hits in early June. Unlike you, we NEVER get warm around here until the Fourth of July and then it never sticks around for very long. Good for peas, brassicas, and greens, but not so great for peppers, tomatoes, and eggplants etc.