Well it's something anyway


Two ounces of spinach, that’s it.  I picked one plant from the overwintered spinach since it was crowding it’s neighbors.  This morning it went into an omelette.  Winter definitely wore out it’s welcome, although it’s not really welcome just tolerated and lately it’s gotten way past tolerable.  The first day of spring started at a chilly 16 degrees.  Last week we got 4 inches of snow although it melted in a few days.  At long last the past weekend was pleasant.  I expect that the spinach and lettuce will start growing now that the weather has warmed. 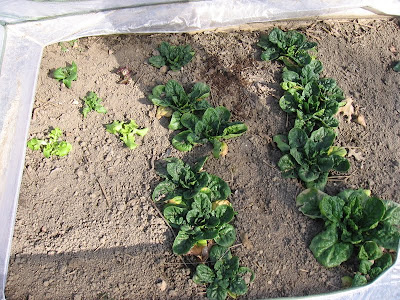 It’s not just that things have stopped growing but there’s a backlog of plants that were started indoors and need to go outdoors ASAP but they can't.  Three weeks ago the onion seedlings were moved from the indoor lights into the mobile greenhouse/coldframe where they’ve been in a holding pattern until the weather improves and the soil warms.  The lettuce that was planted in the earthbox in February has done very little, in fact it was nearly killed by the hard freezes in March.  (The little box holds a remote temperature sensor so I can monitor the coldframe temperature from my house). 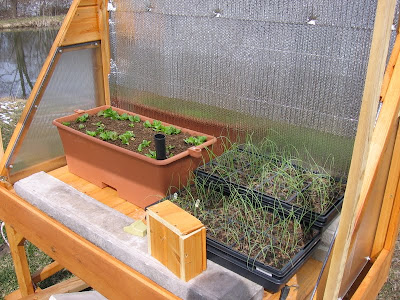 The second batch of cabbage crops should have gone into the beds about ten days ago but was still under the lights.  Last week I set them in the coldframe to make room for the next batch of seedlings in the indoor rack.  To make room in the coldframe the earthbox with the lettuce went out into the elements.  While moving the earthbox I muttered something like “you’re on your own lettuce.  Good luck.”  Possibly the first sign of dementia.

Last week I began preparing the onion and brassica beds by spading them over.  That’s when I regretted my choice of sowing two of the beds last fall with green manure mix.  Yes some of the plants winterkill but most of them don’t, and it was no picnic breaking up a thick root structure with garden tools, especially when the ground is partially frozen.  I spaded the soil over every few days, then went at it with the hoe, then last weekend ran the little Earthquake tiller through the beds.   A little more work with the hoe and rake and two beds were deemed ready for planting.   My back unfortunately was not ready for planting. 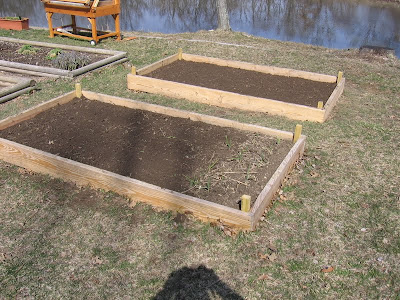 Fertilizer was added.  It's baked chicken poop.  I got it at the big box lumber store last winter, on sale at 6.99 for a 25 pound bag.  How can I pass up a bargain like that?  I’m a little worried about the high calcium content raising the pH of the soil, which is already too alkaline, but the fertilizer has a near neutral pH according to their analysis so I’m hoping it will not cause problems.  The calcium may help stop the blossom end rot that was a real problem on the tomatoes and peppers last year. 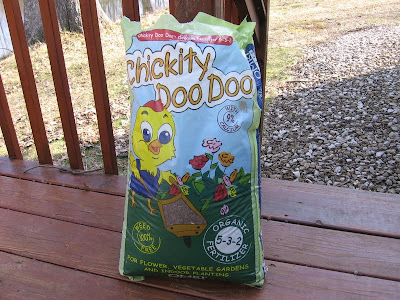 There were two trays of onion seedlings, 144 cells in all and most of them still alive.  I planted them 4 to 5 inches apart in the two prepared beds.  They were a little rootbound after being in the pots too long but should be OK.  I planted them in the center of two beds, kind of hard to see in the picture, and left the ends of the beds for carrots and beans.  There’s some garlic in the right side of the front bed. 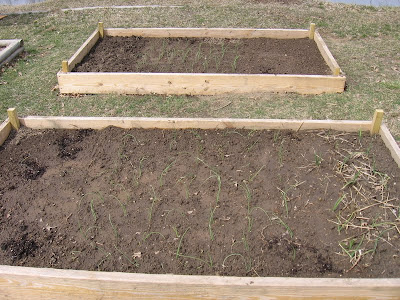 Then there’s the batch of cabbage, broccoli, kohlrabi and tatsoi in the cold frame .  Their bed is still not ready.  I took a good long look at the first batch of brassicas that were planted in the bed under the plastic greenhouse.  The hard freezes had taken their toll.  Only the tatsoi was healthy.  Most brassicas don’t recover all that well from an early setback.  They may or may not resume growing but are likely to taste ‘off’ even if they do recover.  I pulled out all of them except the tatsoi. 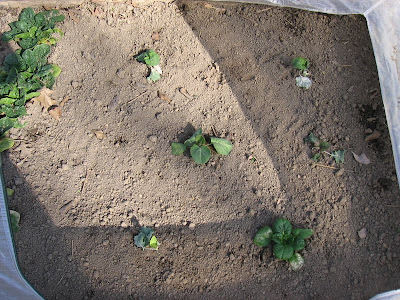 The brassicas that were removed were replaced with the batch in the cold frame.  One more cabbage seedling was added.  These plants are bigger than the ones I pulled up even though they were seeded two weeks later.  Now I have some time to get the brassica bed ready for the third set that is presently under the lights. 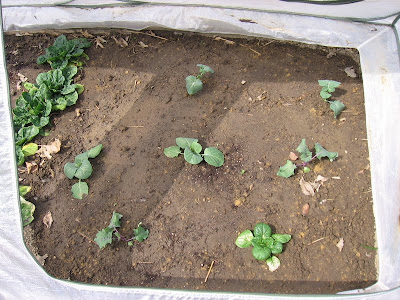 So that’s it – everything is about two weeks behind schedule and the first set of cabbage crops have gone to the great compost bin in the sky, time to accept it and move on.  And the earthbox with the lettuce?  Once the onions and cabbage crops were out of the coldframe the earthbox went back in.  No lettuce abuse for them.  For the moment things are squared away.
Posted by gardenvariety-hoosier at 3:53 PM

I am running behind schedule too and I don't have weather to blame for it... just me being less organized than usual with my time. You are making definite progress in your garden tasks despite the weather keeping you held back.

grow, grow, grow! I hope it all does well for you. I bet you will be surprised at how tolerant the seedlings are.