There are projects that you choose to do and projects that must be done.  The latter kind of project is often one that you weren’t planning on doing.  In the space of a week the rains totalled 7 inches by the rain guage, with 4 inches in one night.  I don’t think the pond overtopped the levee, but the heavy rain washed out a gash on the back side, thanks to the lousy repair job I did after the floods of 2008.  Vegetation will eventually grow in that stone/clay fill that I added and the root system will anchor it, so I thought.  Weeds never even sprouted in that stuff, and it took this rain to wash it away.


So now it’s a real job.  I know it’s got to be fixed quickly and vegetation must be established.  Six yards of dirt were delivered on Friday.   The same day I cut the wild rose and blackberries that grew around the gash.  Many of the blackberry vines were cut last fall, thank goodness.  Working in a tangle of thorny vines on a steep slope with a chainsaw is not much fun, to understate a bit.  Once the vines were cleared from the gash concrete blocks were set in to backstop the dirt.  So far I’ve put 2 1/2 yards of dirt and even more blocks into the gash.  There’s lots more to do. 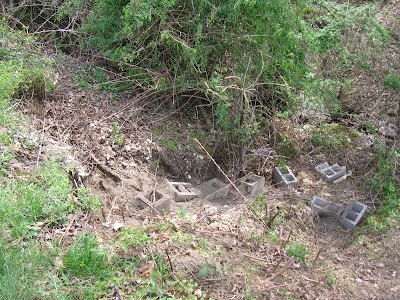 By this time I expected to have underground feeder wire set in a trench from the house to the pole barn and be working on wiring that building.  Well I bought the wire anyway.  I’ve also been building a mobile rabbit pen, repurposed from the chicken tractor I built years ago.  I’ll have to get a welding shop make an axle holder when I get the time, but for now there is no time.  Too many projects, arghhh! 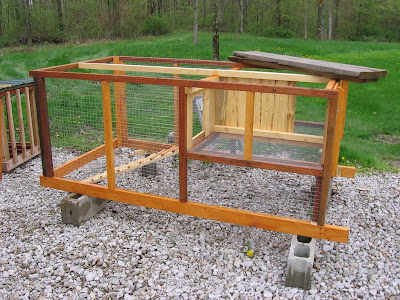 On a brighter note the Peterson bluebird box that I built last winter has attracted a pair of bluebirds.  Hope they do well in their new home.  I’ll try to get a picture of them when I get the opportunity.  This morning two males had a territorial dispute near the nestbox.  They literally locked onto each other and fell to the ground in a battle royale. 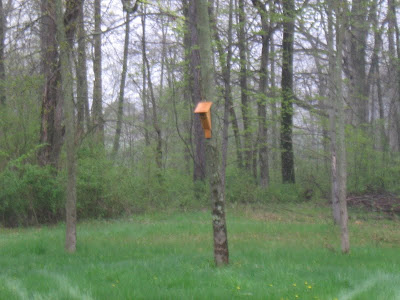 And the garden?  The soil is still too wet to plant potatoes, but not too wet to set out another batch of cole crops.  I like to set out transplants on cloudy days like Sunday, as the biggest shock to the seedling seems to be the change from artificial light to direct sunlight.  There's one more set of cole crops under the lights that will go into the beds in about two weeks.  I'm hoping that by then some of the kohlrabi will be ready to come out.  There's no more room. 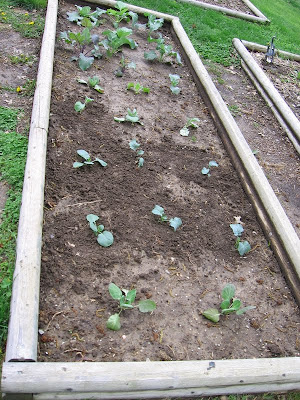 Saturday I bought some peppers at the Bloomington farmers market and transplanted them into larger pots.  I bought one each of Jalapeno, Lipstick (I think it’s similar to Carmen), Ancho and Corro di Torro Rossa, a bullhorn type pepper.  They join two Cabernet peppers that I seeded, a hybrid by Burpee’s that is supposed to be part Marconi.  Millionaire and Silver Queen okra and Lavendar Touch eggplant were seeded on Sunday.  Diva and Picolino cucumbers were seeded last week.  Next week I’ll buy some tomato seedlings and put them in bigger pots. 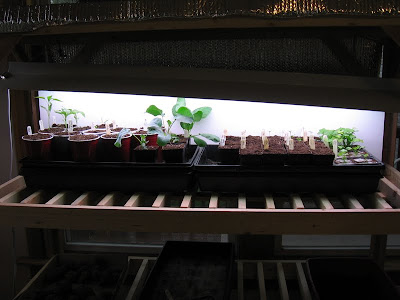 I picked more lettuce (14 oz) and more spinach (4 oz).  The earthbox has yielded nearly two pounds of lettuce so far.  When a large plant is pulled the small plants in their shadows quickly grow up and take it’s place. 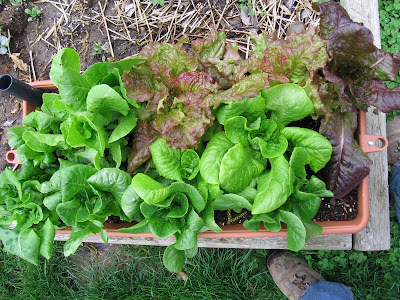 Posted by gardenvariety-hoosier at 2:09 PM

Looks like you're going to be busy again! I'm so glad we haven't had 4 inches of rain in one night...

Man, we'll take some of your rain down here in NM! I'd gladly trade several inches for some of our drought ;-)

diary of a tomato said...

A day of unplanned chores can sometimes be satisfying in itself! Looks like you have the perfect combination of woods and open space that bluebirds prefer. We've a vacant bluebird house if the losing male is still looking...

Diary: If only it was a day, but it's more like a week. I'm making good progress though, so I can't complain.

Too bad about the levee but it looks like you caught it before a major disaster occurred. You are right about time, there is never enough of it.