Going forward it looks like continuous production from the garden until fall.  Right now it’s only spinach and lettuce, but in a few more weeks there’ll be cole crops, that is brassicas.  (I’m going to call them cole crops from now on because Word tries to respell brassicas into basics everytime I type the word and it’s starting to get annoying).  The trees are starting to bud out now, the grass needs cutting and the mole is rampaging through the beds. It must be spring.


I picked the first nice-sized spinach plant.  This is Burpee’s Double-choice hybrid.  I’ve tried a number of spinach varieties, including the popular Space, but for my tastes I like this one the best.  It also overwinters well.  For the week I picked 5 oz of spinach and 7 oz of lettuce.  Spinach omelettes for breakfast! 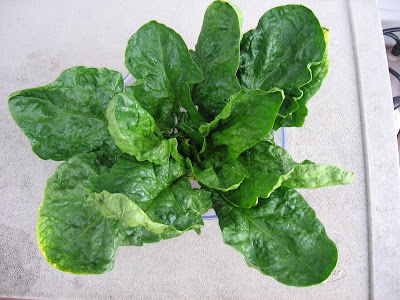 The Phoebe is a handsome little bird in the flycatcher family.  A few years ago a pair nested above one of the sensor lights and raised a brood, unfortunately a cowbird laid an egg in the nest and the cowbird nestling pushed out the phoebe nestlings.  When the cowbird nestling was larger than its surrogate parents they abandoned the nest.
Yesterday I noticed a pair of phoebes were hanging around the lights.  Since I don’t want them nesting on the lights I looked into building a nest box for them.  I found out that phoebes are ledge nesters.  They don’t want an enclosed box but an open ledge for their nest.  I checked at Lowes yesterday but found no ledge nests.  So I built one from scrap wood.  The design is adapted from a plan in a book.
This morning they had started building a nest over the light.  I got busy and built the ledge box in a few hours.  Once finished I removed the nest they were building and installed the ledge box next to it.  That may sound a little brutal but I really don’t want a nest on the lights – if there’s a brief power interruption the lights will stay on and the heat may catch the nest on fire.  So I’m hoping the birds will recognize the superior qualities of the new nest site and build their nest in the box.  We’ll see. 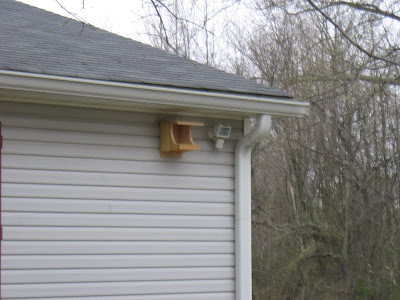 I plan to build some more of these.  They are easy to build and I think and I think one can be built from a piece of 1” x 8” cedar.  Once I work out an efficient design I’ll publish the process.  Ledge boxes like this can be used not only by phoebes, but robins, barn swallows and cardinals.
Posted by gardenvariety-hoosier at 4:00 PM

Spinach and lettuce sound really good to me. I am behind on my spring planting but hope to sow some lettuce and spinach this week.

I hope your phoebes recognize that your nest box is a much better place to build a nest.