Sunday was another long workday in the yard.  A lot of rain has fallen the last week and after a few days of sunshine it was finally possible to get some work done.  The lawn is still a little bit squishy though.  Finally, I got a decent picking of the overwintered spinach, a few weeks later than normal but better late than never.

The spinach really sized up with the sunshine. 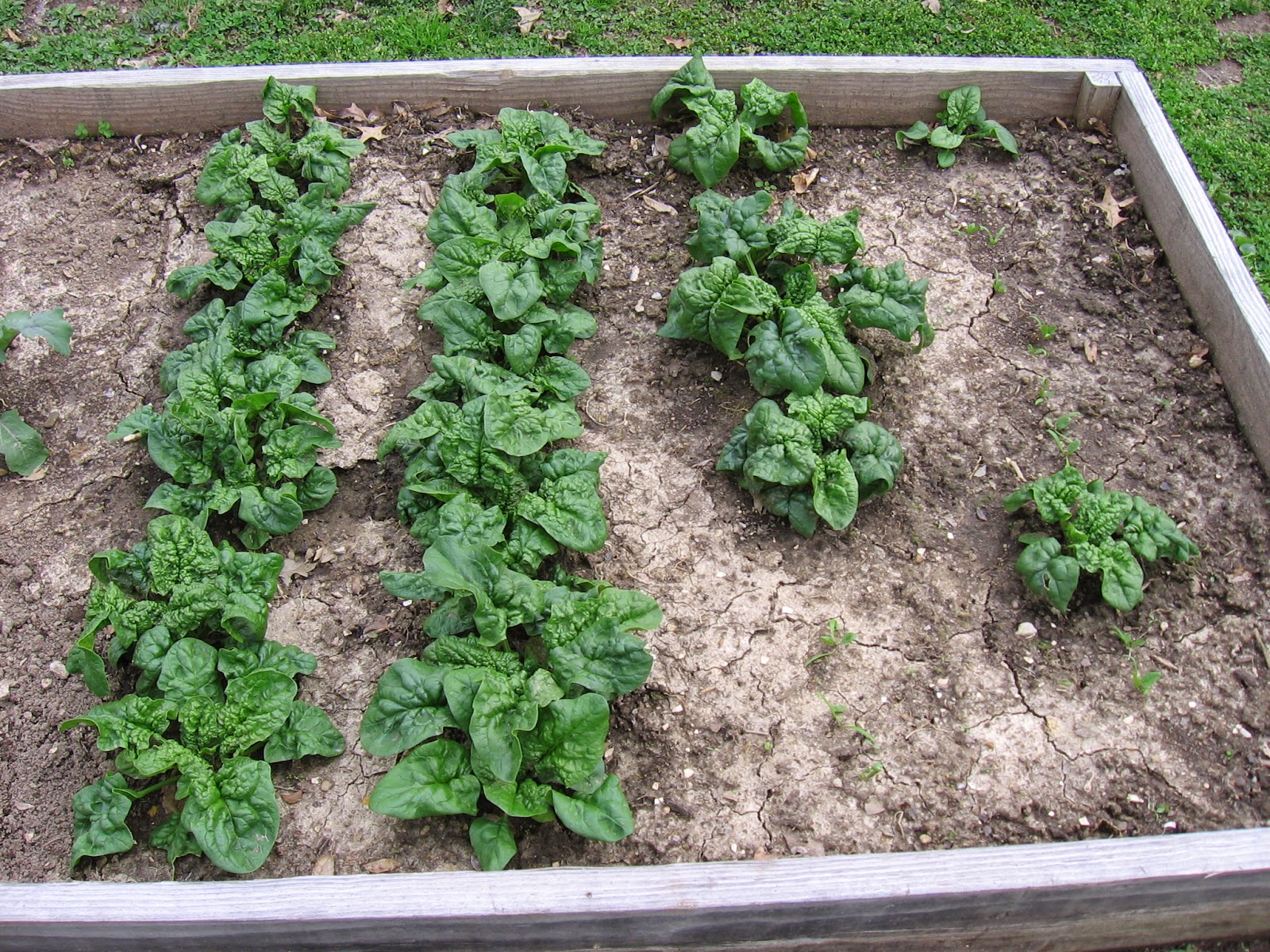 I picked the largest plant and a few other plants to relieve crowding.  Ten ounces in all.  I tend to forget just how good fresh spinach is, far better than from the store.  Last night I made spinach alfredo along with some apple brats from my neighbor's pigs.  Simple but delicious. 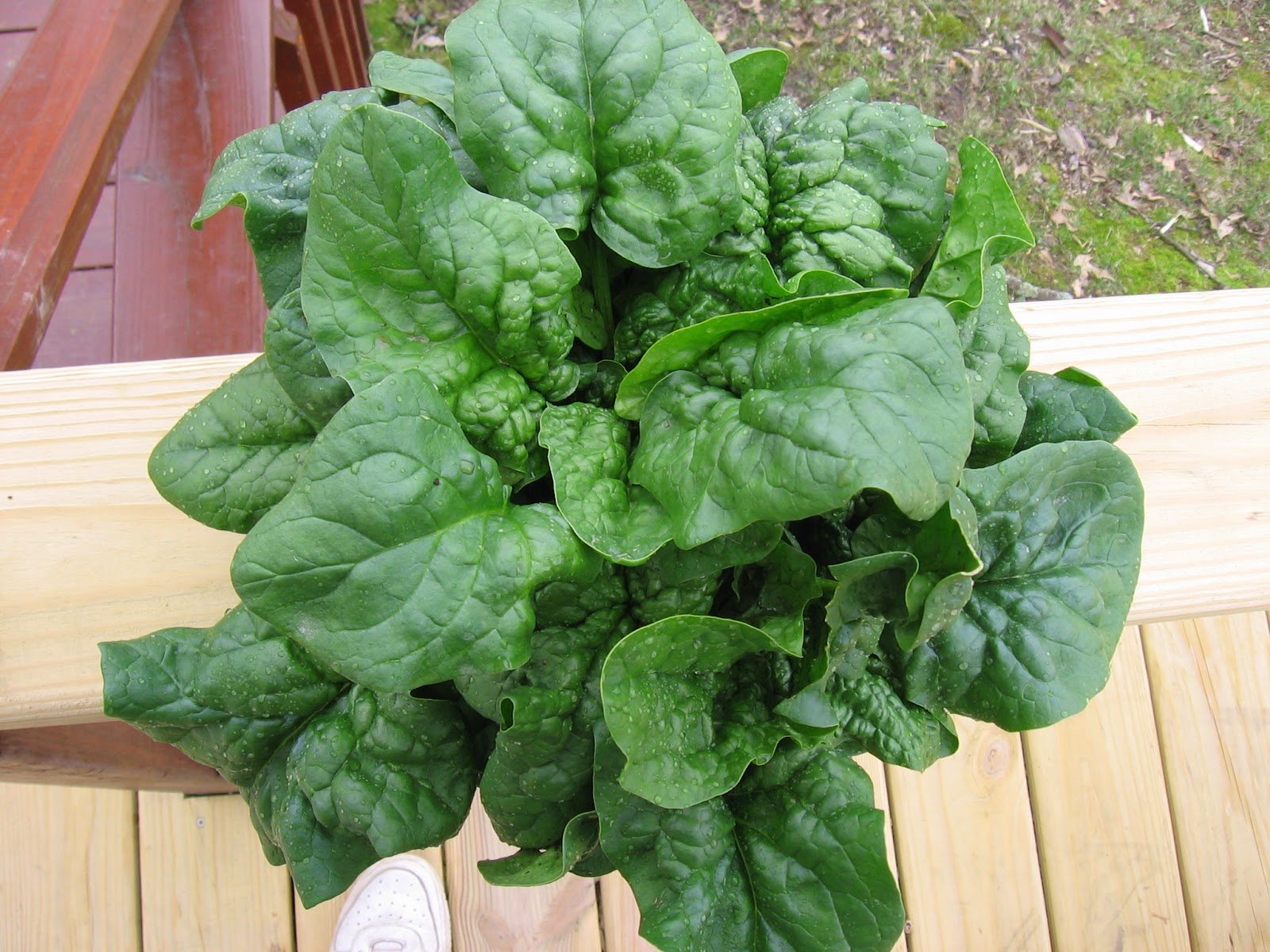 It's still hard to get away from the winter mindset but warm weather is definitely on the way.  The extended winter weather set back my seeding and planting schedule about ten days, but recently the temperatures have been warmer than average and the soil temperatures must be warming to what is normal this time of year.  Things are going back to schedule.

The asparagus I planted last year is finally sending up shoots.  Some sources say it is fine to pick a few shoots the second year, others say wait until the third year.  The plants looked very healthy last year.  My inclination is to wait and maybe harvest a few spears later, once I see that the plants are doing well. 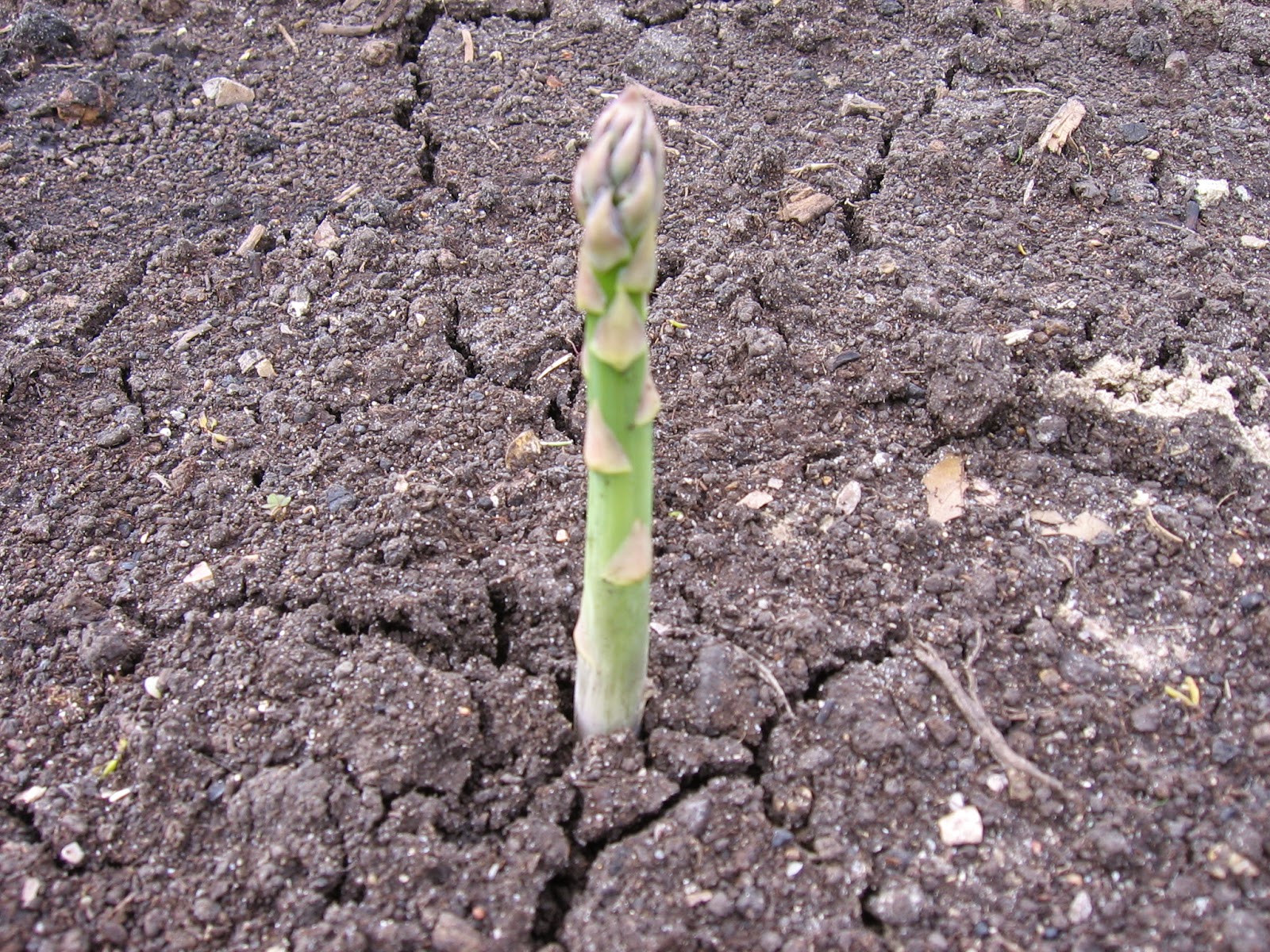 A trellis was built for the raspberry bushes - steel fence posts and galvanized cable.  I put a cable at about twenty inches and four feet high.  Later I may have to add another support at the top of the posts. Three Caroline and three Autumn Bliss plants were planted last year, both primocane varieties that bear in summer and fall.  I got a few pickings of berries from them last autumn, and expect much more this year. 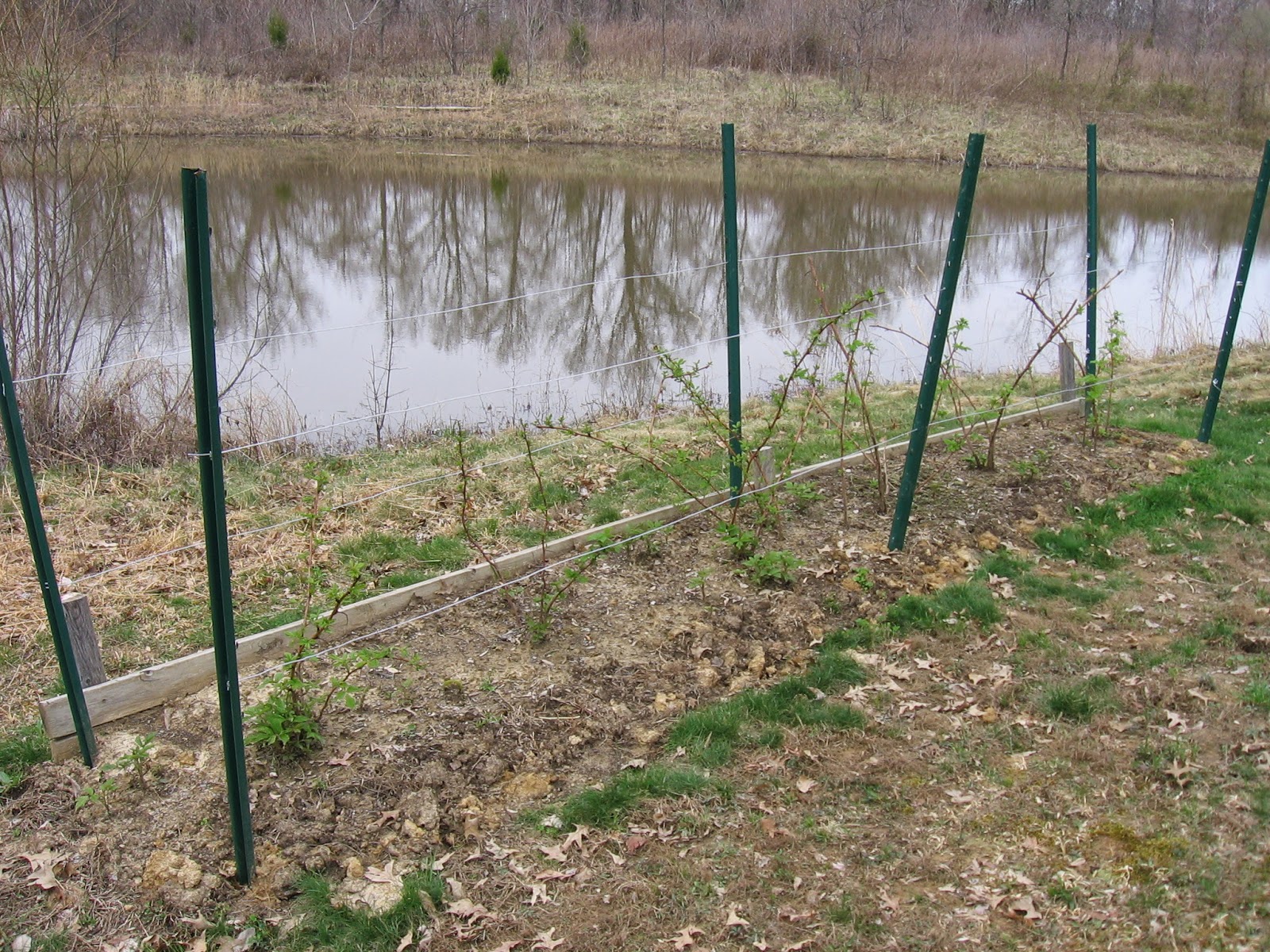 The garden soil was finally dry enough to tranplant the onion seedlings into the bed, about eighty of them.  This year I just "eyeballed" the spots instead of measuring.  Garlic is on the left end of the bed, and the triangular end got a parsley and chervil seedling and was seeded with some cilantro. That makes two beds that are fully planted. 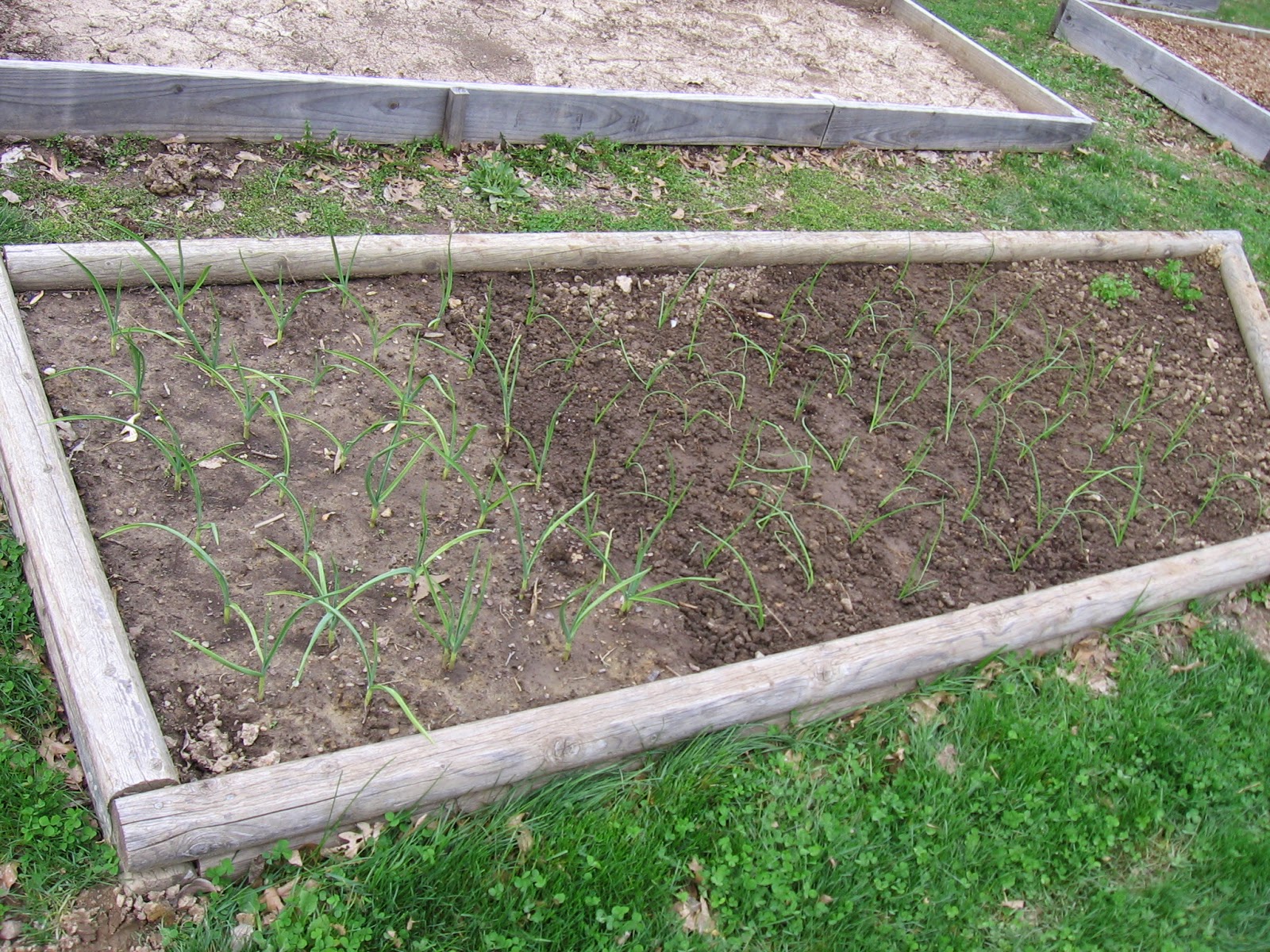 Getting most of the onions out of the mobile cold frame allowed room for the pepper plants to take their space.  Some of these I seeded, others I bought from the greenhouse and repotted into larger pots.  I'm partial to the plastic drinking cups for larger seedlings like peppers and tomatoes.  Night time temperatures are projected at well above freezing for the next ten days, so no worries there. 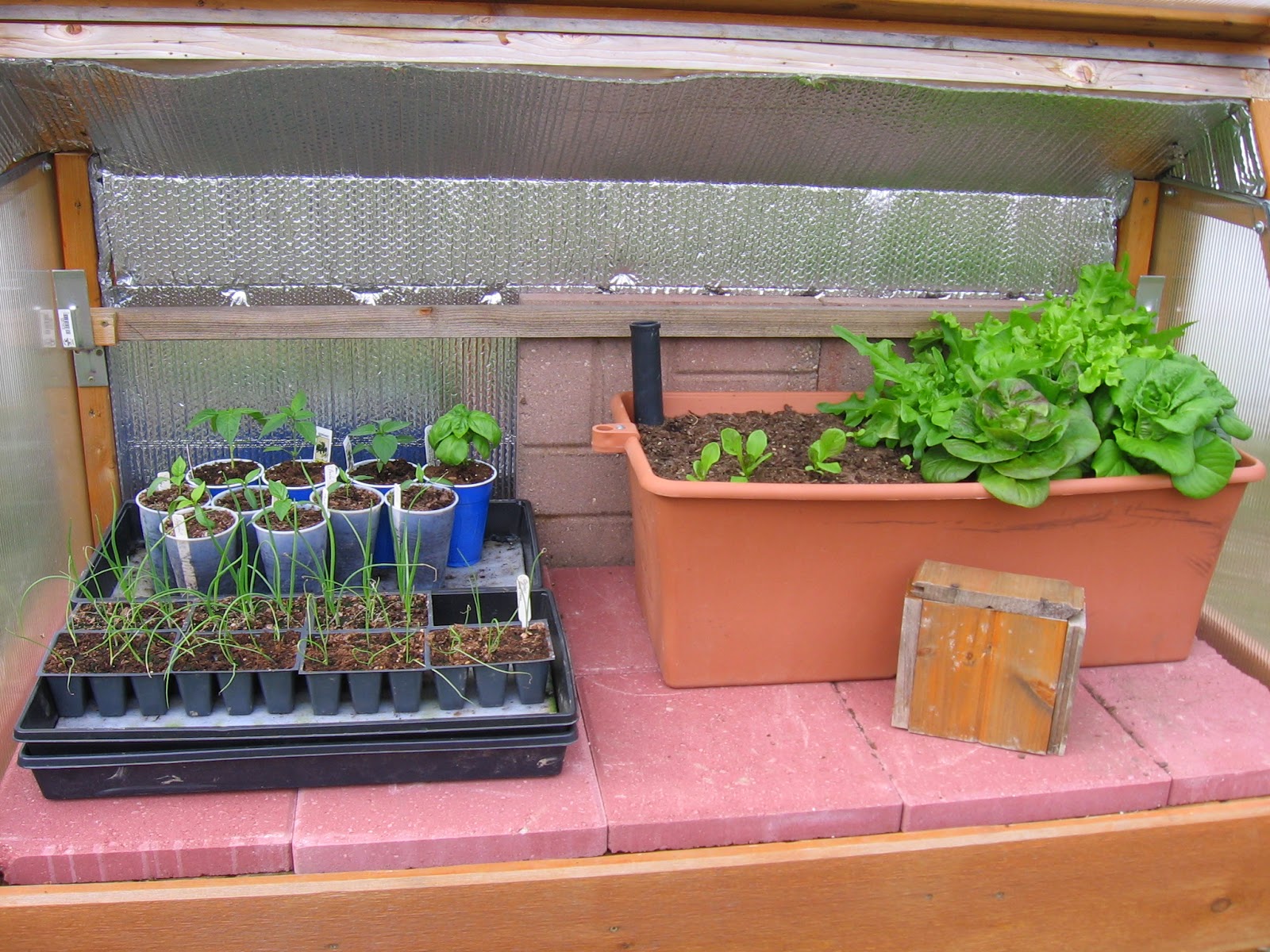 So far I've been able to use one growing light indoors by moving seedlings into the coldframe as temperatures warm, making room for new seedlings, like the okra I started this morning.  Soon I'll get the Earthbox out of the coldframe to make room for tomato seedlings.  To see what other people are getting from their gardens, head on over to http://daphnesdandelions.blogspot.com/
Posted by gardenvariety-hoosier at 1:18 PM

That spinach looks so good. I can't wait for mine to start growing. My asparagus is in its second year, but last year half of them died. The other half don't look too healthy, so I have no clue if I'll get a harvest or not. Probably not.

I'm with you on the taste of fresh spinach. The store bought version seems to have less taste to me. There's a lot of different opinions on harvesting a new asparagus bed. I believe we snuck a few spears the year after planting, then started cutting more in the third year.

I need to put up a trellis for our raspberries. So far I have let them grow unsupported, which is less than ideal!