Planting the garden continues.  Last week the onion seedlings went into the ground, yesterday it was time to get the potatoes in the soil.  Last fall I combined three adjacent beds into one large bed.  Mostly this bed will be planted in potatoes, sweet potatoes and squash, which will be rotated through the bed.

A few days ago the section of the bed that gets potatoes was fertilized and turned over with a shovel.  The ground was tilled with the little Earthquake tiller/cultivator to break up the clayish clods.  The tiller has a 43cc 2-stroke motor, not much but it does the job, and it's light enough to pick up and set in a raised bed. 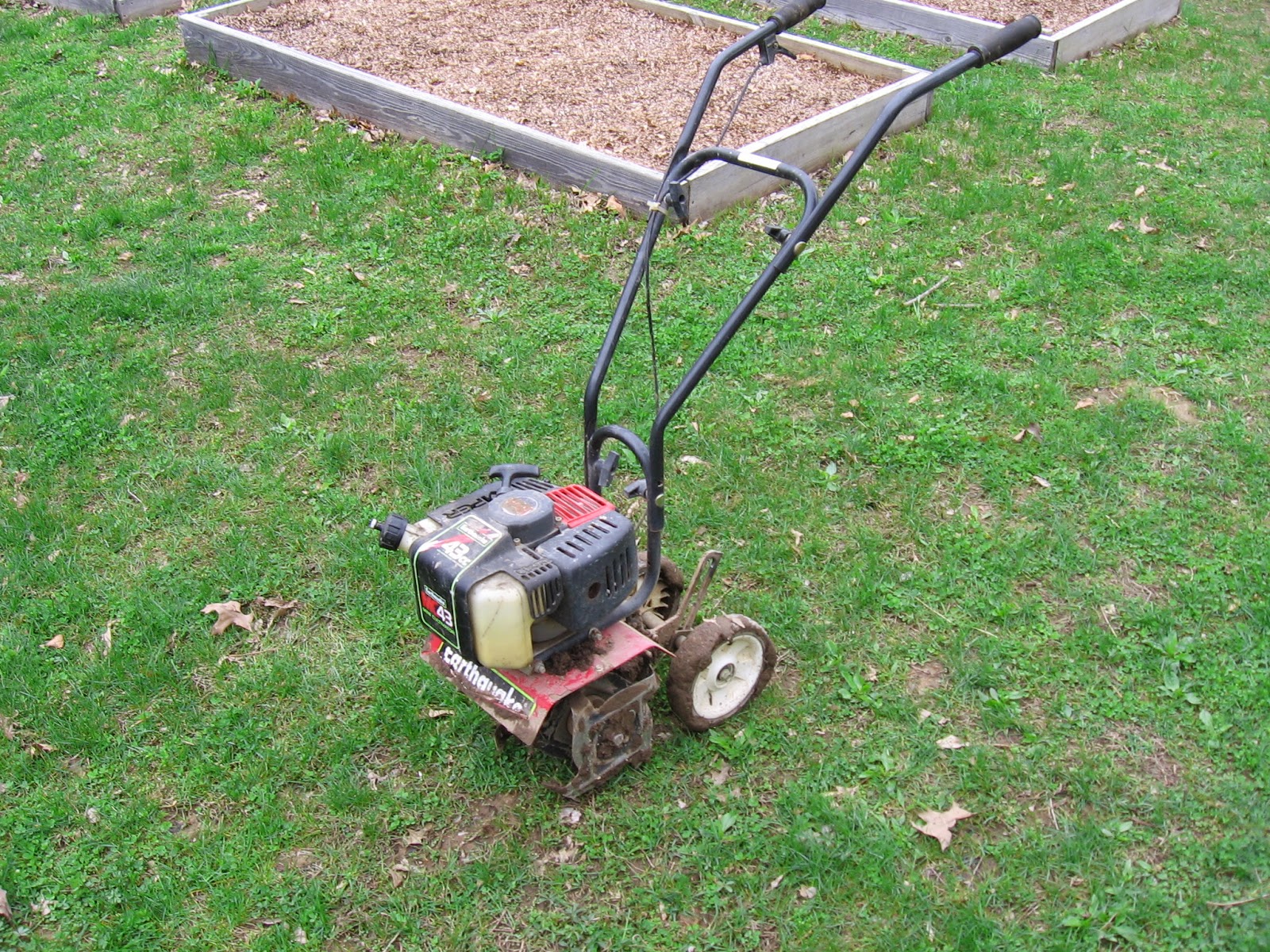 With the extra space the patch for the potatoes is a little larger this year, enough for 4 rows.  I marked off the rows at 21 inches apart.  A board was laid down to reach the inside rows without compacting the soil.  After dusting the seedling potatoes with sulfur they were planted a foot apart in the row.  I dug a hole for each potato with the tool shown and dropped it in, about 5 inches deep.  There are 3 rows of Red Pontiac and 1 row of Kennebec. 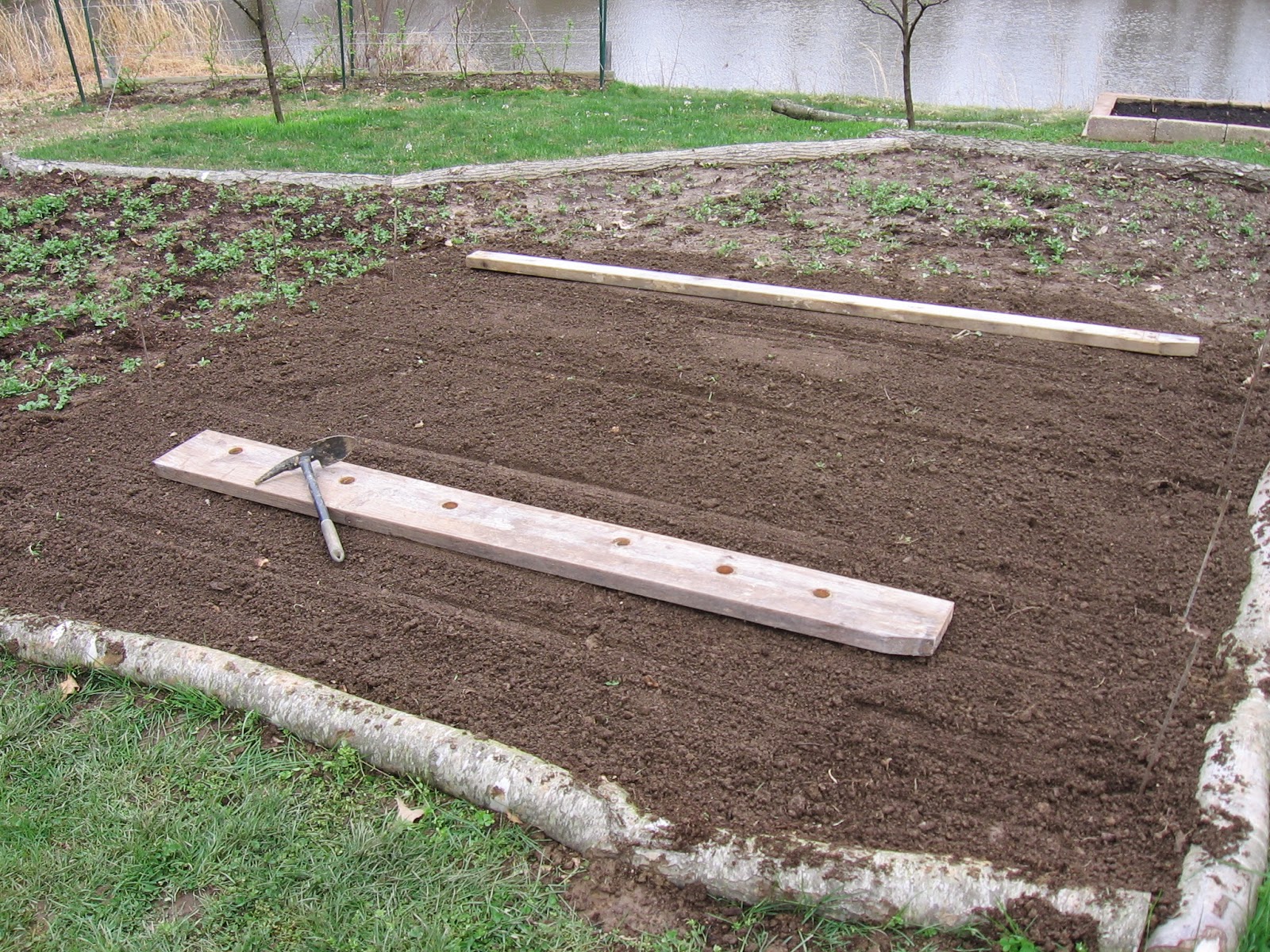 Once planted some sulfur dust was sprinkled on top.  For some reason squirrels like to get in and dig up the potatoes, which they won't eat because they are dusted with sulfur.  The sulfur on the soil surface seems to deter them, and it may help bring down the pH of an alkaline soil. 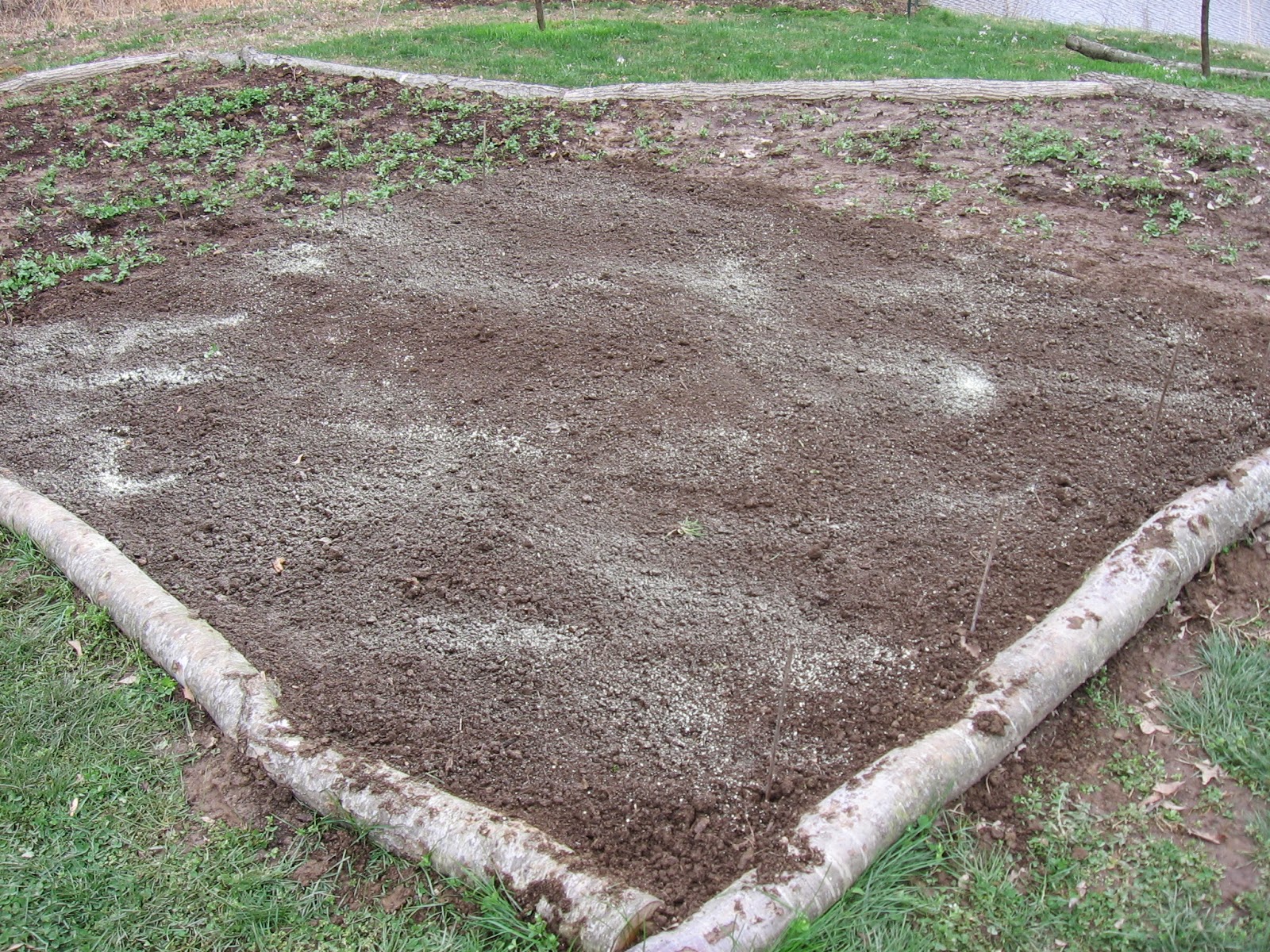 The sections of the bed that will get squash and sweet potatoes are now growing a cover crop of field peas.  They are coming along slowly and I'm hoping they put on a growth spurt soon. Mulching the potato patch was next.  Last fall two 4' by 8' beds were covered with a layer of shredded leaves.  Actually these beds were first layered with some compost, then covered with landscape fabric, then with the leaves.  I wanted to see if earthworms would thrive beneath the insulating layer of leaves and mix the compost into the soil, saving me the work. 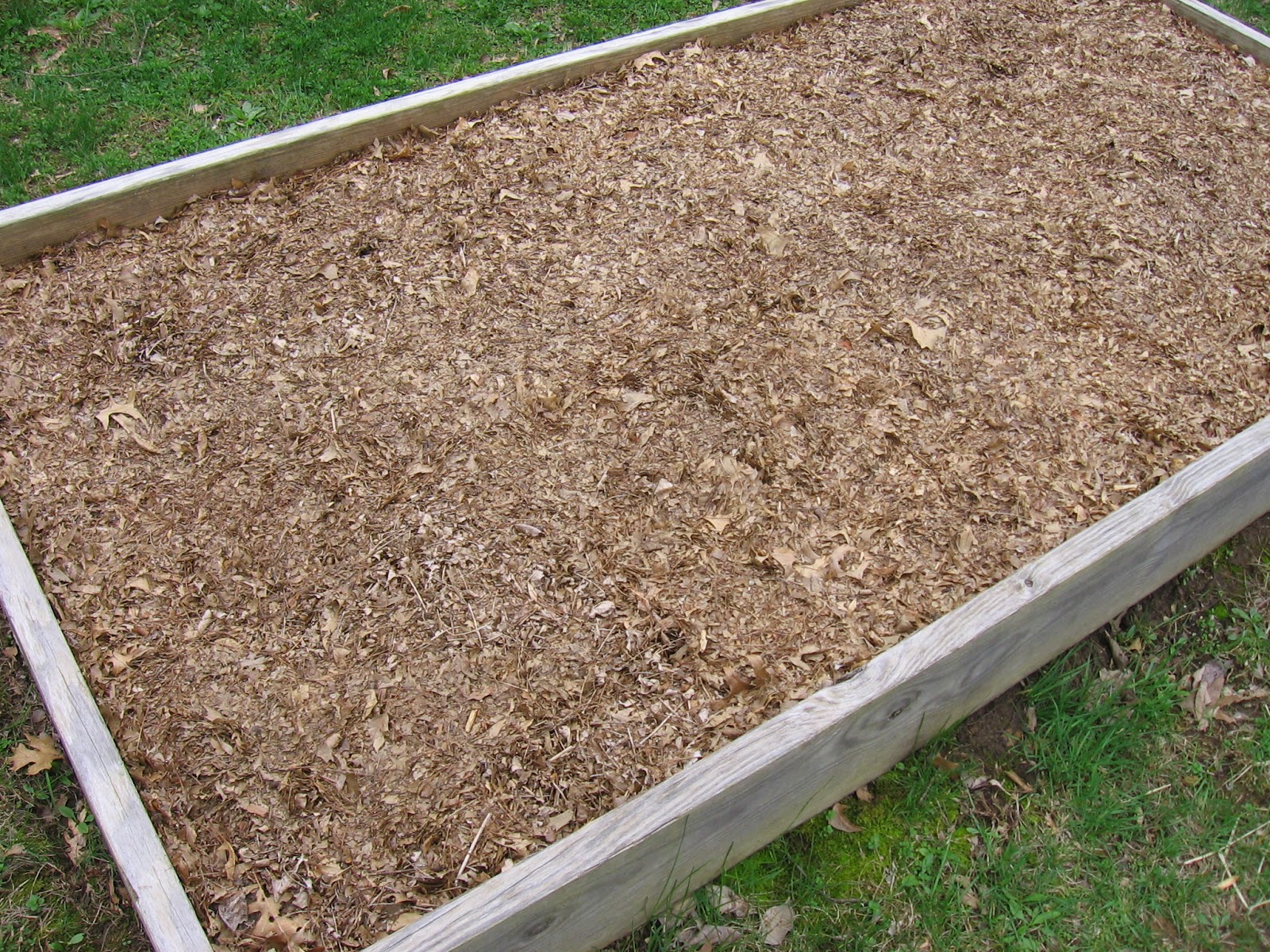 I raked off the leaves and pulled away the landscape fabric.  There were actually a number of earthworms laying on the surface of the soil, although they quickly burrowed underground.   I tested the soil with a hoe and found that it was nicely loose and friable.  When it's time to set in the tomatoes and peppers I plan to spread some fertilizer on the surface and plant the seedlings.  No tilling or turning over the soil, which will only bring weed seeds to the surface.  It's an attempt to transition over to no-till gardening. 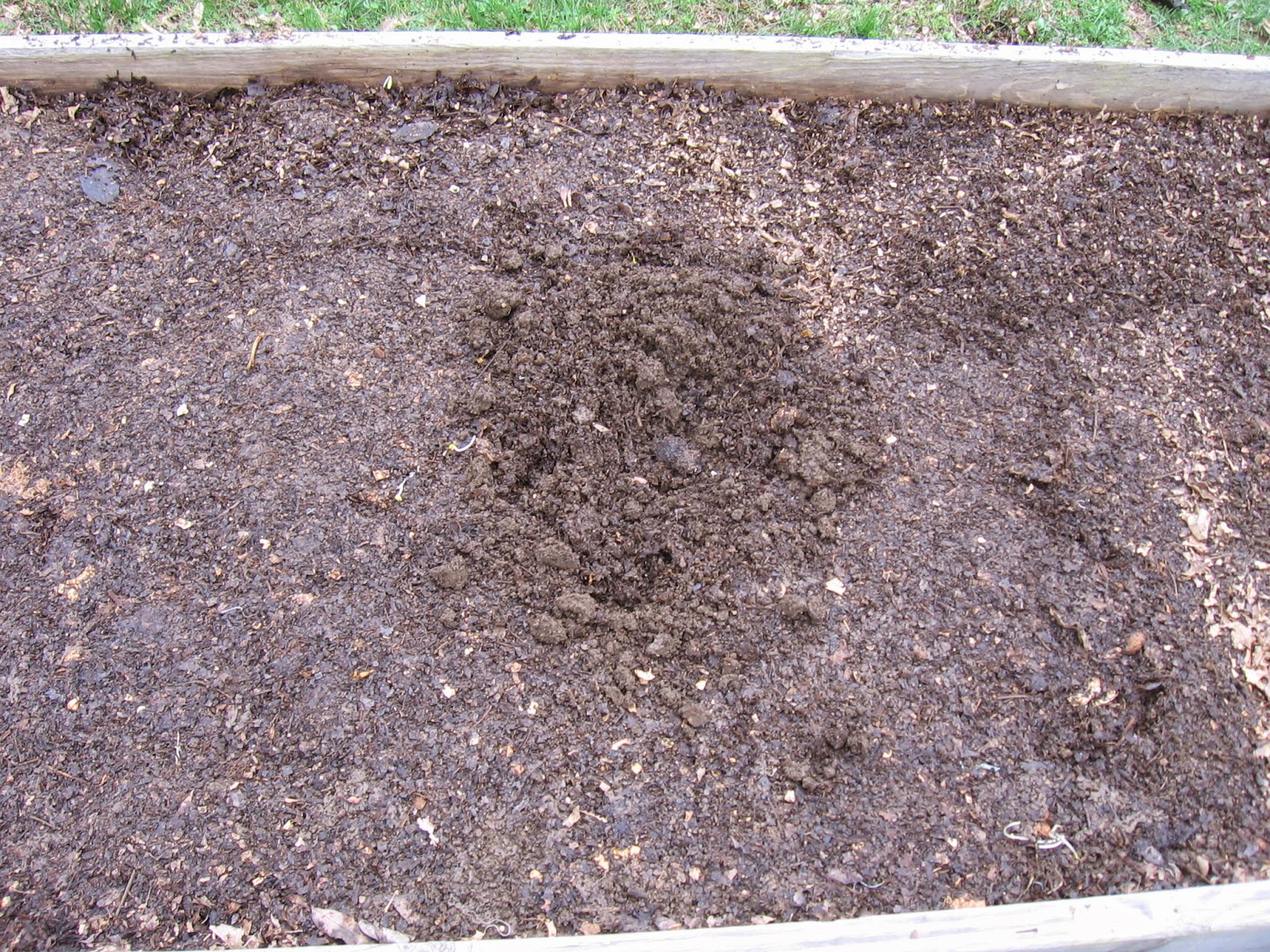 The shredded leaves were spread over the potato patch.  Last year I used shredded leaves as a potato mulch and found they work well, blocking light efficiently and leaving the ground in good condition. 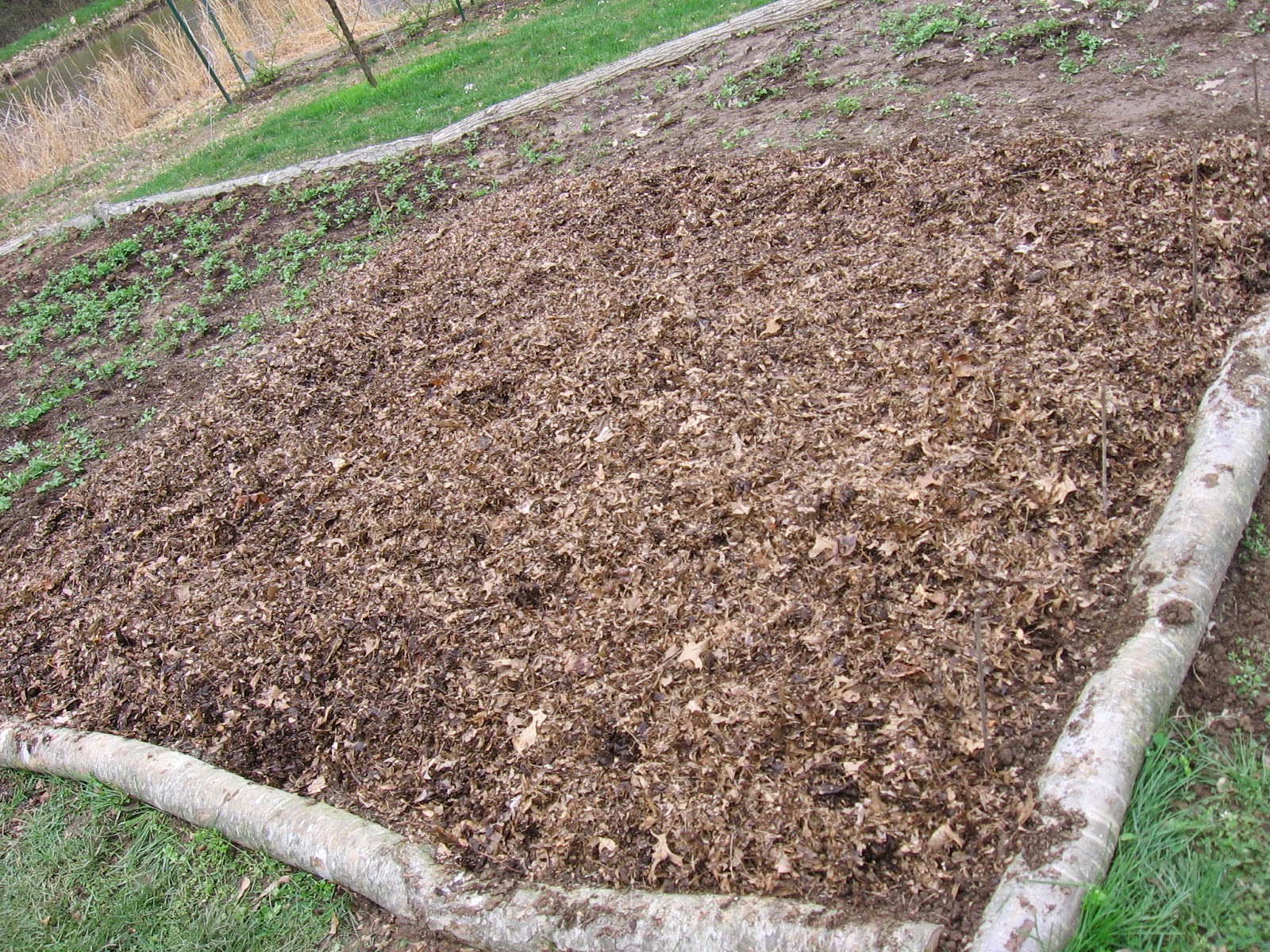 When I dig up the potatoes this summer, the leaves, which will be about half-decomposed, will be put into the compost bin.
Posted by gardenvariety-hoosier at 5:11 PM

I miss potatoes (I can't eat them). I used to struggle to get seed potatoes around here. Everyone else wanted to plant them way into May. I wanted to plant early ones in the middle of April.

My potatoes are going in this weekend (and maybe the onions too - I thought it was too early but you have yours in already). My squirrels have never been interested in potatoes. But I do have a vole problem and they gnaw away the potatoes underground (or at least I think that is what happens).

Your use of sulphur is interesting. I don't think we would be allowed to use it here. The UK is a bit of a "Nanny State" when it comes to garden chemicals!