The REAL first day of spring

For those of us that live in a temperate climate like the American Midwest there are probably a lot of different ways to claim that spring is here and winter is over.   There is the spring equinox, March 21, officially spring.  The way I know that spring is definitely here is by the tasks that are done, and by that yardstick yesterday, March 31 officially was the first day of spring.

I knew by the weather reports that an extended spell of nice weather, not just one or two days, was on the way.  On Monday the backyard and vegetable garden looked like this, with the plastic greenhouse still in place. 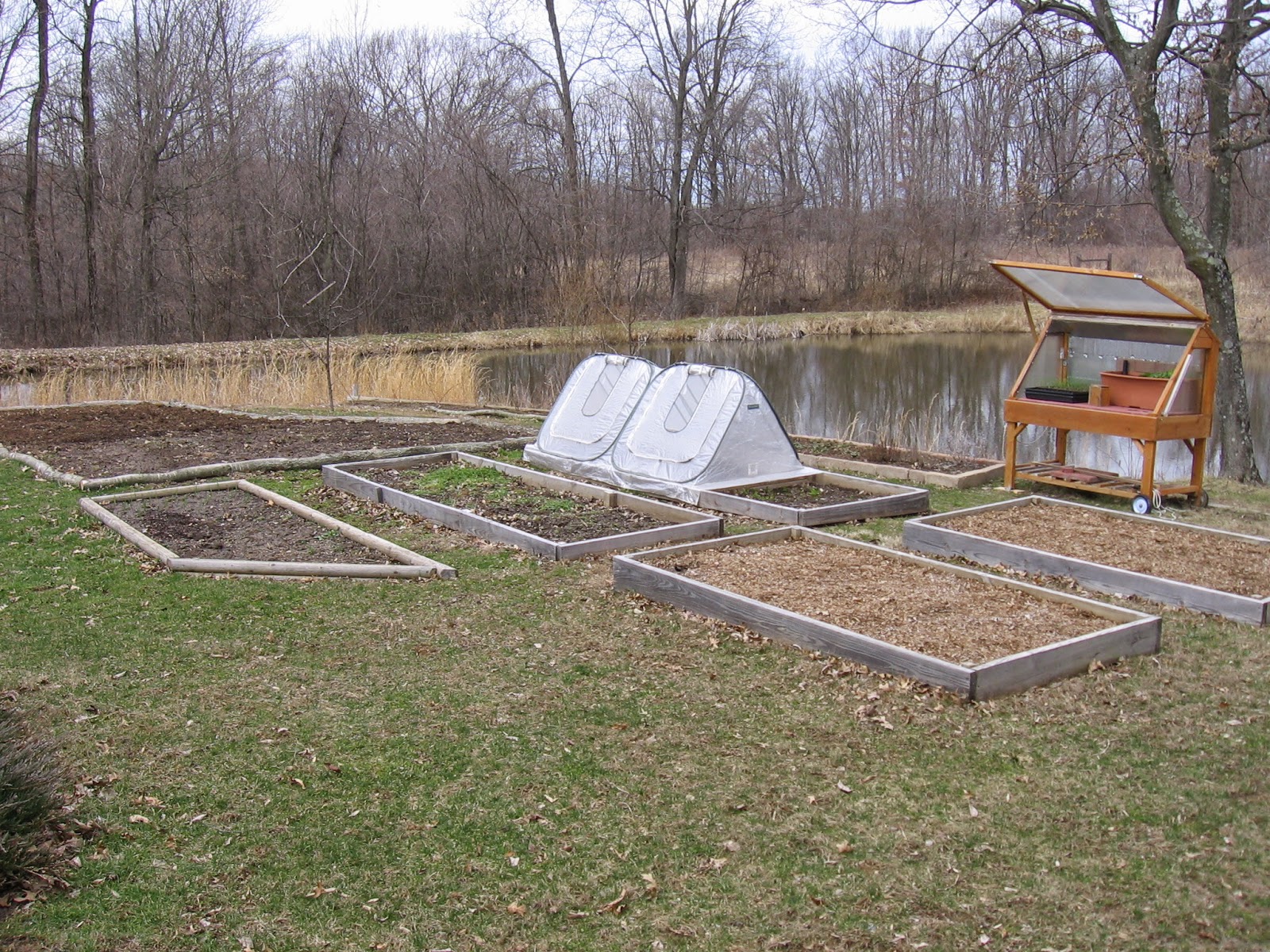 With better weather on the way the greenhouse had outlived it's usefulness.  It had protected dormant spinach over the winter and kept the soil a bit warmer than if it was exposed.  After the greenhouse was removed their was some parsnip to deal with.  With the late cold followed by rains, there were three rows left in the ground that had sprouted.  I assumed that once sprouted they were unfit to eat, so I dug them out and put them in the compost bin. 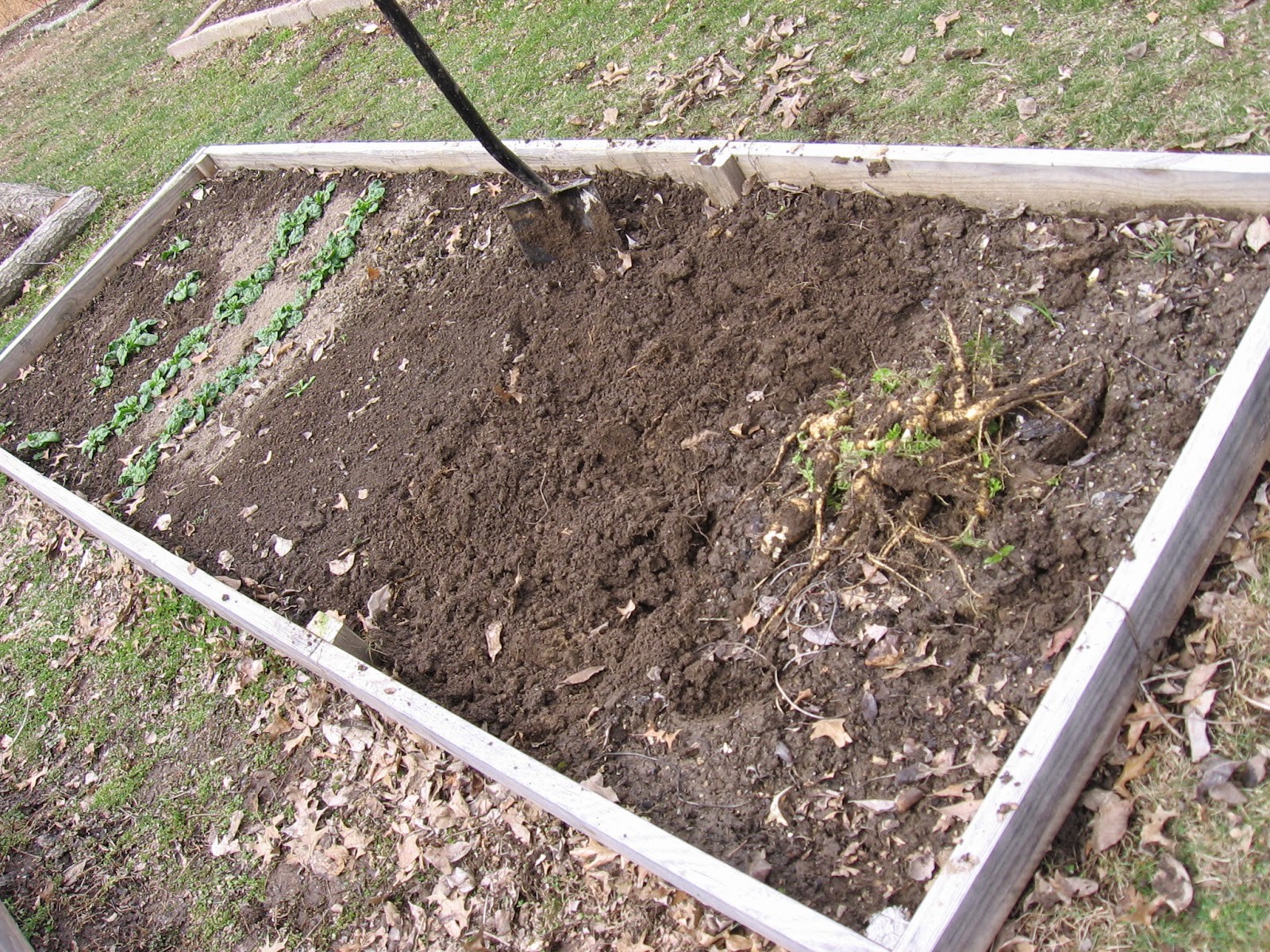 Now the spinach can get unimpeded sunlight.  I expect it to really grow with the sunny days.  The Viroflay spinach never germinated well, and Burpee's Double Choice spinach was seeded in the gaps about two weeks ago.  It is just now germinating. 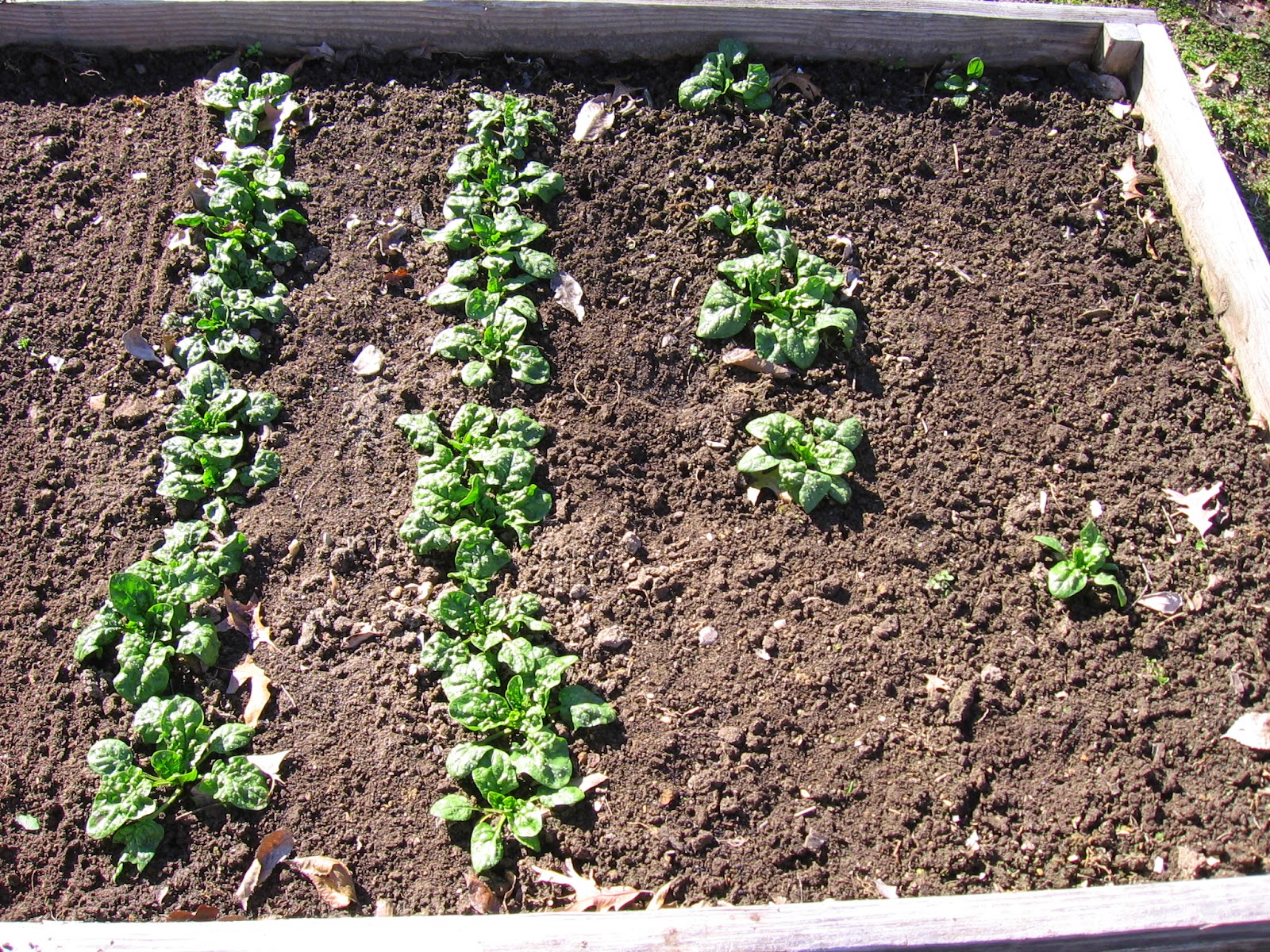 The open space in the bed was turned over with a shovel.  I added a few handfuls of 8-8-8 fertilizer and a few handfuls of blood meal, cut up the clods with the hoe and raked it smooth.  The first batch of cole crops under the lights was more than ready to go into the ground, but I waited.  One more frosty night and on Tuesday the weather warmed nicely.  It was time to set them out.

I have never tried to ease cole crops into the great outdoors by transitioning through a cold frame, they are pretty tough.  Going into direct sunlight can be a bit of a shock for them though, especially on a windy day like yesterday.  I waited until later in the day to transplant.  First I set the pots into the places they plants would go.  I just eyeball this.  Broccoli goes on the north side of the bed, as they get taller and need their space.  The wind was knocking them over pretty good. 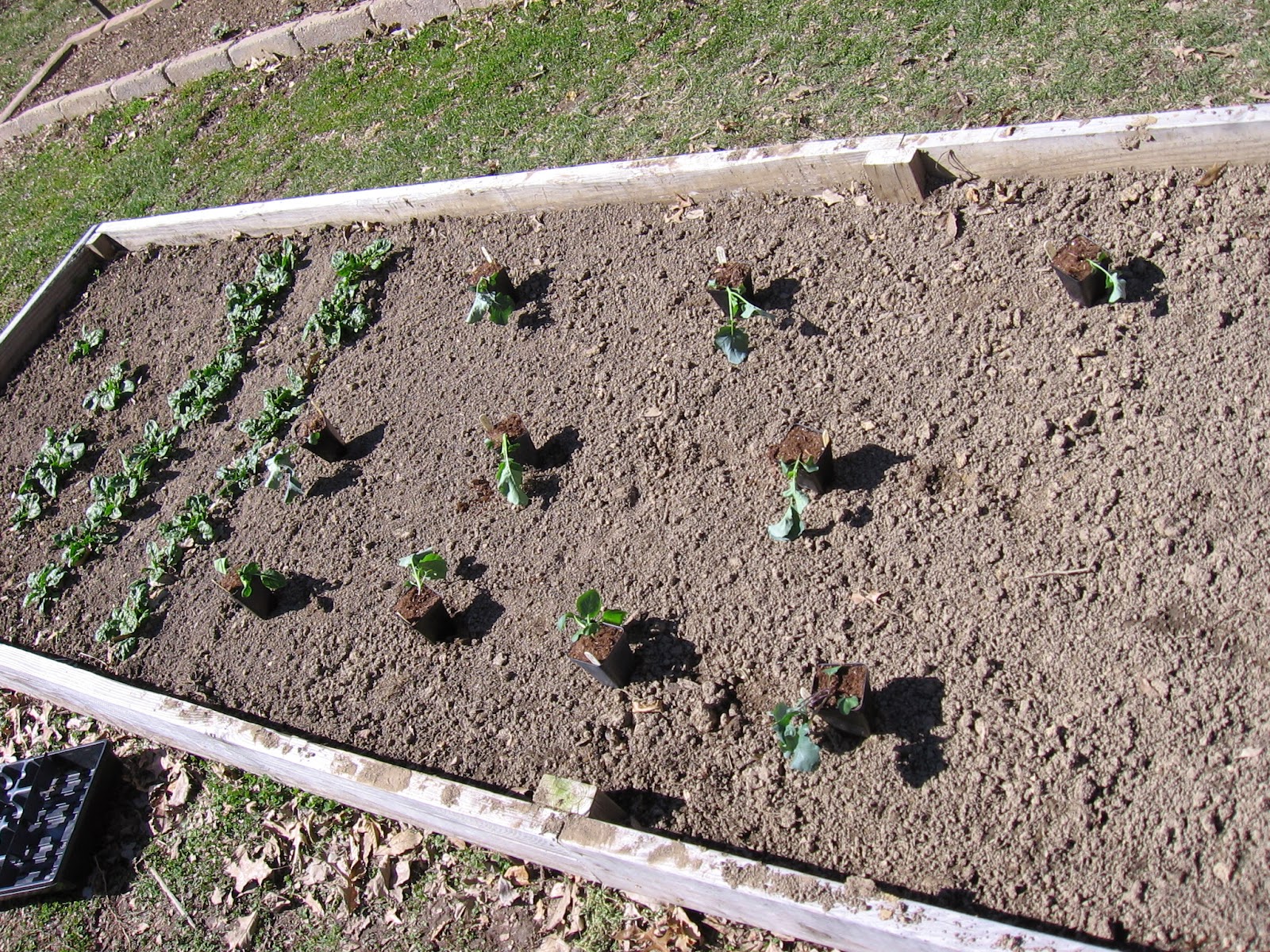 Then I just dug them in. There is Green Magic, Major, and Aspabroc broccoli, Gonzalez cabbage, Kolibri and Grand Duke kohlrabi, Snow Crown cauliflower and Tatsoi, ten plants in all. The final positions were changed a little.  I soaked them with the hose because the wind was going to draw water right out of them.  This morning they looked fine. 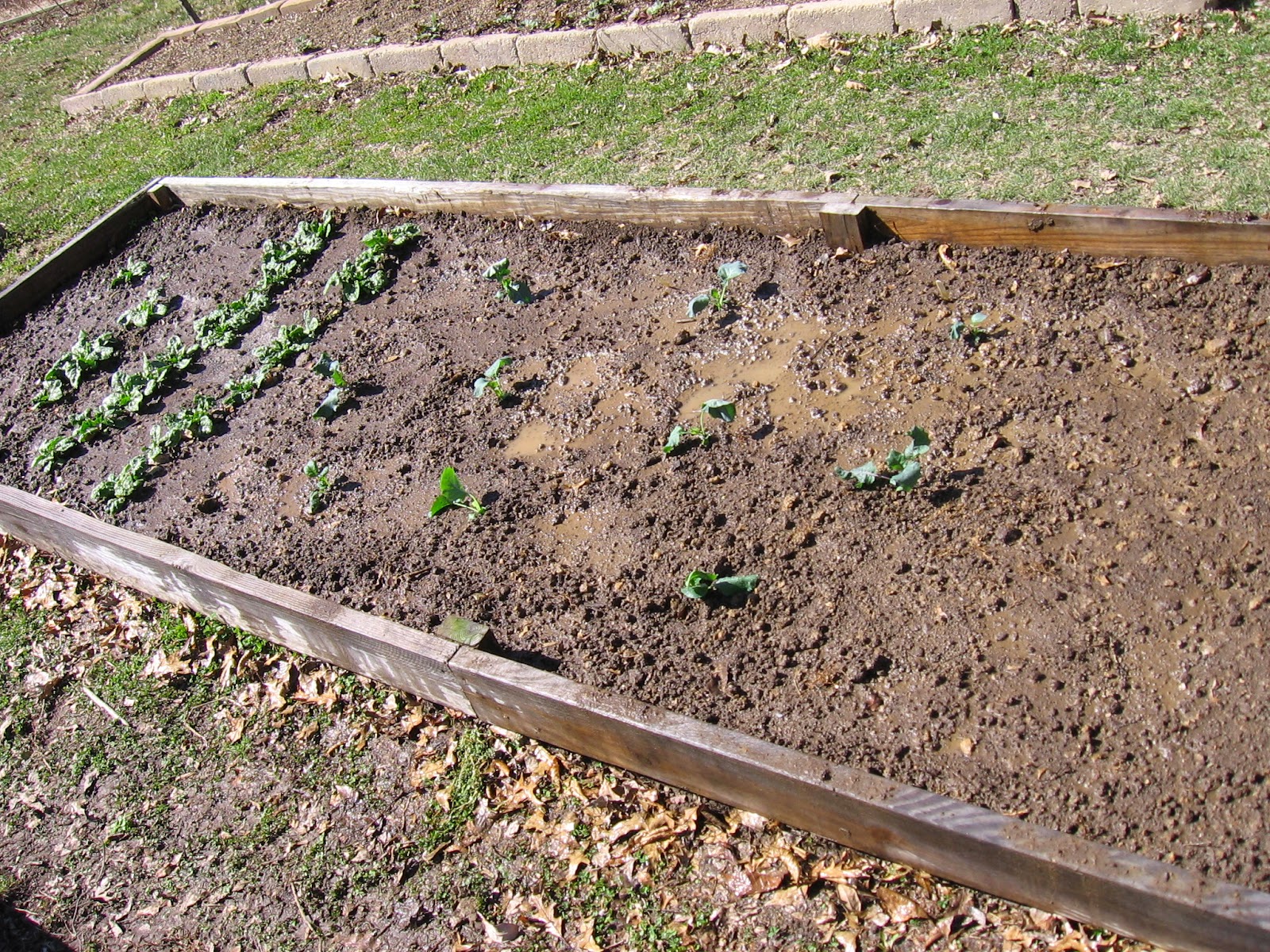 Just getting ten brassica seedlings into the ground should mark the turning point from winter to spring, but I wasn't done.  The hose reels were wheeled out and hooked up, the garden tool rack was wheeled out too, the season's wood ashes were hauled out to the pasture and spread out (won't need to burn any more fires in the stove), and leaves that had piled up on the flower beds were removed.  There was ajuga, day lillies and and even hosta buds underneath it all.  Now if that doesn't mark the beginning of spring nothing will.

The Ruby Ring onions have been growing well in the mobile greenhouse, as well as the lettuce in the Earthbox.  I started the first batch of lettuce indoors, then thought that the remaining lettuce could be seeded directly into the Earthbox.  It's been very slow coming up. 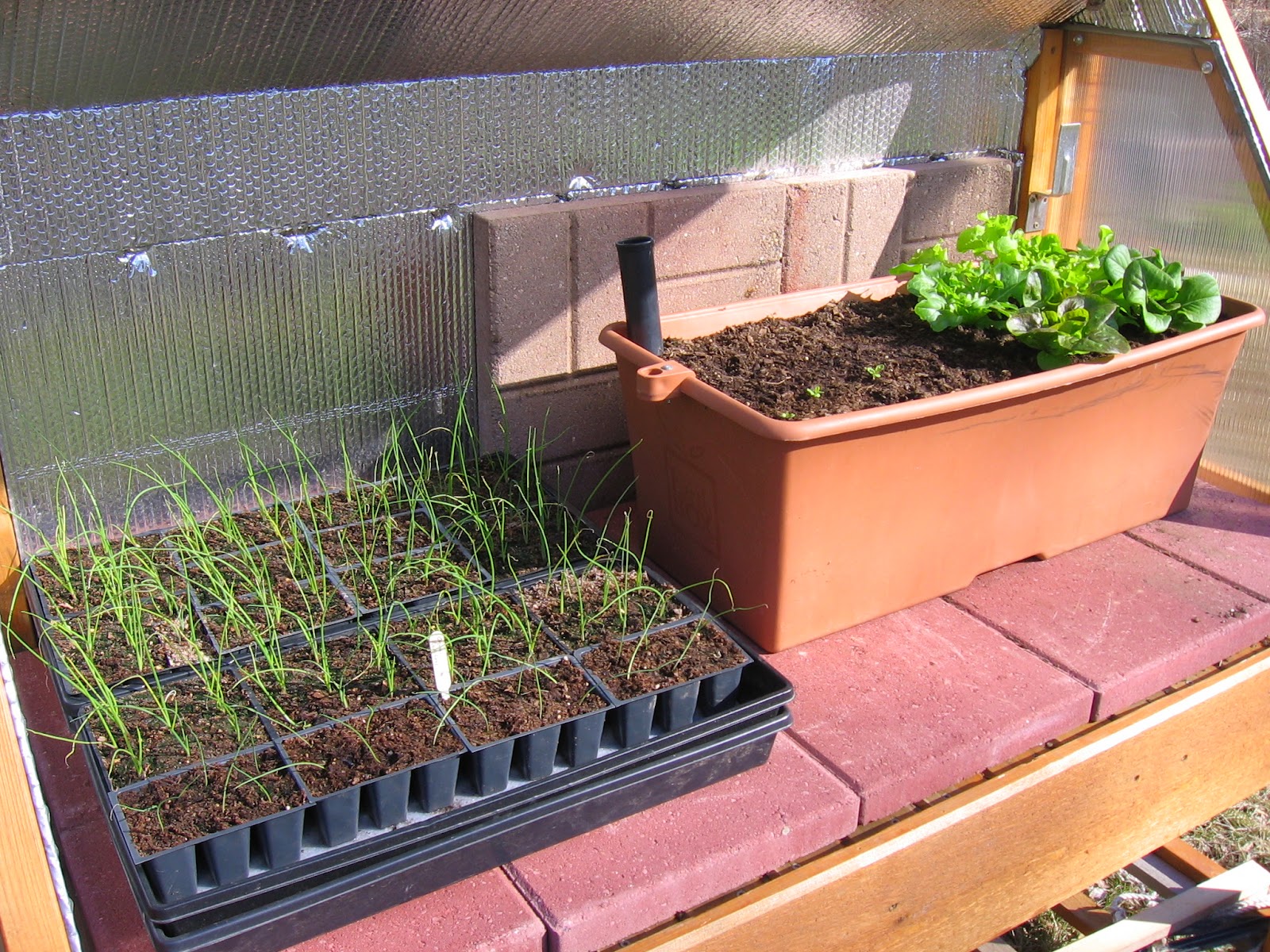 I found this yesterday on the deck, the remains of a crawfish.  Where did it come from?  Lately a red-tailed hawk has been hanging around the pond roosting in a tree.  Looks like the hawk has developed a taste for lobster dinners.  It also left a copious amount of white bird poop on the deck rails.  This bird is a very neat eater. 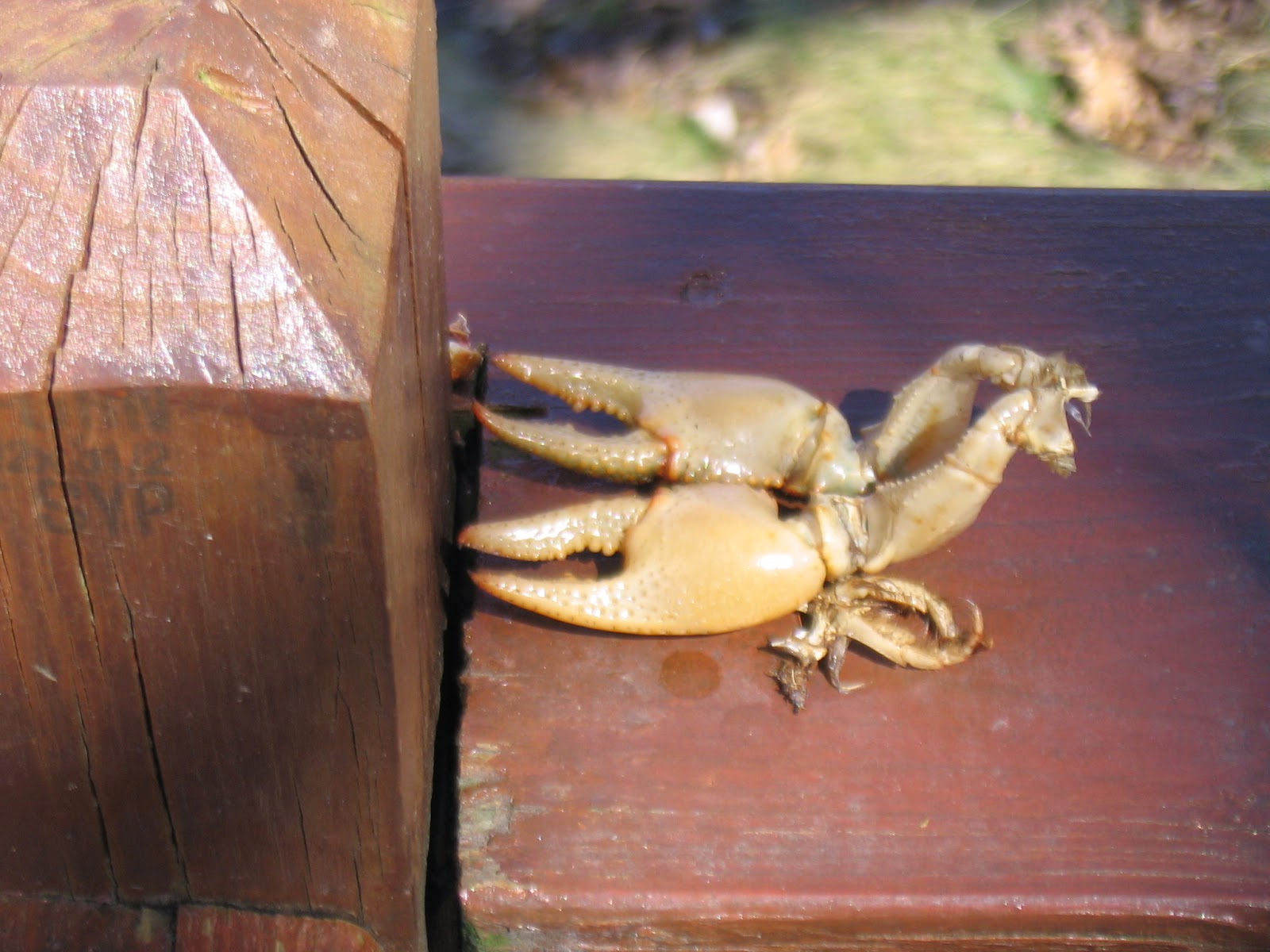 Posted by gardenvariety-hoosier at 3:41 PM

I declared yesterday to be the first day of spring too. But not because of planting anything. I always think spring has come when the crocuses bloom and that finally happened.

In our neck of the woods, spring is *almost* here. I was out today getting some plastic over my spinach/lettuce bed, in an effort to warm the soil so that I can get things started. One bed that I put plastic on a couple of days ago is already defrosted to a depth of 3" (vs. 1" for the uncovered beds). I'm out there every day with my stick, measuring the progress; sure does feel good when it sinks in just a bit deeper.

Well, you HAVE been busy! I reckon you may have been a bit harsh on the Parsnips though - they would probably have been OK for a bit longer, even if not in top condition. As long as they didn't have any flower-stalks yet... We have had several days of very strong wind here, which really dries out the soil, so it has been a relief to get some gentle rain today.

I still have piles of snow in the yard here in Eastern Ontario but I just saw "my" first signs of spring; the daffodils starting to peak out of the dirt!