Well finally I got the cucumber seedlings into the beds.  There was a spell of cool weather and I wanted to wait.  The temperature never went below 40 F, but it was cold enough to kill one of the okra plants and nearly kill another.  With the cucumbers in the last of the seedlings have been set into the beds, and the last trellises have been built.

It was a decent week of harvests.  They are really picking up now, nearly six pounds for the week.  There were two kohlrabi averaging 1 1/2 pounds, lettuce and the first broccoli. 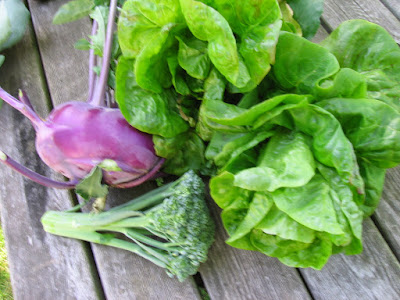 The broccoli is Aspabroc, an F1 variety known as broccolini in the grocery store.  It looks to me like a standard heading broccoli that was bred to make a small main head, which is shown above, and produce numerous side shoots at the same time.  It remains to be seen how long it will continue producing.  This is the plant after the main head was cut: 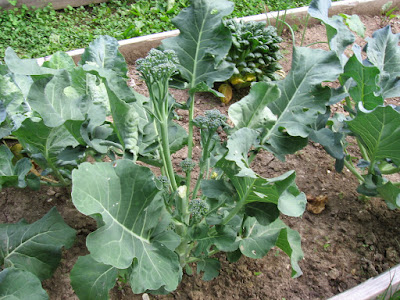 The shoots have very long stems which are edible.  One thing for sure, it's very very tasty.  I think of it as a snacking broccoli. 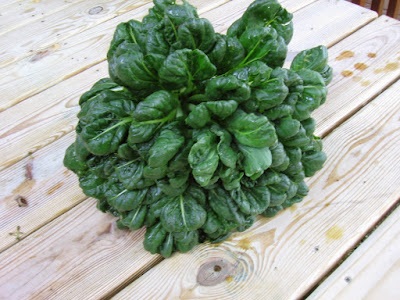 I also picked 6 ounces of strawberries, a real treat.

To get the squash bed ready for planting, the cover crop of field peas was cut with shears and set on drying racks.  The dried hay will be fed to the rabbits.  I will write a post about feeding the rabbits in a few days.  To see what other people are growing , go to http://daphnesdandelions.blogspot.com/ 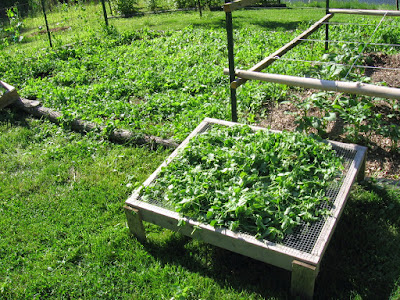 Posted by gardenvariety-hoosier at 4:37 PM

Wow 1 1/2 pounds for one tatsoi is huge. Mine usually are around half a pound.

That Asprabroc sounds like what is marketed here as "Tenderstem" broccoli - which nicely describes it. It is very tender and tasty, but also very pricey to buy, so it makes sense to grow it oneself.