Growing seedlings indoors is officially over for this season.  The cucumber starts were moved out to the mobile coldframe and the light unit was unplugged.  I'll dismantle the rack soon and store it. 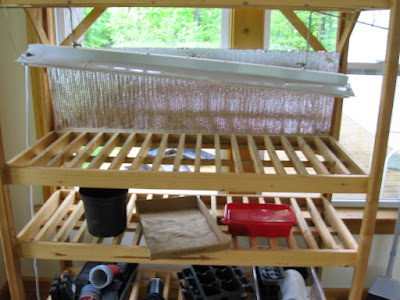 The coldframe has sweet potatoes and cucumbers, also a few 'extras' of tomatoes, peppers and okra just in case any in the beds don't make it.  I potted the sweet potato slips and don't want to set them out yet.  Next week the weather, which is nice right now, is predicted to turn cool for a few days and I'm leery of setting them into the beds.  They really don't like a shiver. 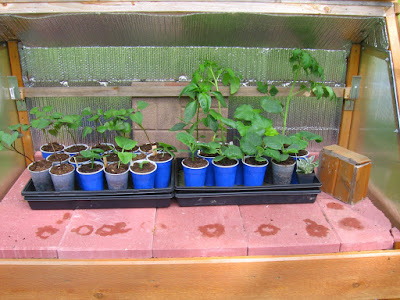 Eggplant doesn't like cool nights either.  It doesn't need to frost, anything near freezing and the eggplant will never be the same.  That didn't stop me from setting  out eggplant and okra into the beds today.  If it looks like the temperatures could drop too low I'll put some waterwalls around them.  The two solanacae beds are now planted.  This bed got a Bride eggplant just in front of the tomato cages.   The other bed was planted in much the same pattern, but with only three pepper plants and a row of Provider beans at one end. 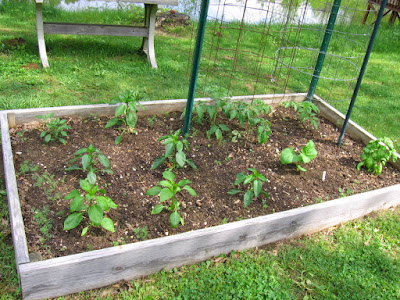 I put two Silver Queen okra in a small plot on the slope toward the pond.  Amended it with some compost first.  This variety gets huge, about 8 feet tall. 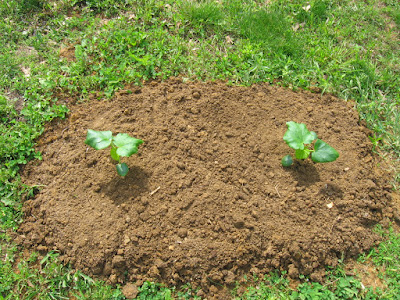 A few feet away is the Titania black currant that was planted a few weeks ago.  It is growing nicely.  I remember black currant jelly when I was a kid, it was one of my favorites.  It's supposed to be very healthy. 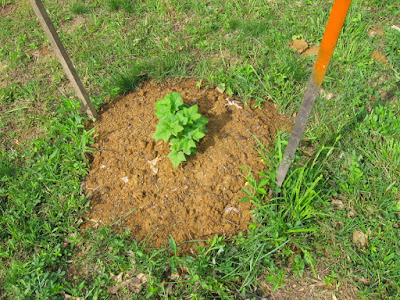 This bed originally held the overwintered spinach, now gone.  Starting in the foreground there is Tyee spinach, supposedly a heat tolerant variety, then Red Tropea onions, the first set of cole crops (from which I've removed two kohlrabis), a row of Red Cloud beets, two Millionaire okra plants, a smallish okra, a row of Double Choice spinach and a row of carrots.  It's a busy bed. 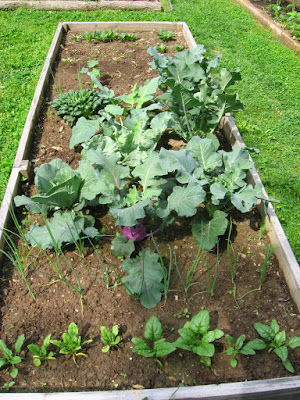 The perennial bed is looking good.  Asparagus is in it's second year and hasn't been harvested yet, that's for next year.  It's head high.  The Tribute strawberries are loaded with berries and the herbs look good. 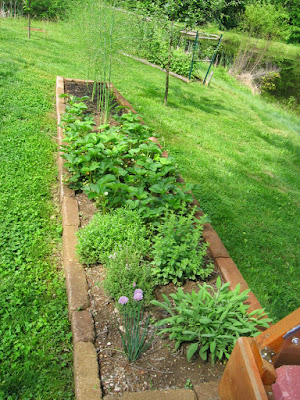 Most of the potatoes are up but there are a few stragglers.  I pulled back the leaf mulch in a few places to expose the growing tips to the sun.  There will always be one or two plants that never sprout. 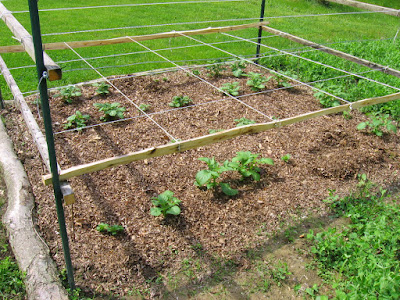 The pole beans have germinated and will be climbing soon.  This year I planted Fortex and Marengo Romano, a yellow bean. 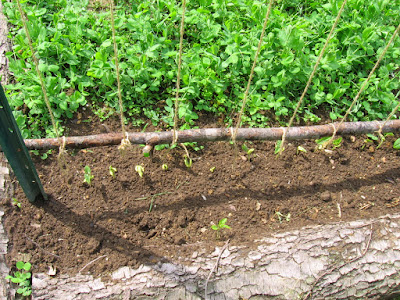 Nearly everything is in the beds except for the cucurbits and sweet potatoes.  I always enjoy this time of year, seeing the greenery return and thinking about all the good food that is in store. 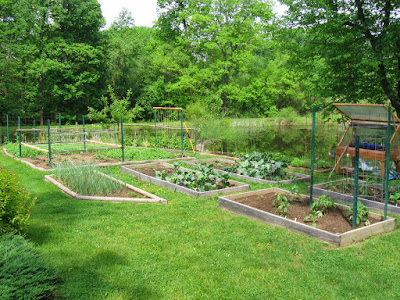 Posted by gardenvariety-hoosier at 5:30 PM

I love this time of year too. All that snow is just a memory and the weather is so nice and the beds are greening up.

I can't wait to get most of my seedlings in the ground as well. This year, a lot of them are looking a bit sorry - I'm sure that once they settle into their beds they will do much better.

Your veg-garden is looking great, Mike. The situation in my house / garden is very similar. We can see the windowsills again now! I have a couple of cucumber plants indoors still, plus the Sweet Potatoes, but everything else is outside or in one of the mini-greenhouses. It's a nice time of year - full of promise for the future!