The tomato and pepper seedlings have been set into the beds but there is still more work to be done.  Since it looks like there is no chance of a frost any more this season I went ahead and seeded the pole beans, a single six foot row, and set up a trellis.  The pole beans are going in at the south edge of the squash/potato/sweet potato bed, where the rake handle is in the foreground. 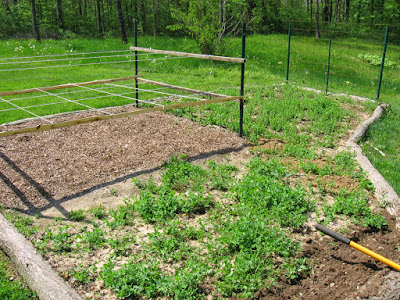 I plant to put sweet potatoes in the part of the bed in the foreground of the picture, between the pole beans and potatoes, and winter squash will go in the back.  For the sweet potatoes I'll turn the soil over and till the peas in before planting the slips.  For the squash I plan to just leave the field peas in place and spot dig just enough to get the seeds in.  Squash foliage should quickly overtop the cover crop of peas and shade them out, but I think the sweet potatoes will not handle the competition so well.   Potatoes are just now shooting up through the leaf mulch.

Some of the field peas were pulled up to make room for the row of beans.  All of them had a nice batch of root nodules on them.  I coated the seeds with inoculant before planting.  The nodules contain nitrogen fixing bacteria which can take free nitrogen from the atmosphere and convert it into a usable form for the plants.  This symbiotic process uses some of the plant's energy but is a net gain for the plant when nitrogen is in short supply, which is usually the case. 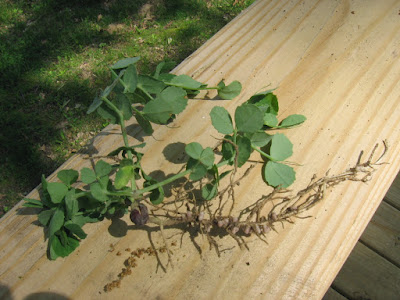 The first batch of cole crops is doing well,  I expect that kohlrabi will be ready for picking in about a week. 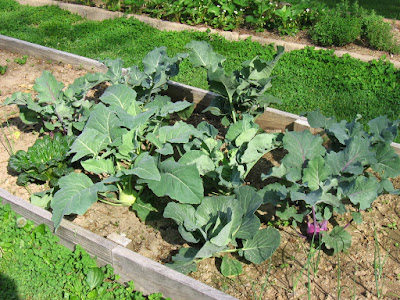 Next week the weather report predicts several cool days, with lows in the 40's F.  Once that is past I will transplant the okra, eggplant, sweet potato and cucumber seedlings into the beds.  Spring planting will be finished and I can move on to other projects.
Posted by gardenvariety-hoosier at 4:38 PM

The roots on that pea plant really are impressive. Are your Field Peas used solely for their nitrogen-adding qualities, or do they produce edible peas as well?

My kohlrabis haven't started to swell yet. But they are looking good, so I'm hoping it won't be too long.

Mark, the field peas are a cover crop but. . . when they are removed to make way for the sweet potatoes I will feed the plants to my rabbits. I expect the bunnies will eat the entire plant with gusto.