June.  The hotweather crops are developing but aren't ready.  The cool weather crops may have a tough go of it in the heat, with highs in upper 80's (30-32 C) every day.  This year I'm removing excess fruit that is set by the growing hot weather plants so they will put more of their energy into growth.

Last year the Calypso pickling cucumbers set out a flush of blossoms while the plants were quite small.  I got a lot of cucumbers early but the plants never did much after that.  This year I'm removing nearly all of the blossoms until the plants are well established.  I want the plants to produce a batch of cucumbers when they are large, that way I will get enough cucumbers to pickle.  There  are 4 Calypso vines and one Diva (a slicing cucumber) growing on the north side of the bed behind the cole crops.  The cole crops will mostly be gone in a few weeks. 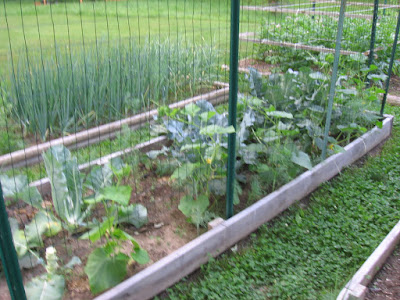 I've also been paring down the fruit set on the tomato plants and pepper plants.  It looks like the Jalapeno and Paprika plant will have a few peppers ready to pick by the end of the month. 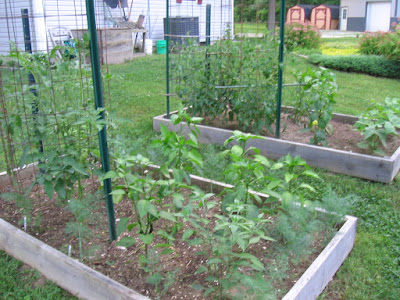 The potatoes, sweet potatoes and pole beans are doing well, although a few of the potato starts never came up.  The pole beans have reached the top of the trellis.  I never know what to do with them once they reach the top.  Guess I'll cut off the tops and feed them to the rabbits.  Sweet potatoes love the heat. 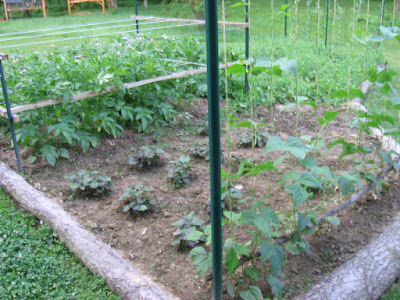 This year winter squash were planted into the cover crop of field peas.  For each squash plant a space about 16 inches across was dug up and seeded.  I expect the squash to overtake and shade out the field peas since they are so vigorous.  I hope the plan works.  The field peas took some time to establish but they are growing fast now.  Every day I pick a load of pea vines and give them to the rabbits, which love them as much as the leaves from cole crops, and the peas grow as fast as I can pick them. 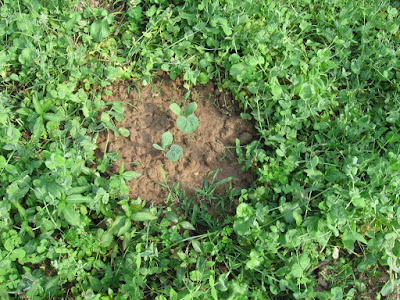 One bed is nearly empty, the 'greenhouse' bed that grew the overwintered spinach.  It won't be that way for long.  A summer squash and two okra plants are growing in the bed now, along with some dill and a row of beets. 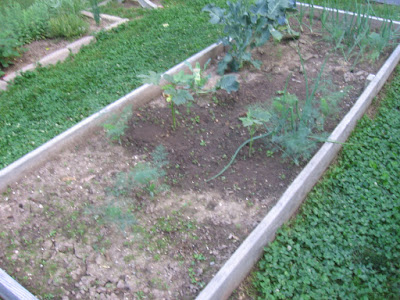 Posted by gardenvariety-hoosier at 2:03 PM

I've never even thought about picking flowers off of the cucumbers. Wilt is usually what takes my cukes down here. So the more I get the faster the better. As soon as wilt starts in the patch it spreads.

I like the idea of growing the squash in amongst he field peas. It should work well.

Everything looks so great ... I'm naturally a ways behind just due to climate. I love the idea of pinching off the flowers to encourage more growth at the same time later on - but I've only been growing cukes a few years now and I always worry that if I toss some flowers, I may not get anymore!!