Blossom end rot.  No surprise, it seems like it has rained nearly constantly for most of the week.  I don't have a rain guage but a bucket left outdoors indicated there has been 5 or 6 inches of rain.  Lots of rain, almost no sunshine, a good setup for BER.  Fortunately the Super San Marzano tomatoes were affected early in the season. 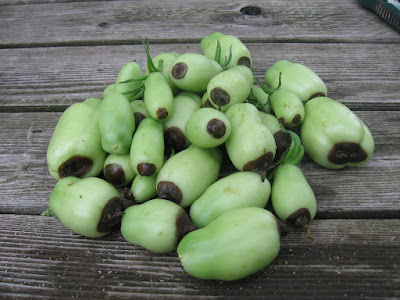 There was no point leaving them on the plants, where they would only take energy from the plant without giving me anything useful.  Since they are sauce tomatoes it's not so bad.  I want a large batch of sauce tomatoes all at once, and the flush of tomatoes will come a bit later.  In the picture you can see a few tomatoes that sized up before the sunless days, and they were not affected. 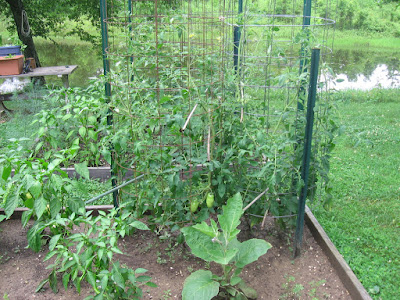 The Calypso cucumbers are doing well in spite of the weather.  There are one or two cukes on each plant that will size up quickly with some sunshine.  They will make the first refrigerator dills. 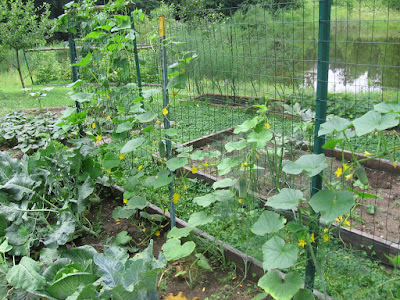 I probably should have pruned off some of the Alma paprika peppers while they were small.  That's a lot of peppers for a young pepper plant. 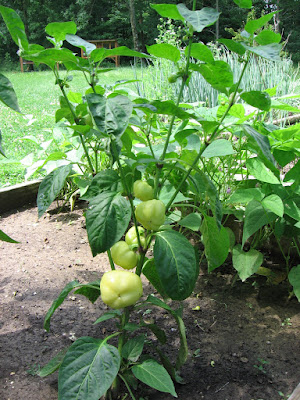 The Silver Queen okra is also doing well.  I put these plants into their own bed on the slope toward the pond, turned it over and added some compost.  They get so large, about 8 feet tall, that I don't have a place to put them in the raised beds. 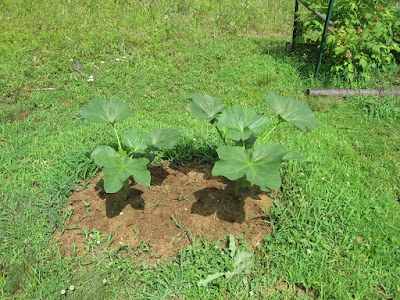 The Caroline and Autumn Bliss raspberries are now producing their early summer crop on last years canes.  When they are finished I will cut out the canes and remove them, making more room for this years canes to produce an autumn crop. 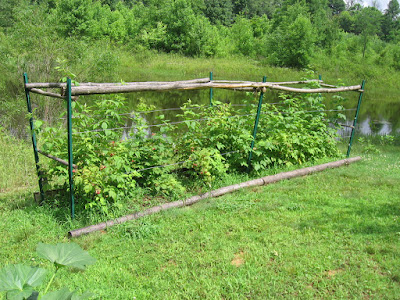 Posted by gardenvariety-hoosier at 5:07 PM

My cukes are still so tiny. But in a couple weeks I'm sure I'll be putting up the supports. Too bad about all the rain and the BER. I used to hate that. I knew I had plenty of calcium in the soil, but you can't change the weather.

BER is nasty and all the advice about preventing it was worthless. You are smart to just cut your losses and remove them. I have hoped I could salvage some part but the rot introduced from the BER scar usually ruins the entire tomato. Maybe you could make some green tomato relish with the good parts.

So sorry about the BER. That is a lot of rain all at once. Everything else looks good though. So many blossoms on your cucumbers.