That's my state of mind regarding tomatoes.  I say that because for years, tomatoes have been a bust.  It was shocking to look back at previous year's harvest totals.  I haven't harvested more than 40 pounds of tomatoes since 2011!  I remember that year - I grew exactly 2 tomato plants in 2 cages, a Brandywine and some sort of striped tomato.  Those were heirlooms and they still gave me decent yields.  Since that year I have grown more tomatoes, in more cages, and gotten less.  Every year the plants were overtaken by disease, and eventually the entire plant died.  Last year I harvested 12 pounds of tomatoes from 8 plants in 4 cages.

I did not keep records in 2010 and 2009, but remember a bountiful tomato harvest of Supersonic tomatoes.  Back when I lived in a small house in Indianapolis, I grew a few tomato plants and nothing else.  I rarely used pesticide, never any fungicide, and still got so many tomatoes I had to give them away.  What went wrong the past few years?  I've grown the tomatoes in different beds every year, removed excess foliage, grown them in cages, and still they have succumbed to diseases - blight, septoria leaf spot, bacterial wilt - not really sure the culprit except the plants die and don't produce much.

This year I made some changes to the methods, and I'm growing some blight-resistant varieties.  Unlike past years, there is no sign of any disease problems at this point.  The tomatoes (and peppers) are looking fantastic.  Even if they start showing signs of disease now, I think they would still produce a decent amount of tomatoes.   Some of the indeterminate tomatoes are nearing the tops of the cages, nearly 6 feet high. 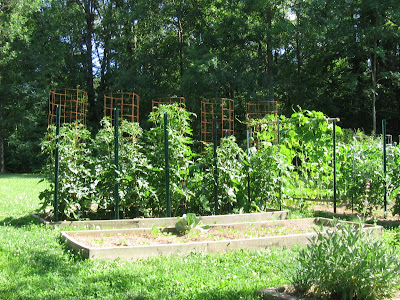 This picture shows the 5 cages of indeterminate tomatoes. There are 2 cages of Mountain Magic on the left, a blight resistant variety.  The center plant, which is nearly to the top of the cage, is Black Plum, a Russian heirloom.  To its right is Better Boy, and on its right is Pink Lady, both modern F1 hybrids.  The cages are made from 5 foot remesh,  suspended on posts to give the plants almost 6 feet of support.  They are 19 inches in diameter, with one plant per cage.

I think the taller narrower cages are an improvement, but can that account for the overall health and vigor of the plants?  Probably not.  Some of the plants are blight resistant, but some are not.  Before planting the tomatoes I amended the soil with compost made partly with rabbit poop.  It sure looks like they are getting a good diet of the necessary nutrients, and a healthy plant is better able to fend off disease.  All of these factors may help, but I think it's mainly something else. 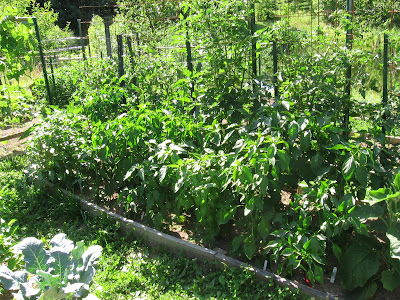 This is a Fish pepper, just a mass of foliage. 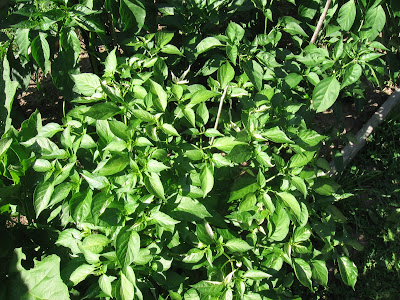 And a Jimmy Nardello, thick with peppers. 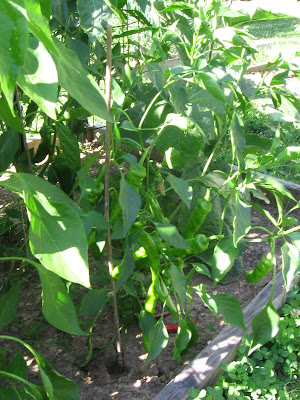 So why, at this point, are the tomatoes free from disease?  I think it's a combination of things.  Better cultural methods, and ample nutrients are part of it, but mostly I think it's the weather.  Since the extended rains in late May, the weather has been fantastic for people and plants.  There have been timely rains, to be sure, but when the rains are done the days are sunny, nearly cloudless, and not excessively hot.  Day upon day of sunny, moderate weather and fresh breezes, is a recipe for good growth and few disease problems.

I'm hoping that this year, finally, I get enough tomatoes to can a good bit of salsa and marinara.  Lord knows I'm due a decent harvest.  Then the question becomes:  how do I make sure of a decent harvest every year, even rainy, wet ones?

Posted by gardenvariety-hoosier at 9:39 PM

Your tomatoes and peppers are looking very healthy and the plants are nice and big. We're in the same boat as you, the last couple of years have been dismal for tomatoes. But hopefully this year will make up for it.

I have had a very similar experience - it's several years since I had a really good harvest of tomatoes. The biggest problem I have had has been the contaminated compost, but like you I think the weather has been the most important factor. This year we have had some decent weather in Spring and early Summer, so things are going well so far. My biggest fear is the blight, which (unfortunately) seems to strike every year these days. I'm thinking of trying some "Mountain Magic" next year, so I will be interested to see how yours perform.

I think the weather has a big part in how well my tomatoes grow. It's been several years since I had a really good year for them too. Like you, I have modified the ones I grow, trying to find those with more resistance to diseases. Last year I got quite a few but the rains made them bland tasting. I'm hoping both of us have a bumper crop of tasty tomatoes this year!