How do you know that the summer season is here?

Well the obvious answer is when it gets hot, but anymore that's not such a good guide.  Some might say that it's when the tomatoes go in the ground, but there's still some cool late spring weather likely.  This weekend I did a number of tasks which tell me that the summer season is definitely all in.

I set up the pump and watered the garden from the pond, a routine summer task.  Yes we had an inordinate amount of rain in late May, but it's amazing what a week of near-cloudless, sunny, dry weather will do.  Saturday morning the garden got a good soaking.  It takes about 10 minutes to set up the equipment and the same amount of time to dismantle it, so I usually try to water for at least 30 minutes and usually go for 40 minutes.  That's a  pass over the vegetable beds, then a pass over the flower beds, then another pass over the vegetable beds.

The extra pepper, eggplant and tomato seedlings (I always start an excess, just in case)  were dumped into the compost bin.  All the solanacae in the beds appear to be growing well, and there was no longer any need for backup plants.

The tomato plants were suckered.  At first I just wanted to remove the leaves that were touching the ground, open up some space at the bottom of the plants so air could move freely and make it more difficult for fungi to lurk in the damp.  Then I noticed that the plants really needed suckering.  I don't remove all suckers, the plant would just go vertical, but I remove many of them.  Any sucker that doesn't have a clear path to space and sunshine is gone, especially suckers that come up from the bottom.  Those suckers will get leggy and thin and not be strong enough to support any tomatoes.  Some suckers quickly develop into a solid main branch.  This one on the Black Plum plant is as large as the main stem, and since it's very solid, it will stay (the sucker is actually the branch on the right). 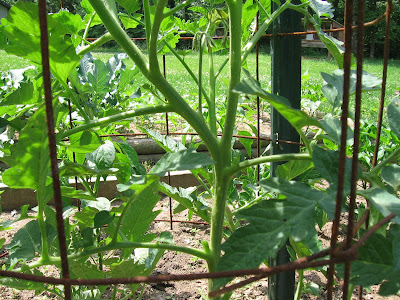 I removed the last of the flowers from the cucumber vines.  I don't want the cucumber plants to put their energy into cucumbers until they have developed ample mass to support them.  It looks like they have reached that point, so, in a few weeks - cucumbers.

Lastly, it was time to weed.  Probably the most odious task, and one I don't have much patience for, but it had to be done.  The purslane was about to cover the Solanacae bed, and after the watering the day before, it was easy enough to pull out.  Same with the parsnip patch.  It will take another weeding, but soon the plants will throw enough shade to at least slow the weeds down.  I drew the line with the cole crops.  They'll be out soon enough and the beds can be hoed over.

On a related note, the potatoes in burlap bags experiment moves forward.  The plants were tall enough that I could stuff straw into the bags and roll up the sides about a foot.   If all goes according to plan, the plants will produce more potatoes in the straw. 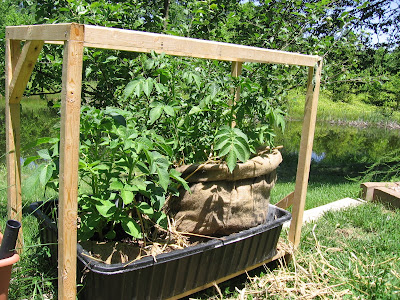 Posted by gardenvariety-hoosier at 6:47 PM

It sounds like your cucumbers and potatoes are doing great. That's so interesting that you sucker your caged tomato plants, but it makes sense with the fungal problems lying in wait.

Looking good! I'm still not convinced that summer is here as we have once again had a cool, wet spell. I had to resow the cucumbers as all of mine bit the bucket and it's taking them forever to germinate in the coolish soil. I have a feeling it will be quite a wait for our first cukes this year.