The food of the week is cole crops, because they constitute all of the harvest.  I picked two small heads of broccoli, most likely Green Magic, totaling 12 ounces.  The broccoli are not so nice this year.  First something ate small circular holes in the leaves, then they got hit with cabbage worms, which shred the leaves.  A spraying of Bt ended the cabbage worm infestation, but the damage was done and the heads are smallish.   The other thing not shown is a Grand Duke kohlrabi, just over a pound, which I sliced up and dipped into ranch dressing for snacks.

Cabbage is looking better than the broccoli, although the heads are not huge.  The cabbage on the left is Point One, a caraflex cabbage, a first for me, and on the right is Golden Acre, an old variety.   They added up to just over 2 pounds of cabbage.  The Point One makes a very dense head, which tends to keep the cabbage worms out.  It also has a nice flavor.  I'll be growing it again. 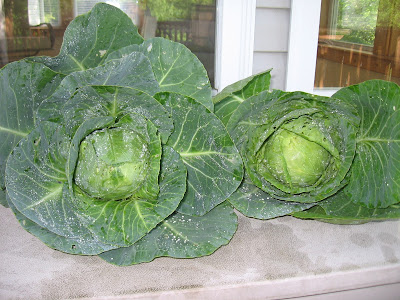 Both heads went into my first attempt at making kraut.  I think I see some bubbles forming. . . 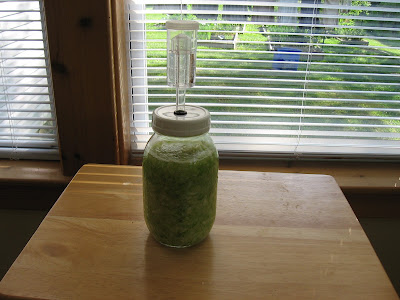 Also the first cauliflower, Snow Crown, weighing half a pound. 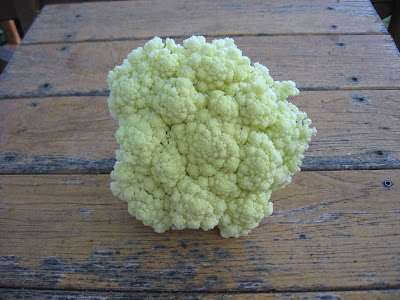 To see what other gardeners are getting this time of year, head on over to Our Happy Acres and check it out.
Posted by gardenvariety-hoosier at 7:44 PM

Cabbage caterpillars are terrible they're one of the reasons I stopped growing broccoli, well that and harlequin bugs. We still get caterpillars on the kohlrabi but it's much easier to squish them there.

Your cabbages look amazing, and that's so fun that you're making sauerkraut. Out of curiosity, have you ever tried eating the leaves on kohlrabi or broccoli?

Phuong - I feed the leaves to my rabbits.

Good to know about the Point One cabbage. I haven't grown a pointed one I really like yet, so I'll have to give it a try. That's a nice looking cauliflower too, something I never have much luck with.

I hope your kraut turns out well. Mine only bubbles for a couple of days then stops. It also slowly starts to change color, becoming less green with time. I have a couple of heads almost ready to cut and I'll be making kraut with them for sure.