More cole crops this week, and some hot weather crops are almost ready.   I picked 3 heads of broccoli that added up to 2 pounds.  The smallest head is Green Magic broccoli, a very early variety. 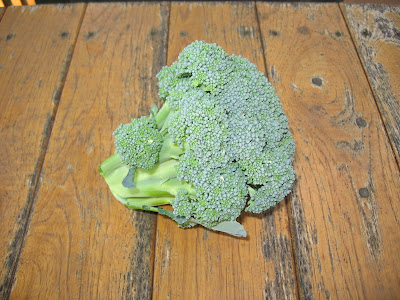 The Green Magic heads are smaller than in years past.  It's been a very good early variety and I'll continue to grow it.  The other 2 heads are from a new variety for me, Imperial.  It's about 10 days later than Green Magic. 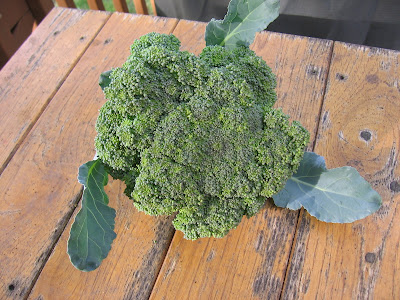 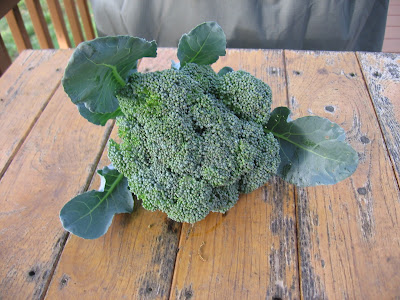 This is Minuteman cauliflower, another first.  The survival rate of these plants was not very good.  I set out a Minuteman and a Snow Crown in each set of cole crops, hoping to make a side by side comparison,  but this is the first Minuteman to make it.  It's a little later than Snow Crown, and makes a nice head, at almost a pound. 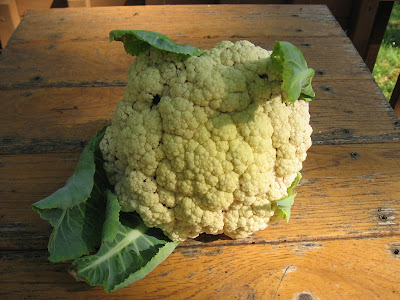 I also picked a 19 oz kohlrabi, not shown.

Some Vertina pickling cucumbers are almost ready to pick.  The first ones will be turned into refrigerator pickles, as I want pickles ASAP.  Later I'll try fermenting some.  They are smaller than Calypso and should fit nicely into pint canning jars. 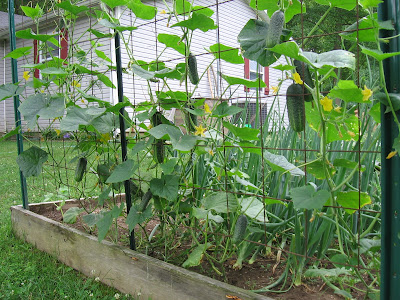 And the summer squash will begin producing very soon. The first ones will probably not mature since there were no male flowers on the plant when they were set.  For weeks this plant was very small, looking like it wouldn't amount to anything.  Then in what seemed the space of a week, it's growth exploded.  Suddenly it's covering over half of a 4 x 8 foot bed.   Good thing the garlic is coming out soon. 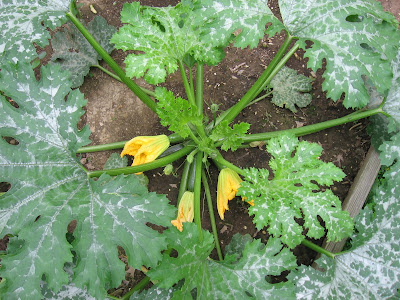 The winter squash have been problematic this year.  This is the second buttercup squash to rot at the base of the stem. 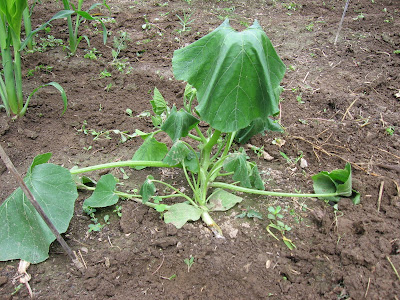 For the most part the garden is doing great so far this year, especially tomatoes and peppers.  To see what other gardeners are harvesting, head on over to Our Happy Acres.
Posted by gardenvariety-hoosier at 4:27 PM

I have never grown broccoli or cauliflower. Yours look so good I may have to give them a try
Happy Gardening!

Some nice looking broccoli! Mine haven't even formed heads yet. I just looked up Minuteman cauliflower. It seems nice and early, but if I try cauliflower again I think I'd go for a self-blanching variety, as that always seems to be my problem. Your winter squash looks like it might have a vine borer.

I've lost several winter squash plants too, though mine were smaller. I was wondering if wind played a factor, but I don't know for sure. The Imperial broccoli usually does well for me here. I plan on growing it for fall.

Nice tight heads of broccoli and look at all your little dangling cucumbers and baby zucchini. Love it. I really need to start some broccoli pretty soon for the fall.