I guess I'm one of those people who has to have a project or two to do every year, and on this house, there is no shortage of projects that badly need to be undertaken.  This year it's the front porch and walkway to the drive.  The walkway was a wood affair.  Not only was it dangerously slick in the winter, so slick that I've had a number of close calls, but the wood frame in contact with the ground was rotting away.  I'm sure the builder saved a little money by using wood instead of concrete.

Then there's the porch deck itself.  I shouldn't get started on the litany of transgressions against good, or even barely acceptable, workmanship, but here goes.  And I realize, it may not have been the builder who did this, because many builders subcontract their decks.   First off, the deckbuilder, I'll just call him Hack, put on the back posts next to the house by setting them on the floorboards, then toenailing them to the house through the siding.  Then they stained the deck with a sprayer without bothering to shield the siding. 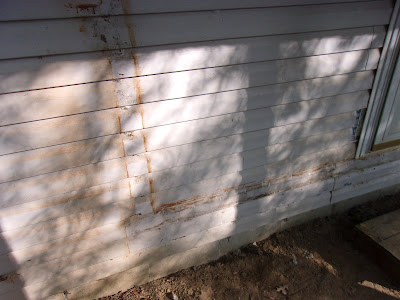 I should be used to this because they did the same thing on the back deck, which I replaced a few years ago, but it still amazes me:  Hack couldn't bother to remove the siding where the 2x8 ledger board goes on the house, he put it on top of the siding, so more nails through the siding.  But that wasn't even Hack's greatest feat of hack carpentry:  Instead of using lag screws or bolts, he used 16 penny nails to fasten the ledger board to the house.  Let's see, that nail has to go through a 1 1/2 inch thick ledger board, 1/2 inch of siding, 1/2 inch of foam, and 1/2 inch of plywood to reach the sill joist inside the house.  It never did, and the ledger board was literally falling off the house. 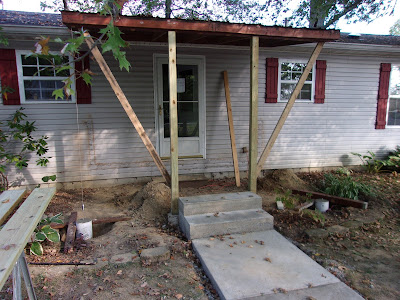 Digging out a post set in concrete is a lot of work.  With the posts buried 30 inches in concrete, you have to dig a cone to get it out of there, which is a lot of dirt to remove.  After putting in a 10 inch thick concrete pad at the bottom, the cardboard tubes are set into the wet concrete, leveled and filled, and an anchor bolt is set into the wet concrete.  The tubes let you bring concrete to a few inches above ground level without having to fill the entire hole.  That's a makeshift plumb bob dangling over the anchor bolt at the top of the pier.  The beauty of this system is that it keeps the wood post from touching soil or concrete.  A metal bracket is attached to the anchor bolt and the post attaches to the bracket, which holds the post an inch away from the concrete. 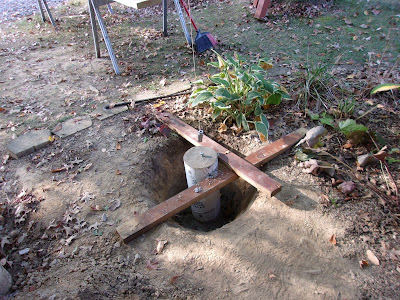 Looks like I"ll be replacing some plants next year.

Later the same day the piles of dirt were pulled back into the holes and the area raked out and  smoothed.  The damaged siding was removed and the joints on the foam were taped. 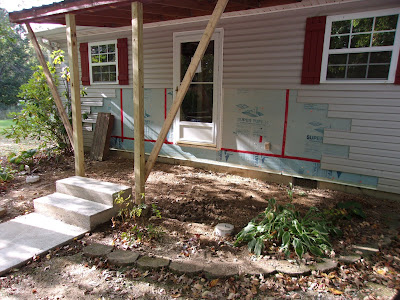 The worst of the work - the digging, post removal, and concrete work is over.  I'll give the new concrete piers a few more days to set up and put in the new posts.  It's great to be retired and in no hurry, because the only urgency is to get this finished before foul weather arrives, and being in no hurry means the job is done right and will last a long time.
Posted by gardenvariety-hoosier at 10:22 AM

Oh, I'm with you on bad workmanship. We have had several instances in our current house where we can't believe that someone would do such sloppy work.

At some point in human history, it seems that the motto changed from getting it done right to getting it done quickly and cheaply. Hopefully, as more people are frustrated with such shoddy workmanship, the pendulum will start to swing back.