Back when I was a wee lad at St. Paul's Lutheran school in downtown Fort Wayne, Indiana, Labor Day marked the end of summer, a weekend to go to the lake for one last swim, and, with summer's end, the start of school shortly after, the end of freedom.  Most schools did not have air-conditioning then, and it made perfect sense to wait until cooler weather was at least a short time away.  Now school starts in mid-August.  Guess I really am getting old.

The garden is definitely winding down.  Okra is nearly finished, summer squash may or may not be done, and the beans have slowed down, which is fine because I don't need to freeze any more. Some tomato plants have been removed and the ones that are left aren't doing that much.  Right now I'm making what is probably the last batch of marinara, and this will be a short batch at that, as there's not enough tomatoes to fill the 7 pints the canner will hold.

So here's what I got for the week.  First, a mix of beans, about a pound, nothing like the 3 or 4 pound pickings that I was getting earlier.  The Musica beans have slowed down, while the Fortex beans have picked up the slack.  There's one last patch of Provider bush beans almost ready that will help finish out the year and keep me in beans. 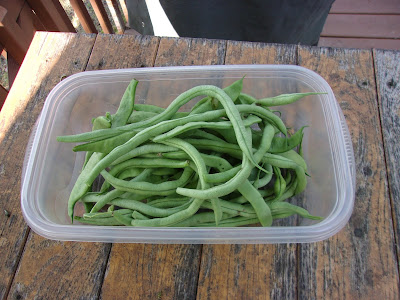 Tomatoes, a mix of Mountain Magic, Black Plum, Better Boys that were picked before the plant was removed, and a few Plum Regal sauce tomatoes. 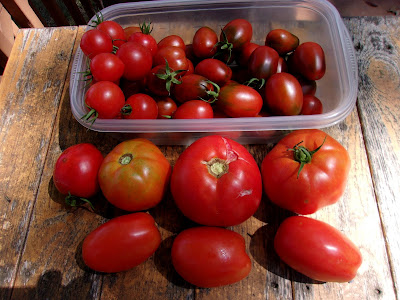 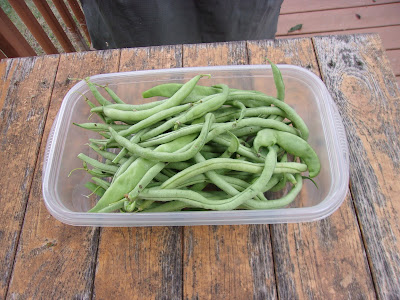 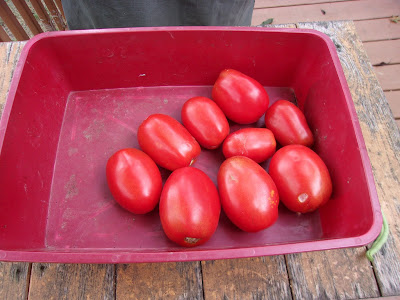 And this morning, more Plum Regals.  Combined with the earlier pickings, enough to make some marinara, which is boiling down right now. 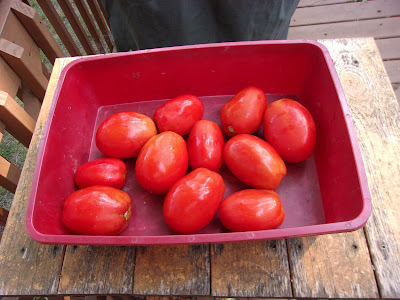 No peppers this week, but they are certainly not finished.  I'll pick some anchos and Giallo peppers later today and roast them for harissa.  To see what other people are growing, head on over to Our Happy Acres.
Posted by gardenvariety-hoosier at 12:43 PM

I'm about like you with the beans, our freezer is full and the pole beans have slowed to a trickle. And like you did, I need to cook another batch of tomato sauce, probably tomorrow. Too bad you didn't get rain from Harvey though.

I'm the opposite of you two, I've been dying for beans all summer but each time the plants mature we get weeks of 100+ and they drop all their blossoms and many die back. I've gotten some dry beans, but it'll likely be only 4x more than I planted. A pound of beans may not be much compared to your previous hauls, but I'm still envious! :)

Beans and tomatoes! Both wonderfully delicious veggies!
Have a great week!

It's great your beans produced for so long. Our bush beans always seem to get hit by rust, which definitely affects the quality of the beans. The harissa sauce you made looks delicious.