Production is slowing way down here, which is not a bad thing really, as I don't need to freeze any more beans or can any more salsa, there's plenty in the pantry.  I'm getting just enough to put into meals.  Having said that, the peppers are still producing and, if the weather is favorable, continue to produce for several more weeks.  This picking a week ago went into a batch of harissa, described in the previous post. 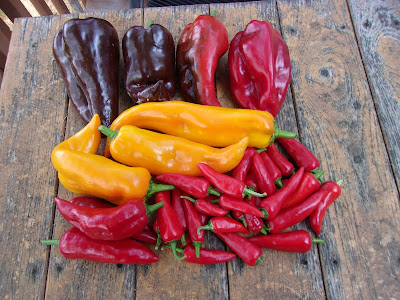 This is about a pound of pole beans, Fortex and Musica.  Later in the week I got 2 more small pickings of beans. 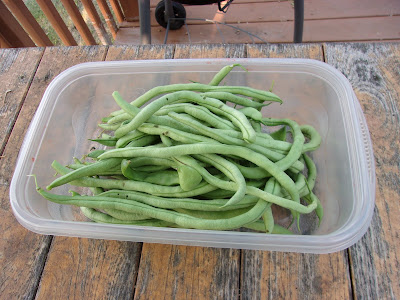 Sunday I removed the pole beans to the compost bin.  They were full of rust, some sort of bug was eating on the pods and pitting them, and they just looked bad overall.  It was about 9 feet of trellis. 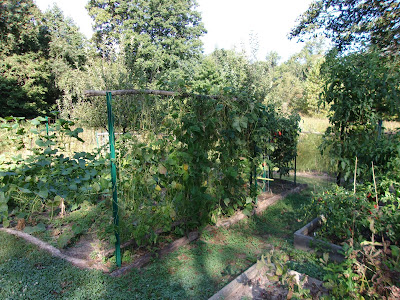 It only took a few minutes to remove them.  I cut the strings at the top and bottom, snipped the beans at the base and pulled the whole affair away.  It made a big pile of greens that were chopped up with the machete.  Since the string is jute it will decompose with the plants.

I've been getting mostly Mountain Magic tomatoes now, although the Pink Girl plant looks like it's going to make some more slicers.  Shade is a real factor now, as the tree line to the southwest comes into play and shortens the plant's day length.  This picking includes the last summer squash.  I pulled the plant out after harvesting it.  And there's one Jimmy Nardello pepper in there, which has started producing again. 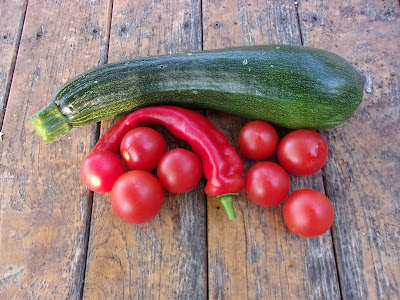 It looks like the Plum Regal plants may give me another batch of tomatoes.  I don't think it will be large enough to make a batch of salsa or marinara, but maybe enough to can diced tomatoes, which don't have to be boiled down.  I'm not sure I want to do any more canning, though. 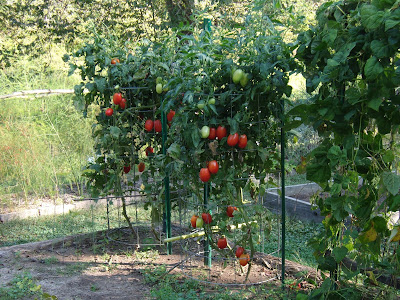 So far this year I've harvested 250 pounds of vegetables.  I don't know if the final harvest will be any more than other years, but it's been a balanced harvest where nothing has totally failed and no vegetable has given me a glut.  I've picked 100 pounds of tomatoes so far, better than in past years, but that is what I would expect from 8 cages.  Beans are a bit better than average, at 33 pounds, cucumbers were average at 22 pounds.  Eggplant and cole crops all gave decent yields, while okra and summer squash were a bit less than usual.  The only vegetable that disappointed was lettuce, and that was due to the potting mix that was used.  After a rocky start, it looks like winter squash will be OK. All in all, a very good year.

To see what other people are growing, head on over to Our Happy Acres and check it out.
Posted by gardenvariety-hoosier at 9:47 AM

That's a nice colorful array of peppers. I'm very fortunate with the way my garden is situated, it gets full sun from mid morning until the sunset. My previous gardens had shade from neighboring trees which always cut the gardening season short in most of the garden. That was always very frustrating considering I can garden year round here if there's enough sun.

I can tell you're having a good year. Your Plum Regal plants look a lot better than mine does. Since it's supposed to be blight-resistant, I really don't know what has done in the foliage.

That is a good haul of tomatoes from 8 cages! My average per cage is nowhere near that much. It sounds like a good yield on beans too.

That is a beautiful haul of peppers. Congrats on having the "perfect" year :)

I'm clearing out beds, slowly but surely. At the end of the summer, when plants are looking ratty and diseased, I do enjoy ripping them out and getting back to bare soil. That is especially the case in particularly bad years such as this one.