About a year ago I wrote a post about a patch of small pawpaw trees I found growing at the edge of the yard.  To help them along, I removed other saplings, wild raspberry vines, and invasive multiflora rose bushes that were competing with them.  Well this year they have rewarded me with a nice crop of pawpaw fruits. I've been picking one or two a day and having them for desert. 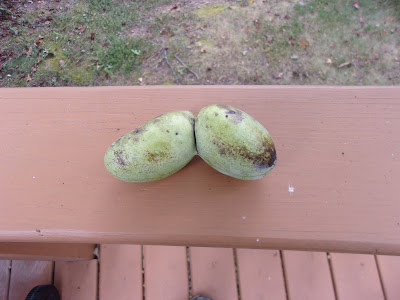 For those of you who have never tried a pawpaw, it's a nondescript looking fruit on the outside that has a custard-like yellow interior that tastes better than anything I've ever tried.  Here's a picture of a small, bruised specimen.  The seeds are like large watermelon seeds, designed to pass through an animal to be dispersed elsewhere. 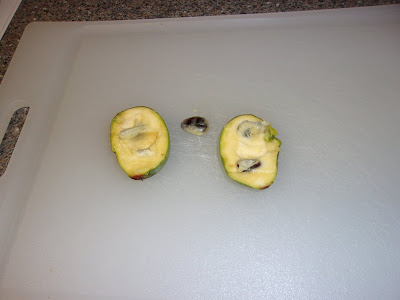 An article in Serious Eats describes the flavor better than I can:  "A pawpaw's flavor is sunny, electric, and downright tropical: a riot of mango-banana-citrus that's incongruous with its temperate, deciduous forest origins. They also have a subtle kick of a yeasty, floral aftertaste a bit like unfiltered wheat beer."  Yeh, that pretty well somes them up.  The flavor is downright intoxicating, and one of them sitting on the counter will fill the kitchen with a heady aroma.

People have been breeding domestic cultivars of the pawpaw for awhile.  Even though it has a wonderful flavor, there are a few impediments to it's commercial success.  Like a peach, you know it's ripe when it's flesh gives a little under gentle pressure from a finger.  Unlike a peach, it won't ripen if picked when it is very firm.  Also, the fruits on any tree tend to ripen over a period of several weeks, so they can't be picked all at once.  Once they ripen and are ready to eat, they fall off the tree in short order, bruising them.  The fruits will keep a day or two on the counter, 3 or 4 days in the refrigerator.  Apparently, if the fruit is picked just short of being fully ripe, it will keep several weeks in the refrigerator and will ripen once removed.  The challenge is in knowing when they are just ripe enough, because if they are picked too green they won't ripen at all.

I've learned to check the trees every morning and evening for dropped fruit.  I made the mistake of mowing near them last week with the brush cutter, not realizing that the low hanging branches had a number of fruits.  That destroyed about half a dozen pawpaws.  I've picked about that many so far.  Maybe it's possible to eat them until I'm tired of them, but I haven't reached that point yet. 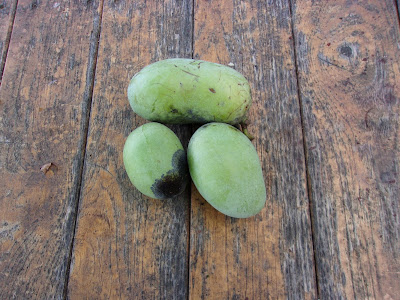 Posted by gardenvariety-hoosier at 10:29 AM

That's fantastic. It looks like you really helped that little patch of paw paw trees along, and now are justly rewarded. I've read a great deal about paw paws and how delicious they are.

I've never tried a pawpaw - the custard consistency sort of makes me hesitant. I have a feeling from your description of the tropical taste that I would love it, though. Must give it a try when I get the opportunity.

We've got several pawpaw trees planted, and one bloomed this year. I am hoping a second tree blooms next year so we can get some fruit. A friend gave us a couple last year from her trees so we could get a taste. You did a great job of describing them!