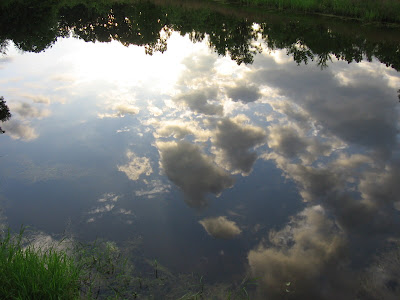 I’m getting more variety out of the beds.  This week’s haul:
Scallions 4 oz; Cucumber 9 oz; Sugar snap peas 7 oz; Broccoli 9 oz; Kohlrabi 11 oz; Lettuce 13 oz; Hungarian wax pepper 1 oz.
This is the second cucumber from the same plant, and very early.  I’m not sure about the variety.  The Burpee’s packet just says “Burpless”.  It sounds more like a descriptor than a variety name.  Burpee’s Burpless cucumber?  After producing two cukes that were very good the ensuing cukes withered on the vine.  Apparently the juvenile plant put too much of it’s energy into these early cukes and couldn’t support any more for awhile.
A plant doesn’t really “decide” to produce a fruit.  Plants don’t have a brain or nervous system.  They do have a complex biochemistry predetermined by its genetics that reacts to environmental conditions.  I don’t know why this particular plant set fruit too early for its own good.  It may be a trait of this variety or it may be just this particular plant responding to some micro environmental cues – an anomaly.
The adjacent cucumber plant on the trellis, Diva, is a variety I’ve grown the past two seasons.  It’s very prolific and produces all female flowers that grow cukes without pollination.  It started slower than the Burpee’s variety but in recent days became the larger plant.  It was now setting some flowers while the Burpee’s plant had stopped.  And the Diva cukes taste better.
So I weighed my options.  The Diva can easily cover the 4’x8’ trellis.  The Burpee’s cuke will pollinate the Diva and probably change the flavor.  So do I go with the known good or the unknown maybe as good?  Not so hard - I pulled it up the Burpee’s plant, or rather cut it off at the base.  No place for sentiment guiding the decision here.
Two hungarian wax peppers were ready to pick.  They probably should have been cut off when the flowers appeared so the energy would go into the growing plant.  But they are really good in scrambled eggs and how can you refuse an early pepper?  Seems like I went through this logic earlier.
Another Major broccoli was ready to pick, with a really nice size head.  This broccoli was seeded April 3 and set out April 26, 51 days from setout to harvest.  I should stop going on but to me this is the perfect broccoli.  Because this variety is not tall I will plant more of them next year, and fewer kohlrabi.  I’m getting tired of kohlrabi although the soup was really good. 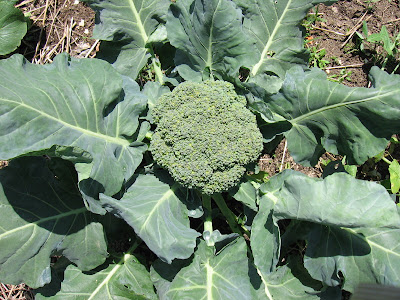 The heat wave nearly meant the end for the sugar snap peas.  Judging by the number of burned out vines and flowers it probably cut the recent harvest in half.  Still the plants made it through and now that the weather is cooler the vines are growing and producing again.  The last of the lettuce came out – two Romaine heads.
Both the squash bug and the Japanese beetle made their first appearance a few days ago.  I’ve found that a spraying of clove/garlic/cottonseed oil (SaferGro) drives the squash bugs up to the top of the plants.  Then a spraying of pyrethins will finish them off.
The potatoes are getting infested with leafhoppers which are vectoring in some other diseases.  They got their first pyrethin spray Sunday night after a treatment with Neem a few days ago.  The cages have kept the potatoes upright through two vicious storms.  The potatoes in the center cage are smaller and have more leafhopper problems.  Next year I’ll space the cages about a foot apart.
Posted by gardenvariety-hoosier at 6:01 PM

Glad you decided to go with the better cucumber plant. It's still early for cukes, which is why when I first read that you had gotten any at all, I was shocked! Amazed even! (Weird mood today) One of my absolute loves in the garden, besides really good tomatoes, are cukes. Congrats on the wider variety of harvest this week. Looks great!
~~Lori

You've really gotta be ruthless sometimes as a gardener. I'd have pulled the Burpee cuke too.

I do have broccoli envy. Down here to the south of you our cole crops did not do well in this year of the deluge. No peppers here yet either for that matter. Early peppers are hard to pass up.

First Japanese beetle? Yikes, I'm not ready for them, ever!

I have never heard of the diva cuc! Nice looking broccoli!

I don't think the pollen from one cuke to the other will affect your fruit...it changes the seed inside the fruit...it's how you get hybrids. What variety is the broccoli...very nice. Thanks for the SaferGro/pyrethins tip..may have to give it a try.

That is a really nice head of broccoli! And lucky you getting a cucumber so early. My poor cucumbers for the most part had to be reseeded because our abnormally cold year so far did in the majority of the first group I transplanted out. Luckily, a few of those still survived and are growing to a decent size... but the reseeded ones are tiny yet. If it would ever warm up, I am sure they would take off.

I had to laugh at the "Burpee's Burpless" cucumbers.... perhaps they should name them "Burpee's Not So Burpee Cukes"!

It sounds like you are getting some good harvests. I lost all my tried and true cukes this year. I'm just hoping the ones that I had to fill in will be as good. They are both parthenocarpic, but the tried and true diamant didn't produce male blossoms. Littleleaf does. Still I hope it works. It is an OP cuke so I can save seed if I like it.

Your broccoli looks awesome! Sounds like you are already getting to harvest quite a few things. We use neem also and really like the way it works!!