For some reason I looked up Bob Seger on YouTube and listened to some of the great anthems he made in the 70’s and 80’s.  It’s a rock and roll disorder common to my generation.   And that’s the theme of my post, which rambles a bit.


There was a little bit of different things this week.  The second Major broccoli was ready, a 6 oz head, not as big as the last, but it was really good.  OK it was really really good.  Broccoli to me is the best of the cole crops.  Also a kohlrabi bulb, 12 oz (I guess they are bulbs).  I’m going to try making a kohlrabi soup with it.  A cauliflower called Silver Cup, a pathetic 2 oz, which looks more like a white broccoli but not nearly as tasty.  And mixed lettuce, 5 oz.
The Midwest version of crazy 2011 weather has been March weather in May then a sharp break to August weather in June.  We had a storm go through here on Saturday night with some very hard wind gusts.  When I had a sailboat those kinds of gusts would knock a boat over before you could react.  The winds bent a lot of plants but a little staking got them back in the game.  It hit the onions the worst – broke a lot of stems.   One benefit – we got two inches of rain according to the gauge – just when things were drying out.
Can you believe this summer squash?  The variety is Sunburst, a pattypan squash, and it’s in a four foot wide bed.  Last year the first of this squash was ready in late June, which is pretty early.  This year it looks like I will get to pick squash in about a week.  This plant was seeded on April 20 and set into the bed on May 7.  So it’s been in the bed less than a month and is a full sized plant.  I’m hoping that it will stop growing soon and divert it’s energy into making squashes.  It’s definitely got enough leaf area at this point to produce heavily. 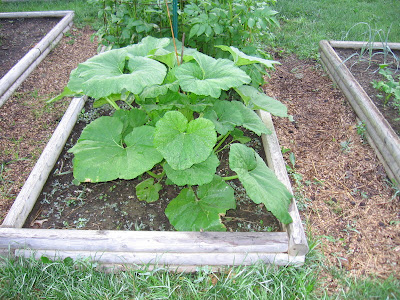 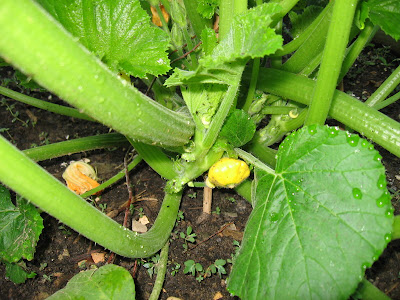 I’m still worried about the vine borer, the nemesis of squashes.  One caterpillar can kill a plant.  The butternut has been impervious, but all other squashes are fair game.  I was planning to make some row cover structures but I’ve got a lot of projects going on.  So I’m spraying the lower parts of the squash plants with Bt every few days.  Yes the borer adult is a moth, and any moth or butterfly larva will succumb to Bt.  I put out a trap to catch the adults, I hope, so I know when they show up.  It’s just the top of a Japanese Beetle trap in a container of water. 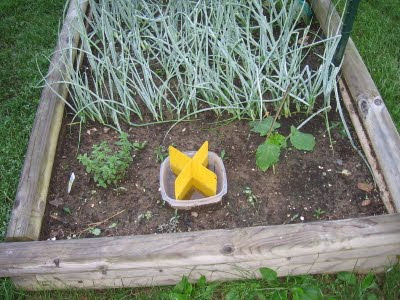 I looked up some info on the vine borer.  According to the University of Kentucky, the adult emerges when 1000 degree days have accumulated with a baseline of 50 degrees F  starting at the first of the year.  And my reaction was. . huh?  A little searching on Google was a quick education in degree days.
There are heating and cooling degree days, and there are also growing and pest degree days.  Growing and pest degree days generally use a baseline of 50 degrees.  There are small differences, but bottom line there are websites that calculate this.  And the Dep of Agriculture comes to the rescue again – with maps.  To make a long story short, this area has around 750 to 850 degree days at this point, so the borer is not far off.  A few more days in the 90’s and it’s borer time.  I found it fascinating that upper Michigan is still around 200 to 300 degree days.
Here’s the portal:  http://uspest.org/US/ and a map for the Great Lakes states, baseline 50 F:  http://uspest.org/wea/gis/NW_50gl.png .  Finding your county can be a little tricky.

Posted by gardenvariety-hoosier at 6:25 PM

Nice looking garden! I'll bet you are enjoying all your crops that are coming in. I'm with you on the degree days. Never heard of them, although I have heard of chill hours in regards to which fruit trees to plant. Gardening-it's an education!
~~Lori

Thanks for the degree days link. By the way I now have "Night Moves" humming in my head!

Cool info with map - thanks for sharing!

I'd never heard that about borers before. I always assume they come around the same time (plus or minus). For me they show up in mid July usually. They were a touch earlier last year and it was a really hot year. They have me at around 700 or so degree days. Then it takes a week or a bit less for the eggs to hatch. I always expect to see damage at the beginning of August. For my winter squash I only grow C. moschata (butternuts are one) because they are resistant. But zucchini I just plant and hope to get enough before the plant is taken down. Some years the plants can grow through the damage. Some years they die.