In mid summer the plantings in the vegetable beds can look very different after a few weeks.  Since I’ve lost some plants to the heat and drought I am experimenting a little this summer.

The winter squash are history.  I hoped the butternut would pull through but last week it was obvious that it wouldn’t make it.  That’s the first time I’ve lost a butternut squash which have up to now been reliable producers.  I pulled it up and almost no roots came up.  The lower stem and main root were mushy and rotten.  No sign of the borer.  If it’s a wilt it’s different than the bacterial wilt that took out most of the cucurbits last year.  After removing the butternut I seeded some fall green manure mix in the bed.  I also had seeded a replacement butternut about two weeks ago, but it’s doubtful that it can make squash before the first frost. 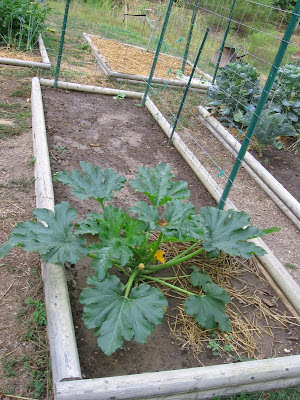 There’s still a Cocozelle summer squash at one end of the bed.  This squash was seeded on July 1, after I removed the previous squash.  At the rate it’s growing it should produce in about two weeks, that is unless it succumbs to disease.  It’s the third Cocozelle that’s been grown in that space this season.  Considering how fast a summer squash will grow, I see no reason why they cannot be seeded at intervals to work around the borer, at least until August.
I’ve got lots of snap beans growing now and can’t wait until I get some beans.  The front bed has a patch of Provider beans, some Parade scallions and Danvers carrots.  I had to put the cages back on since the rabbits had discovered the earlier patch of beans.  The bed in back has the tomatoes and peppers.  Finally some tomatoes are ripening.  I haven’t picked any tomatoes since mid-July after the heat and blossom end rot stopped them.  The pepper plants are thick with small peppers.  Looks like I’ll get to make some salsa before long. 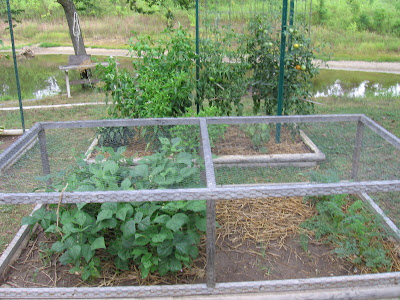 The front bed in this pic has more beans, Roma and Dragon Langerie.  They were seeded about three weeks after the beans in the above pic.  The middle bed is the squash bed, and the back bed is the brassica bed where brussell sprouts and cucumbers are growing.   I should start some kale and chinese cabbage soon if I could get motivated, but considering the weather it doesn’t make a lot of sense.  It’s still in the 90’s nearly every day. 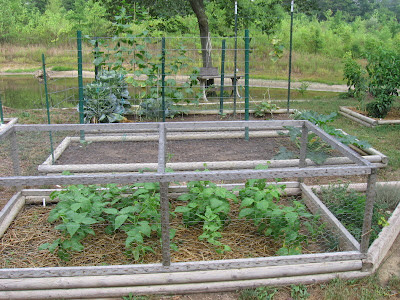 The parsnip and okra are doing great.  I tried Lancer parsnip this year instead of the old Harris Model.  The okra is Red Burgundy.  Beautiful plant but it doesn’t produce as well as the Clemson Spineless.  Carrots were planted at the end.  The back bed was the potato bed, and I just pulled up the last potatoes a few days ago.  I planted the entire bed in beans.  Since the Japanese beetle is scarce this year I thought I’d see if pole beans planted in late July could produce before the frost.  Can’t hurt, right?  So I took one of the cages and hung it on the fence posts for a six foot high cage and planted Kentucky Wonder beans at the base. 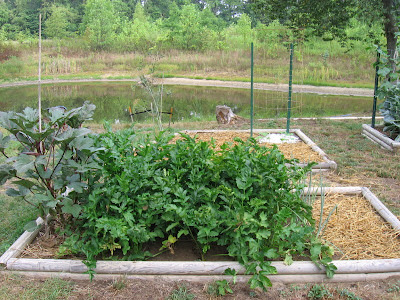 And here’s a pic from the back side of the brassica bed.  The lone Diva cucumber plant is making lots of cukes now.  I’ve found the Diva’s are better if they are allowed to grow a little larger. 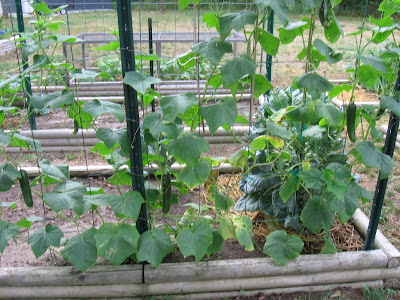 Posted by gardenvariety-hoosier at 5:21 PM

How strange that your winter squash died like that. I hope you get a fresh batch of zucchini from your later seeded plants. I like to seed a later batch of zucchini as well. Once the original plants begin to yield less due to disease or age, the new plants are producing.

I think all your Japanese beetles came up my way this year. LOL!