If  you have acreage in the country, even just a few acres, there's always plenty to do, unless one chooses to let entropy take its course.   With six acres in southern Indiana that hold a pond, woods and pasture the property has the potential to be productive.  The woodlot gives me firewood and the pasture could carry some grazing animals if it had a fence around it.

Then there's the pond.  Farm ponds have a lot of positives.  They provide wildlife habitat, recharge aquifers by holding water back that slowly seeps into the ground, and in aggregate help manage watersheds by reducing flow into rivers, in other words flood control.  This pond also has a healthy population of fish that I harvest regularly.  Ponds also require maintenance, especially on the levee, something I did not understand and mostly neglected for years until this spring, when a heavy rain made some serious gashes on the back side of the levee.

I wrote about the levee repair a while back.  After cutting down the multiflora rose that had taken over and shaded out any ground cover, spreading two truckloads of dirt, seeding and strawing, the levee looked like this, with some pipes laid over the seedling mats to hole them down: 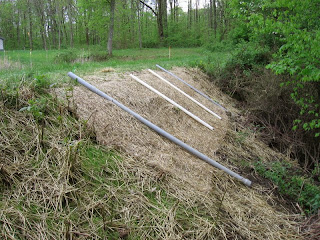 Since then the grass (and blackberries) have grown thickly in the new soil and established a root system that should hold things in place: 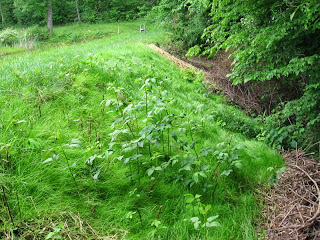 There are still some more repairs to make on the levee, but they are not nearly as critical and can wait until I have the time.  That's a good thing because there's another project that should have been completed by now, if not for the levee repair - putting wiring in the pole barn.  I was hoping to build a shed addition at one end of the pole barn this year for a workshop, but first the barn needs electricity.

This is a very basic setup with outlets for fluorescent fixtures overhead, an outside light over the door and some outlets within reach.   Putting the wires in conduit takes a lot of time, but I have a lot of time and enjoy the work. 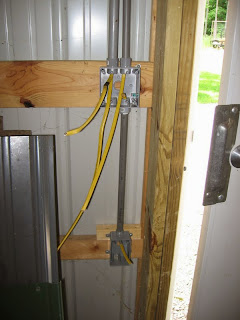 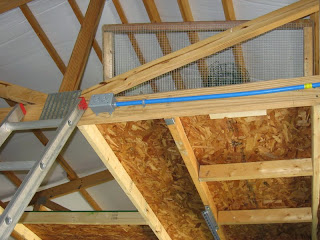 That leaves the hard part, digging a two foot deep trench 75 feet from the house to the barn.  As much as I enjoyed the wiring I dislike the digging.  It's brutally hard work.  I got started a few days ago at the side of the barn: 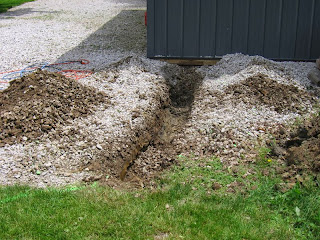 So far I've dug about half the length of the green line on the grass.  The tulip poplar was killed by the tulip scale infestation last year but it's roots remained to torture me. 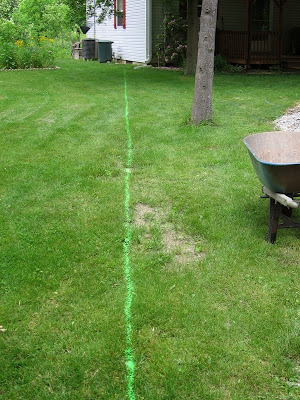 Then there's the nearly finished mobile rabbit pen that I stopped working on to repair the levee.  Someday it will have rabbits but I don't know when.  I've mostly given up on any timetables. 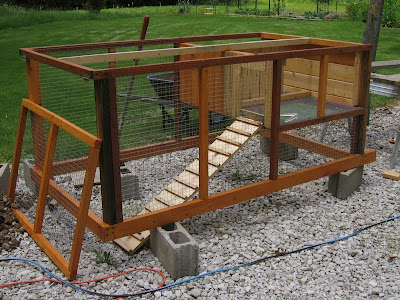 Posted by gardenvariety-hoosier at 6:23 PM

Sometimes I wish I had a bigger garden. Then I read posts like yours, and realise that I'm better off as I am!