Other than the late beginning of spring which got everything off to a slow start the vegetable plants are looking really good this year.  Last year had a very early spring but production from the beds at this point is about the same as last year - 37 lbs so far.  Much of that has come from the cole crops which are producing much better than last year.  Kohlrabi has now taken the lead with 9.6 lbs so far, edging out cabbage with 9.2 lbs and lettuce with 8.6 lbs.  Lettuce is done with the recent hot weather.  I pulled up the last bolted plants this morning.

I'm convinced that the Earthbox was made for celery.  It may keep the potting mix too damp for many plants, but for a swamp plant like celery that needs consistent moisture it's perfect.  I never liked to buy celery by the bunch because much of it went to waste.  I like celery but don't eat that much.  This way I can cut a few of the outer stems for a snack and leave the plant intact. 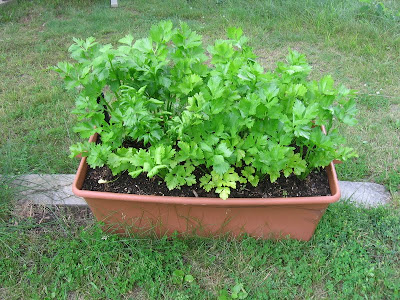 I'm also growing Millionaire okra in two self-watering containers that I made.  Millionaire is supposed to be a small okra.  I've always noticed ants on okra but never knew what they were doing.  Then I noticed a little leaf damage and noticed some aphids on the underside of the leaves.  The ants were farming the aphids, the same thing they had done on the two apple trees this spring. 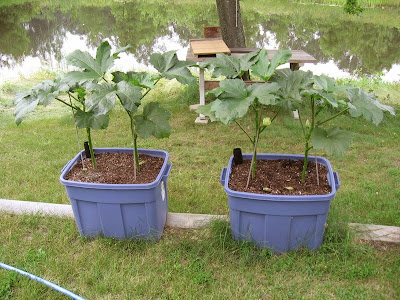 The aphids did a lot of damage to the apple trees and sprays of Neem had no effect since the leaves curl around the aphids, which feed on the underside.  I sprayed with pyrethrins for several consecutive days on the theory that killing the ants left the aphids vulnerable (Neem won't kill the ants).  I'm not sure if the spraying did the trick but the infestation stopped.  On the okra the aphids are more of a minor nuisance.  I sprayed once with Neem but won't use anything stronger since the okra is in bloom and I don't like killing bees.

It's been another productive week for brassicas.  First I got this harvest that included a few Picolino cucumbers. 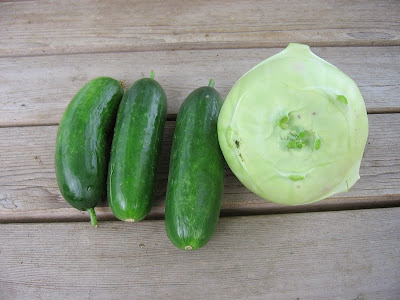 Later in the week I harvested several Gonzales cabbages and more kohlrabi. 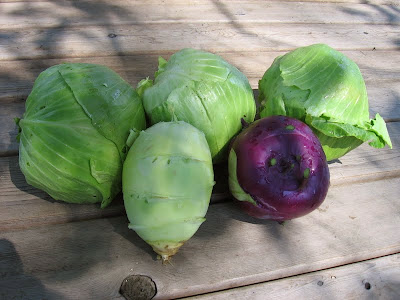 For the week:  Kohlrabi 3 lbs 1 oz, cabbage 3 lbs 15 oz, cucumber 1 lb.  Soon I expect to pick the first peppers, okra and green beans - maybe next week.  It'll be nice to get some alternatives to cole crops.  And tomatoes?  I'm hoping the first ripe tomato will be ready by the 4th of July.  This is a Cherokee Purple plant and it's loaded, although the Supersonic will produce the first tomatoes. 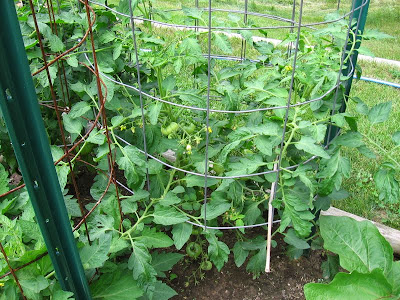 To see what other people in other places are growing go to http://daphnesdandelions.blogspot.com/
Posted by gardenvariety-hoosier at 3:57 PM

The celery is looking pretty happy in the Earthbox. And your cabbage harvest looks great! Fingers crossed that you get a ripe tomato by July 4th :)

Your celery looks great, as does your cabbage! Congrats on such great harvests so early! Fingers crossed on your first tomato!

Nice harvest of cabbage, kohlrabi, and cukes. I agree that the Earthbox is perfect for growing celery. I use a home made self watering container to grow it and it does really well every year.

I have found that growing both onions and celery in large containers is very effective - and it very much has to do with the constant moisture and loose soil structure that growing medium provides. I am regretting not doing my pots this year (got lazy this spring) because I had huge onions and excellent celery last year in pots and am getting only average to smaller varieties of both this year having put them into regular garden beds.

I have a couple of Cherokee Purple plants. They have flowers, but no fruit yet - so definitely none ripe by 4th July for me!