Lots of cole crops coming in right now, including a cauliflower.  I got 3 heads of Gonzalez cabbage, gave two of them away, 3 heads of broccoli and a gigantic 1 lb 9 oz kohlrabi.  Hope it's not woody. The broccoli heads have been small this year, but all the other produce more than makes up for it.  Not everything is shown in the pics: 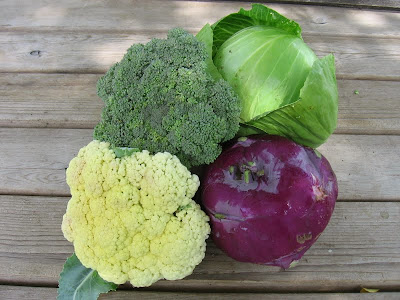 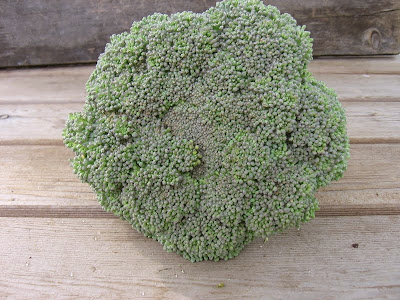 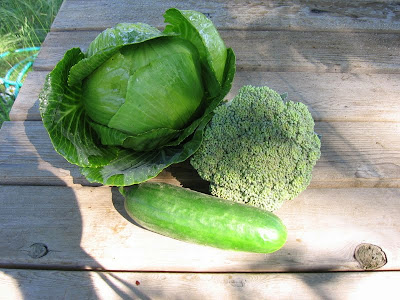 Yep that's a cucumber in the last photo.  In fact I got two.  It's a Picolino F1 hybrid, a small British type cuke that is parthenocarpic, meaning it doesn't need pollen to set the fruit.  It's also very good, even better than Diva, which is the other cuke that I'm growing.  I think the Picolino will make terrific bread and butter pickles and it looks like there will be plenty by July.

Last year I grew the same two cukes.  The Diva, a beit alpha cuke of middle eastern origin, thrived in the scorching heat last summer, while the Picolino produced a few cukes then succumbed to the 100 degree temps.

This year the tables are turned.  The weather has been moderate, temperatures mild and the Picolino has thrived, growing much faster than the Diva.  Growing the two varieties with different temperature tolerances is a good way to cover the bases, especially in the Midwest with it's unpredictable seasons.

As for what's coming, the tomatoes/peppers/eggplant are not likely to ripen until sometime in July.  That leaves green beans and squash.  The first patch of green beans are Provider beans, one of my favorite varieties.  It should begin setting flowers any day.  The Kentucky Wonder beans are climbing up the strings.  They shoot a vine several feet up a support then open their leaves.

As for the squash I said in an earlier post that I was going to pull all of them up since they got off to a slow start in the cool weather in late May.  Well I pulled the worst looking winter squash up and reseeded.  I'll compare how they do with the ones that were spared.

I left the yellow zucchini in the ground but seeded some backup plants nearby.  Good thing because the two zucchini plants literally fell over about ten days ago.  They were pulled up with hardly any effort to reveal a puny root system.  This plant had the larger root structure.  I wish I knew what was causing this.  I found the same problem with the summer squash last year. 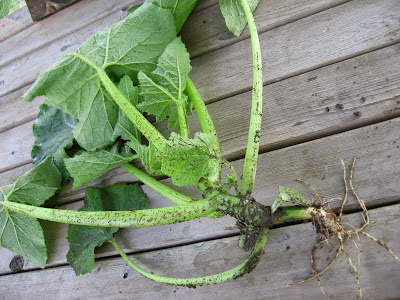 Posted by gardenvariety-hoosier at 4:44 PM

Great spring crops! They look gorgeous! Good looking cucumber too. I have started getting mine last week too! Hope you solve your root problem!

Great looking harvest. That cabbage is beautiful and holy cow a one and a half pound kohlrabi, that's a monster!

Funny how we want the things we can't have — we've never had luck with cole crops, and yours are envy-worthy!

Strange about the zucchini. Its frustrating when the jokes about giving them away abound. My zucchini did not germinate so I reseeded the other day. I hope your second sowing does better. The broccoli and cauliflower look delicious.