Holidays are a good time to check the progress in the garden beds.  It’s really quite amazing the progress that the vegetable garden makes in the month of June.  Here’s a picture of the beds on May 30.  To that date most of the production came from the center front bed with lettuce and spinach and the center bed with cole crops.   Most of the summer plants had been in the ground for two weeks. 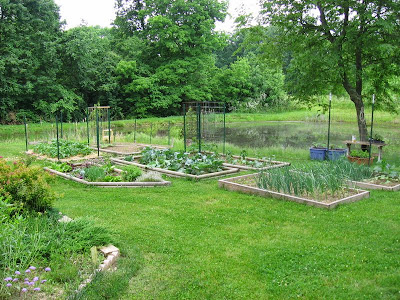 Except for a few cole crops those plants are out now.  Carrot, beet, scallion and bean seedlings are growing in their place.  The foliage development of the summer and storage crops has been rapid over the last month.  The garden is approaching peak foliage (a phrase I just made up) and also peak photosynthesis.  Here is the same view today. 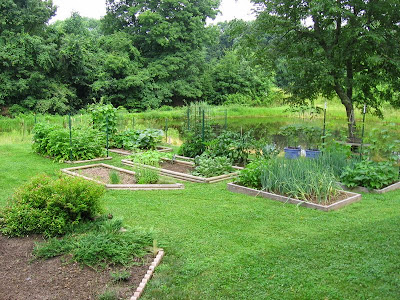 The Silver Queen okra produces an impressive canopy for a young plant.  I thought it would shoot up quickly but its habit looks more spreading.  The leaf on the lower right measured 18 inches across.  The okra pod is almost white, but it has to be picked early or it goes woody. 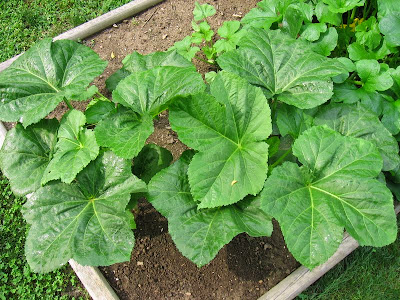 I built the SWC’s this spring and planted them with Millionaire okra, a compact variety from Johnny’s.  My hope is that in a few weeks there will be enough okra to can some okra pickles.  With some hot peppers in the jar they are hard to resist. 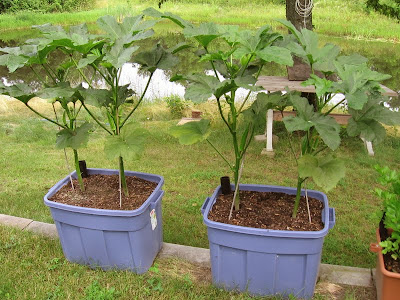 The Honeybear acorn squash is 4 feet across.  So far I haven’t seen any squash bugs or eggs, and I’ve sprayed the stem a few times with Bt in hope of keeping off the borer.  As a matter of fact the garden has had remarkably little bug pressure to this point.  I’m keeping my fingers crossed that it’s not hit by bacterial wilt.  A few years ago I cooked and froze the glut of acorn squash, since they don’t keep that long. 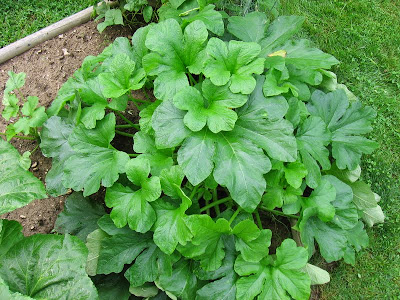 The butternut and teksukabotu squash are in the new bed close to the pond, on the barren ground that was scraped clean of topsoil when they built the pond.  The plants seem to be getting a footing and are growing rapidly.  The potatoes in the potato box aren’t as vigourous as I like.  Well it is an experiment. 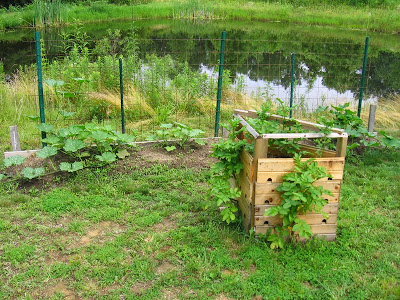 I was hoping for the first tomato by the 4th of July and there’s one that has a blush of red but it’s not ready.   The past week was cloudy rainy and cool and the hot weather plants have not done much.  In fact we had several days with highs that did not reach 70 degrees, a rarity in this area.  The tall plant in back is Supersonic, the plant on the left San Marzano, and on the right Cherokee purple.  I grow Supersonic nearly every year and experiment with other varieties. 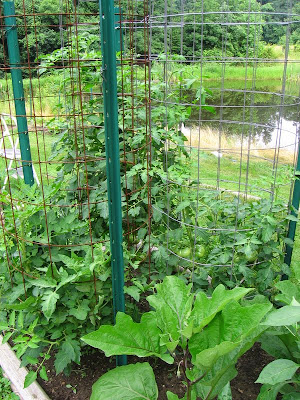 It looks to me like the Cherokee purple is setting out way to many fruits for the foliage it has.  In fact that may be why its growth has lagged behind.  It’s hard to see in the picture but the plant is thick with green tomatoes and blossoms.  Some of the fruiting stems have at least 10 blossoms on them, and it looks now like some of them are not setting.  Other than pruning the suckers I'm not going to prune any blossoms. 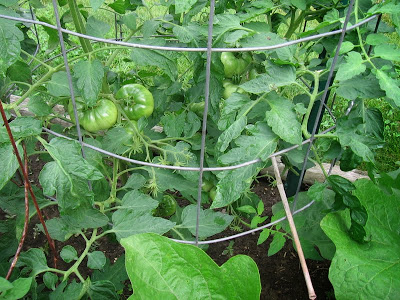 This is my first year growing sweet potatoes.  They are just now beginning to escape the box.  I don’t know if this summer will provide enough growing degree days to make a crop.  I’m sure they will make something. 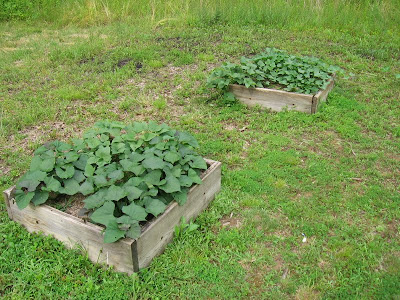 That's the overview in mid-summer.  Knock on wood, it's shaping up to be a productive growing season.  Declare your independence and grow your own food!
Posted by gardenvariety-hoosier at 2:56 PM

Some very nice veg there! I have a couple of the Cherokee Purple tomato plants for the first time this year. They are way behind yours - just setting their first fruit - but I think that having seen yours I may decide to thin out the fruit (which can apparently get quite large) to avoid overcrowding. I think a few good fruits would be better than lots of mediocre ones.