The calm before the storm

Was that melodramatic enough?  Not much came out of the garden this week.  The first patch of Provider beans has mostly stopped producing.  Maybe it was the spell of cool cloudy weather two weeks ago or maybe they are just about done.  In a few days the patch of Tendergreen bush beans and the Kentucky Wonder pole beans will start producing.   I expect a lot of beans.

The two Lavendar Touch eggplants are about 4 feet tall and very healthy this year.  Up to now they've endured almost no bug pressure, and eggplant is a bug magnet.  Today I noticed the first flea beetles.  There's some eggplant just about ready to pick and many more will follow. 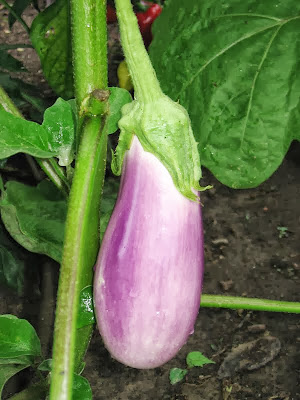 The tomatoes are just about ready.  I had to put in a support for the Cherokee Purple plant as the lower cluster was pulling the whole plant down.  The cool spell was really hard on this plant, infecting it with a variety of fungi and wilts.  With my plants crowded like they are, a variety that does not have the built in resistence will suffer.  I had to cut nearly all the foliage off but it's growing new foliage. 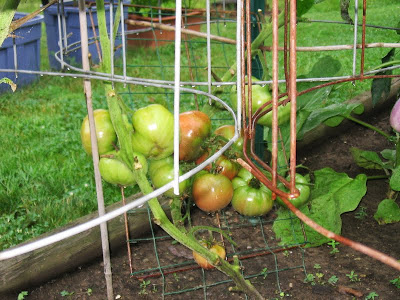 The Supersonic tomato actually did lose a lower cluster of tomatoes, just peeled of the stem from too much weight.  I put the cluster on one of the onion cages.  They should ripen up OK. 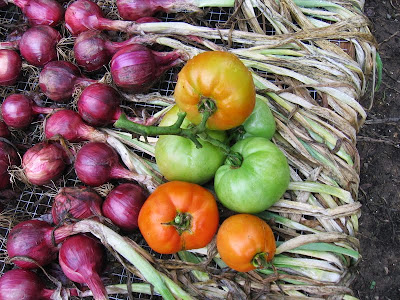 Even with a cluster missing, the Supersonic plant is just loaded, and already six feet tall. 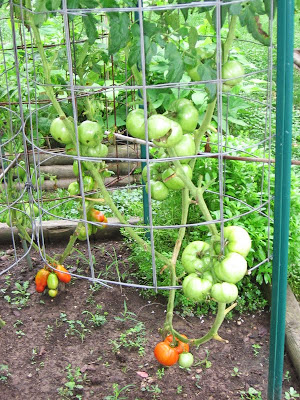 Then there's squash.  The first summer squash will size up in a few days.  The Teksukabotu winter squash planted down in the "barrens" down by the pond is going crazy.  I let one runner go straight away from the plant to see how far it will go.  Right now it's about 20 feet long and growing.  The squash are very healthy this year.  What really amazes me is the complete absence of squash bugs so far, not even egg cases.  Maybe the late winter killed many of them.  In fact the bug pressure so far has been almost nonexistent, just a few cabbage worms and Japanese beetles.  Even the mole, my nemesis, has vamoosed. 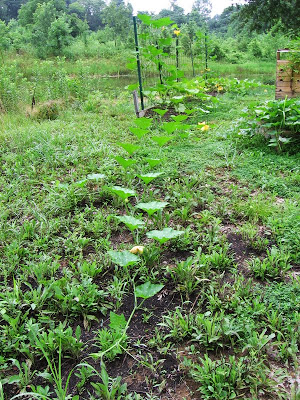 As for the okra, production keeps increasing.  This is the Millionaire okra in the SWC's. 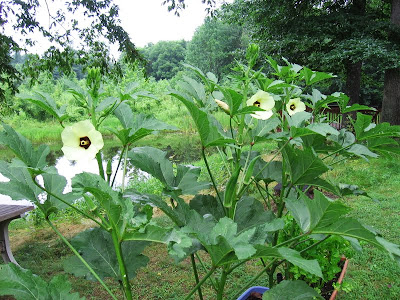 As for the harvest.  Well it wasn't much this week.  Some okra, cucumbers, beans and one tomato.  Just one picture should do: 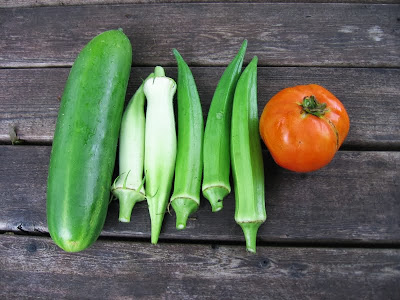 .
Posted by gardenvariety-hoosier at 3:02 PM

A great looking harvest this week. We are just on the edge of a big boom in our garden as well. A few weeks from now and I will be complaining about too many veggies and too much to do!! :)

Wow those clusters of tomatoes are truly impressive. My plants are really healthy this year and have lots of fruit on them, but only the Stupice have large clusters like that. I know what you mean about the calm before the storm... it's like the garden is taking a deep breath before sprinting to the finish line of crop production.

Wow! Your tomato plants are loaded with nice looking tomatoes. The red onions are so pretty. I missed your post on your onion harvest and just went back and read it. I need to add Ruby Ring to my "want" list,

Nice garden and nice harvest. I usually grow one Cherokee Purple each year because I love the fruit but it usually catches something. I tried a grafted one this year but it not doing well, has one small tomato set (which at least doesn't have BER).

The difference between your tomatoes and mine is remarkable, mine are mostly all leaves and little fruit. I've still got a long wait before my first ripe homegrown tomato. Enjoy the calm while it lasts!

Michelle, mine are at the other extreme, too much fruit and not enough foliage. There's a happy medium somewhere.