What a year.  The corn is as high as an elephant's eye.  The land around these parts is a mix of field crops, pasture and forest, depending on the terrain.  Driving the roads through the bottom land around the White River is like driving through a tunnel of corn.  It's surely different than last year.

I'm waiting on enough tomatoes to ripen to make some salsa.  There's enough jalapeno peppers ready.  One cluster broke off the Supersonic plant and several Cherokee purple tomatoes have fallen off.  I put them on one of the onion screens to ripen.  It's about time for the potatoes to come out, but they still have some green foliage and the moles have not been a problem this year, so I'll wait a little longer.

The Ruby Ring onions were combined onto one screen.  I'm going to put them into the pole barn at the end of the day as there are storms headed this way, but right now it is sunny. 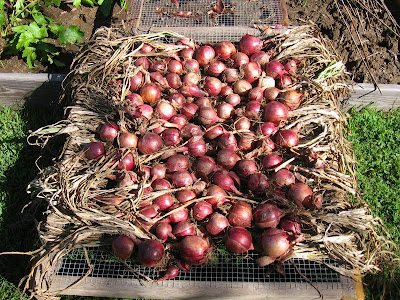 There's a few in there with bad spots that I'll remove and use soon, but most of them are rock hard.  Now I've got to find some onion bags and find a place to put them.

As for tomatoes, no more heirlooms.  I don't have the room to give them the air they need.  The Cherokee purple has got fusarium wilt and several other diseases, and has given the wilt to the other plants where they contact.  I'll be happy if it maintains enough foliage to ripen the tomatoes it has already set.  With the garden expansion I'll be able to plant at least 4 cages next year, and the modern disease resistant varieties will give me the production I need from those cages.  That may sound like heresy but it's certainly more practical from my standpoint.

The first eggplant and summer squash were picked this week.  Here's the first eggplant, Lavendar Touch from Pinetree.  This eggplant has done really well for me.  Pinetree says it won't be selling it next year so I'll have to find another variety. 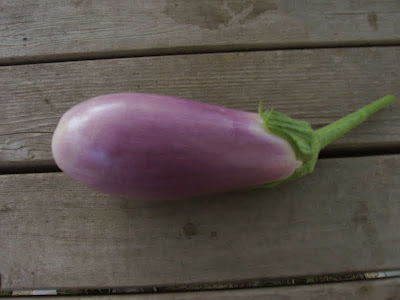 I had some bad luck with the first summer squash, a yellow zucchini that was touted for disease resistance but kept dying on me.  Then I planted a variety called Genovese, either from NK or Ferry-Morse,  picked up at the big box store.  Probably an older Italian variety and it's crowded badly by the huge acorn squash but that's OK.  I don't want massive amounts of summer squash, and these are trickling in.  It's actually pretty good.  I've been stir-frying the squash with okra and eggplant. 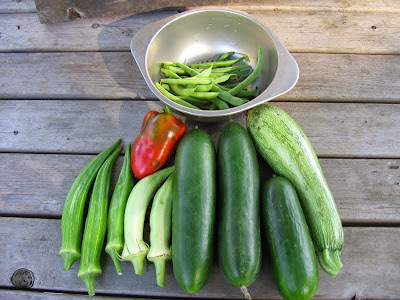 Later in the week I got another squash, eggplant and tomato. 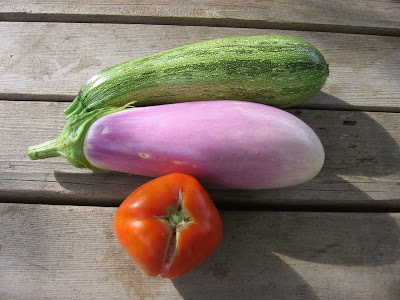 Your Ruby Ring onions are a beautiful sight!

I have had problems with Cherokee Purple as well, the plants are small and not very productive.

I love Lavendar Touch eggplant, I grow it every year. Nice onion harvest.

I don't feel bad about growing hybrids if that's what it takes. Heirlooms are great and I try to grow as many as possible, but they don't always work. Veggies from Amish country don't necessarily like foggy coastal California! Gotta love that haul of onions.

The Ruby Rings look great, may try them next year. I ordered Red Wing and got Red Bull as a substitute. I hear you on the heirloom tomatoes. My Cherokee Purple (a grafted plant no less) is sitting there with a couple of small tomatoes. At least this year it is disease free, the one last year from a big box store developed late blight.