The first tomato is soo close.  But as they say, close only counts in horseshoes and hand grenades.  Same with peppers, although I’ve been picking some green jalapenos for over a week.  It’s that time of year when the beds produce a little bit of many different things, but not enough to make it worthwhile to freeze or pickle.  The cucumbers got off to an early start but have stopped growing the last week because of the cool cloudy weather lately.  But today was like a real midwest summer day, humid and sunny, and I think the plants are responding.

At this time I’m trying to understand my logic in planting six okra plants.  I know what I was thinking:  I can pickle okra and enjoy those vinegary pods all winter.  To that end I set four plants in self-watering containers and two plants in the garden.  In the past I’ve found that by sometime late in August two okra plants, at that point small trees, could produce a prodigous amount of okra every day.  Now I have six plants,  and okra doesn’t keep very long.  I realize I’ll have to blanch and freeze some of it, probably several times a week.  It’s beginning to sound like work.  Anyway I love okra.  Okra and green beans are two vegetables I can eat nearly every day, so freeze them I will.

Looking around the garden, the Tendergreen snap beans are growing quickly and for a bush bean showing a lot of vining.  I’ve never grown them before and thought they would have a typical bush bean habit.  I believe that bush beans have had the vining tendency bred out of them, coming from wild plants that were true vines, but the breeders could never get all the vine out of the plant.  I’m not sure if I like this or not, but decided to just go with it and put some bamboo stakes in the ground for support.  It all comes down to whether or not I like the bean itself.  Today some of the vines are already to the top of the supports.  I think this bean was introduced in the 1930’s, about the same time as Provider, which has a bushy habit. 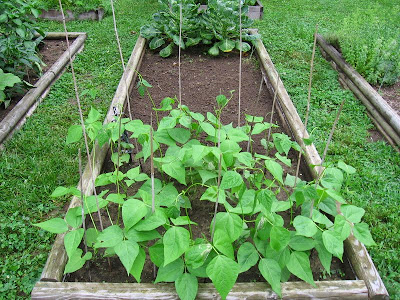 Most of the onions I planted are Ruby Ring from Johnny’s.  I wanted an onion with the longest possible maturity thinking that the longer it is in the ground the more onion I’ll get and red onions have the most days to harvest.  According to the catalog some of their red onions should not be grown here at 39 degrees latitude – too far south - but this one is in its comfort zone.
Anyway a packet of the red onion seeds with 250 seeds would not seed 144 cells (two trays) at two seeds per cell.  I had ordered Red Tropea onions from Pinetree to seed the remaining cells but they were out, so I bought some Burpee yellow onions at the lumber store and planted the unseeded cells with those.  The yellow onions blew over last week in a passing storm meaning they were about done anyway, so I pulled them out to dry.  If I had spent another 65 cents I could have had a packet of a thousand seeds from Johnny’s.  In hindsight I can say it often pays to do the math. 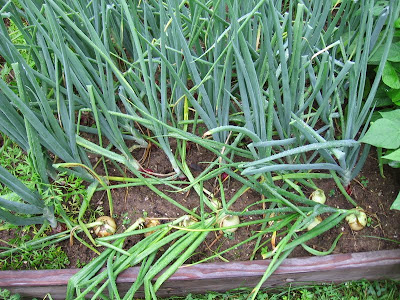 It was time to harvest the garlic.  I don’t know squat about garlic.  This is the first year I’ve grown it.  Everybody else in similar climes was pulling up their garlic so I figured I’d better get mine out too.  I bought the cloves at the farmers market last year and have no idea what kind it is.  Sunday evening I dug them up and put them on the screen with the onions to dry.  Today I set up a screen in the trusses of the pole barn and put them on it - garlic in the rafters.  It’s definitely warm up there, but dry. 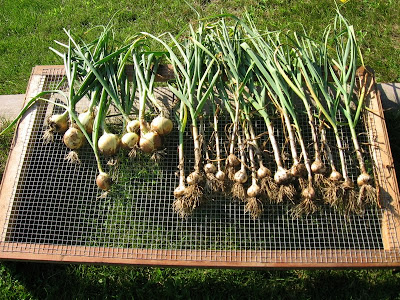 Tomatoes, peppers and eggplant are close.  Beans are dribbling in, with a picking of Provider beans every other day, enough to give me some beans until the pole beans produce.   The last cauliflower and another Gonzalez cabbage came out of the brassica bed.  I consider getting one head of cauliflower reason to celebrate and this year I got two.  I’m sure I’ll plant more next year and the weather will not cooperate. 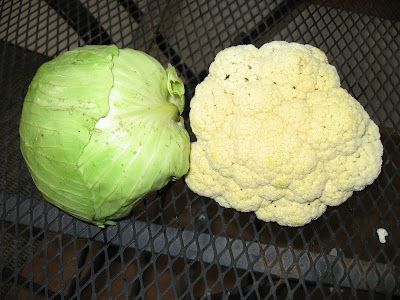 Also more beans, okra and cucumber.  This is what I picked on Sunday.  The Millionaire okra is a very nice okra.  It holds a while before going woody and has excellent flavor.  Last year I grew Red Burgundy okra, a beautiful okra but it tended to go woody very quickly after it sized up. 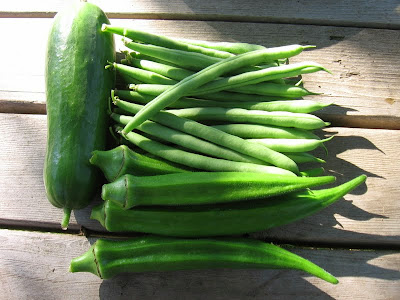 I pulled out two of the celery plants from the earthbox since the plants were getting crowded.  I planted two rows of five plants when I think four plants in a row would have been better.  The stems are small but they are delicious, and I might use the leaves too. 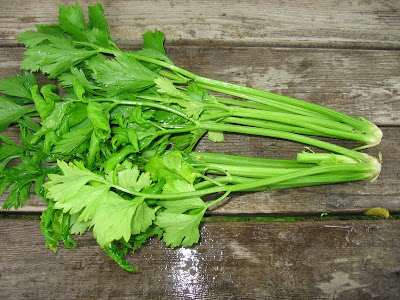 Nice harvests! Your garlic looks good! Your comment on the logic in planting six okra plants had me giggling. I think we all do this with one crop or another. I was just thinking the same thing about all the zucchini and summer squash I planted this year. I bet you will be thankful to have preserved okra this winter once the memory of dealing with the extensive harvest fades.

I've never grown okra, in fact I'm not sure I've even tasted it. It's not very popular in our part of the country. What's it like?

You are getting a lot of really good eating out of the garden this week. I like okra too but we cannot grow it here in our milder growing climate. I cannot imagine dealing with production from six plants of them though! LOL!

The onions that did not blow over look really gorgeous. I am having a "ho hum" onion year after having a great one last year. They are producing and will be reasonable sized but nothing like the large sweets I grew last year. Really varies for me year to year.

You did good on the garlic. They are ready to harvest (generally) when the outer few leaves are browning. Each leaf is reflected as one paper layer over the bulb. The first outer leaves drying mean that the outer covering of the bulb is drying and hardening and it is time to harvest. If left until all the leaves are browned the bulb will be split open etc, so you timed it well.

GM- thanks! SA - okra is a hot weather crop, more common in the south. If you just cut it up and boil it okra has a lot of slime. I prefer to stirfry okra. I think it has a great flavor, green and peppery. Kitsap - Thanks for the info on garlic. When I saw that Dave at Our Happy Acres, about a hundred miles south, pulled up his garlic I thought mine should come out.

Your onions, cabbage and cauliflower look fantastic! I've never had any success with them.

It's my first year growing Tendergreen beans, and I have to say they produce loads of tasty beans that stand up well to cooking in stir fries.