In a few more days all of the beds will be planted.  But not yet.  There's a cool patch of weather that will persist through the weekend, and I'll wait for that to pass.  Early next week the weather will be sliding into summer, and I'll plant okra, squash, sweet potatoes and eggplant.  Today I set up some structures for the potatoes and cucumbers.

I've given the potatoes some sort of support every year.  Without support the stems will get spindly and with the first good storm get flattened.  I don't like flattened potato plants.  If the plants are not standing then air cannot circulate through them.  They get diseases.  They'll get molds and mildews eventually, but I'm convinced that if the plants are supported they will stay healthy longer and produce more potoatoes.

Last year I put stakes in the 4 corners of the potato bed and strung string around the perimeter.  This did nothing for the middle of the bed, it just kept the plants out of the pathways.  So I decided that this year a string would go between each row.  To do that a six foot fencepost was pounded into each corner and wood crossbars were screwed to the posts (this is where a battery powered drill is very handy). 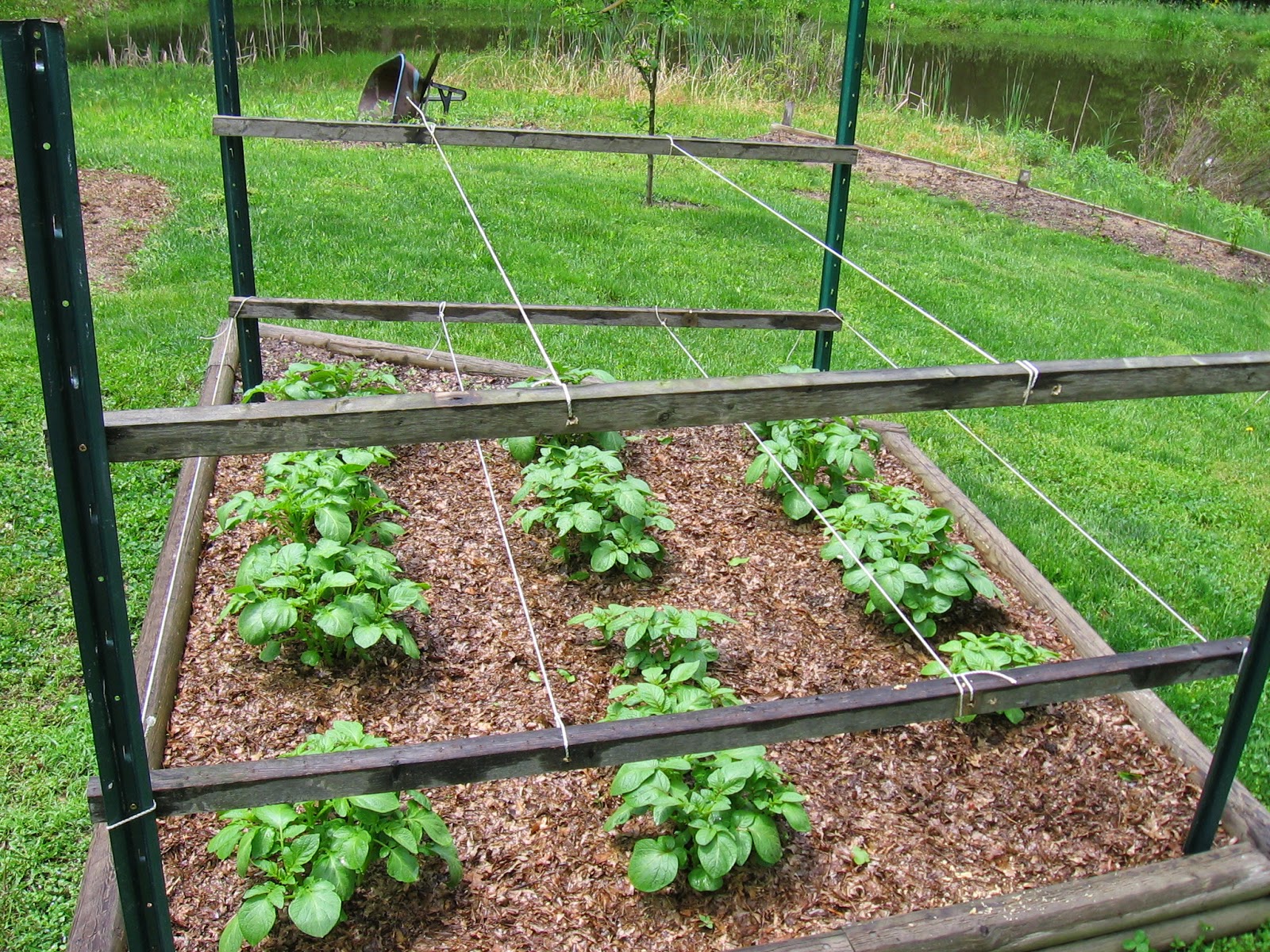 The posts have convenient holes for the screws. 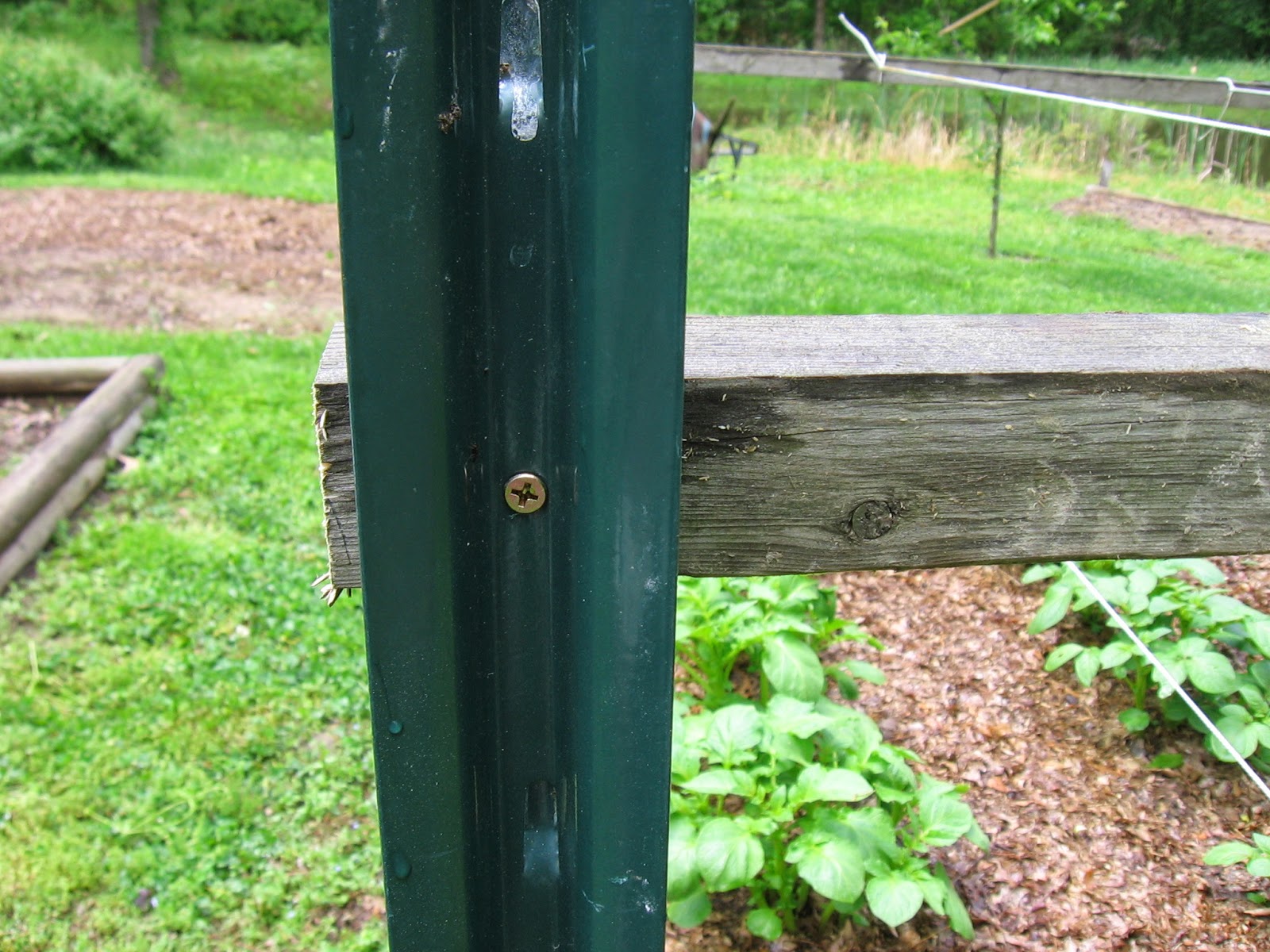 Holes were drilled into the crossbars for the string.  I decided to go with two levels of string.  Because of the odd shape of this bed one of the posts was set outside of the bed. And of course I ran out of string.  Now if only that last potato plant would come up. 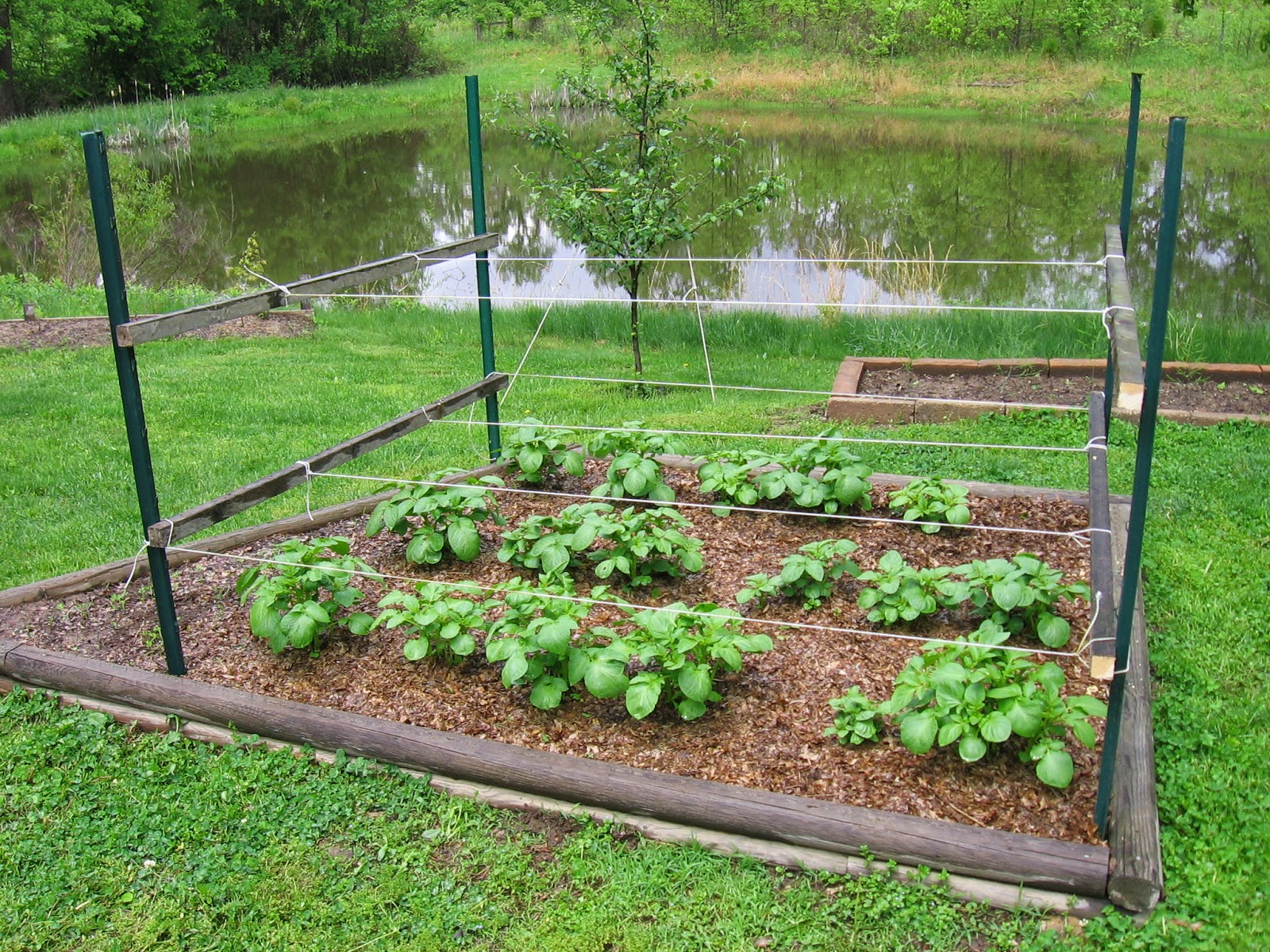 The cucumbers definitely need support.  Again 6 foot fenceposts were used, this time with a 4' x 8' piece of concrete remash as the netting.  The spacing between the wires is exactly the same as the spacing between the hooks on the posts - very convenient.  The remesh was suspended about 1 and 1/2 feet above the soil.  After the cukes are planted I'll have to set some wires from the net to the ground to give the cucumbers a path up. 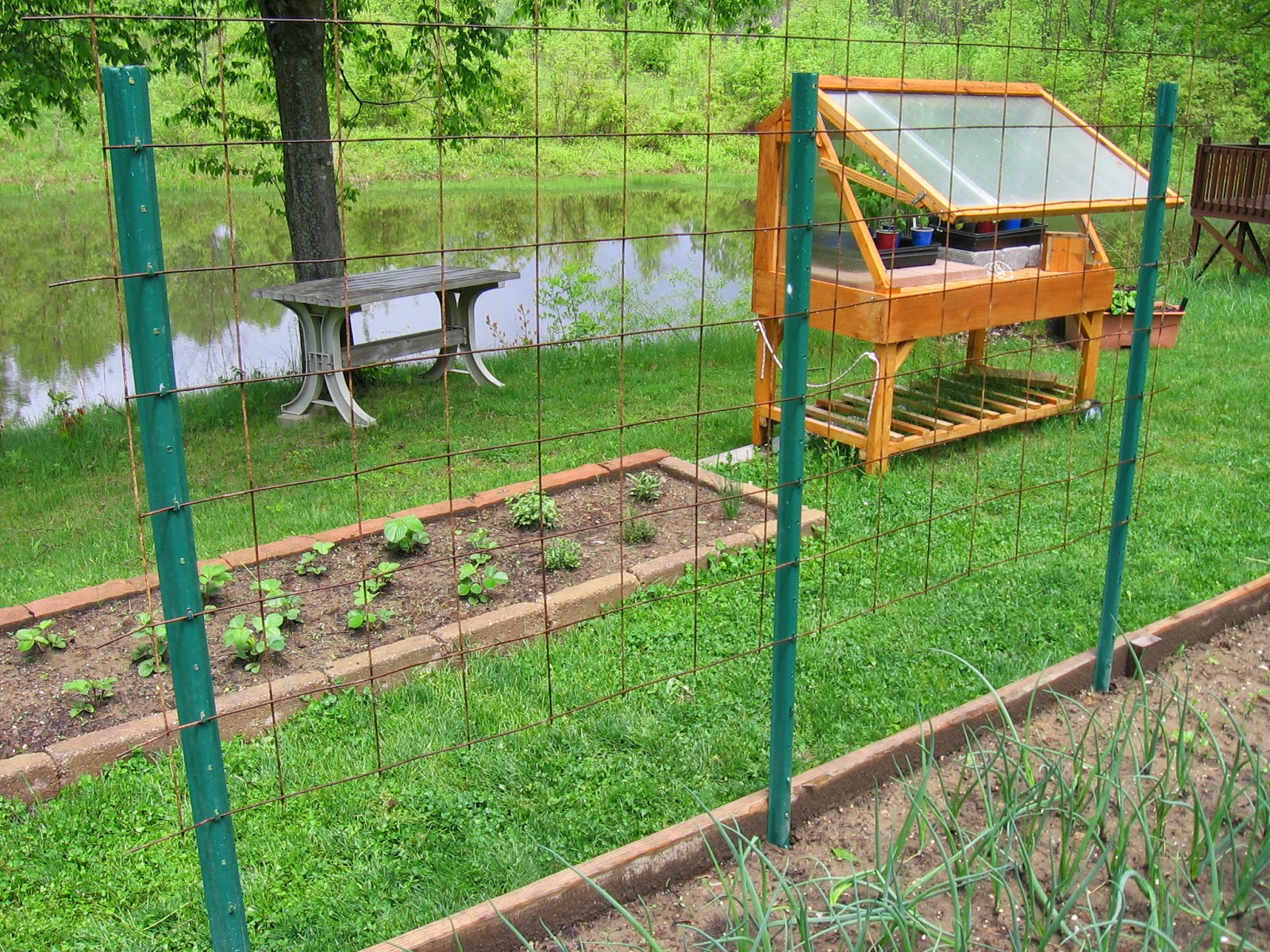 You can see that the bed is planted in onions.  I have found that the cucumbers and onions are good neighbors.

The greens bed has a nice supply of lettuce.  It's been a good spring for lettuce, not too hot or cold.  The bed has a cage over it to keep out the bunnies, who like lettuce as much as I do.  There's also some spinach and cabbage in there. 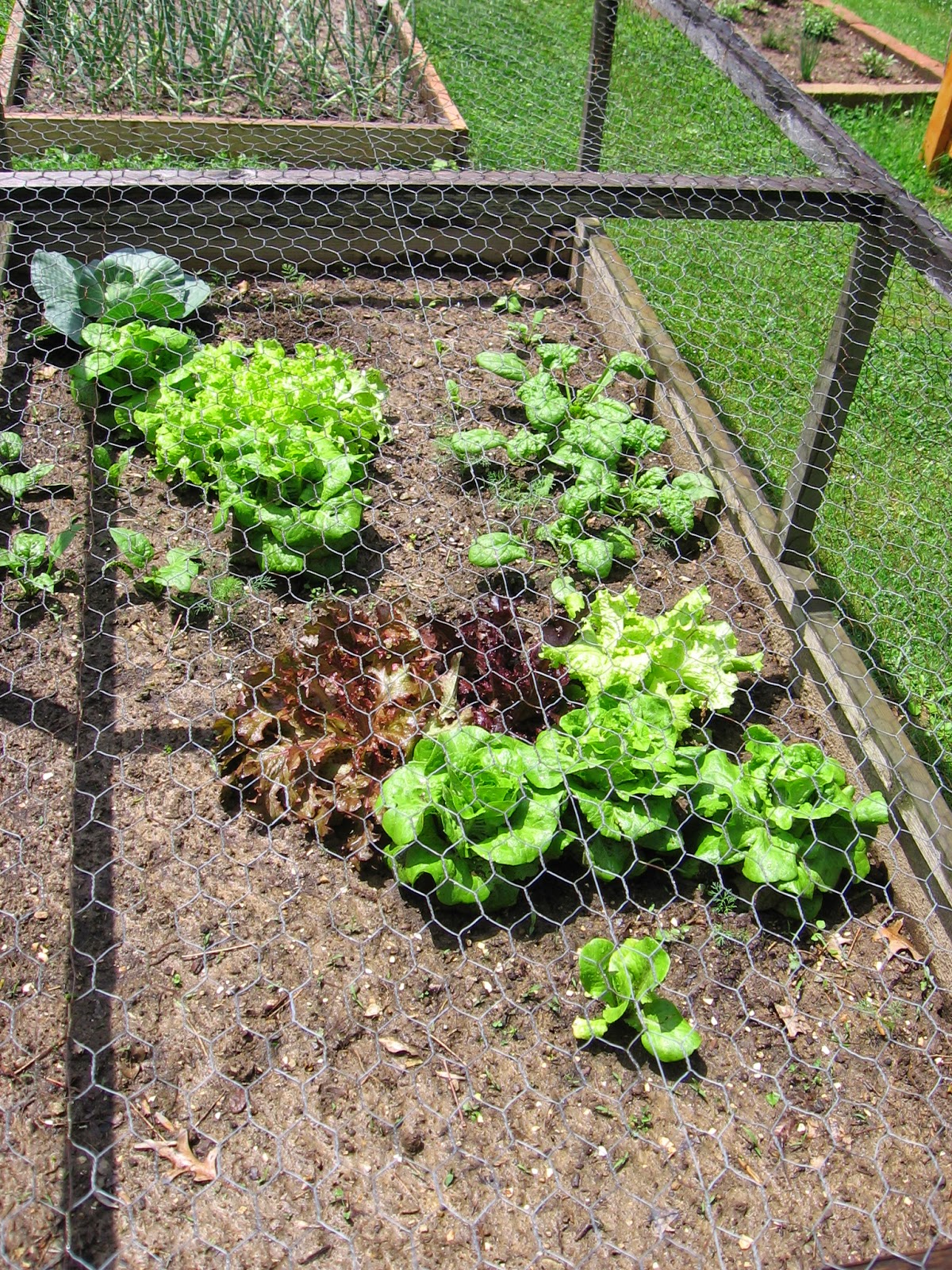 The lettuce in the Earthbox is going strong.  I had to pull out two seedlings to make room for the first of the Florence fennel.  This lettuce is younger than the lettuce in the bed but has already caught up. 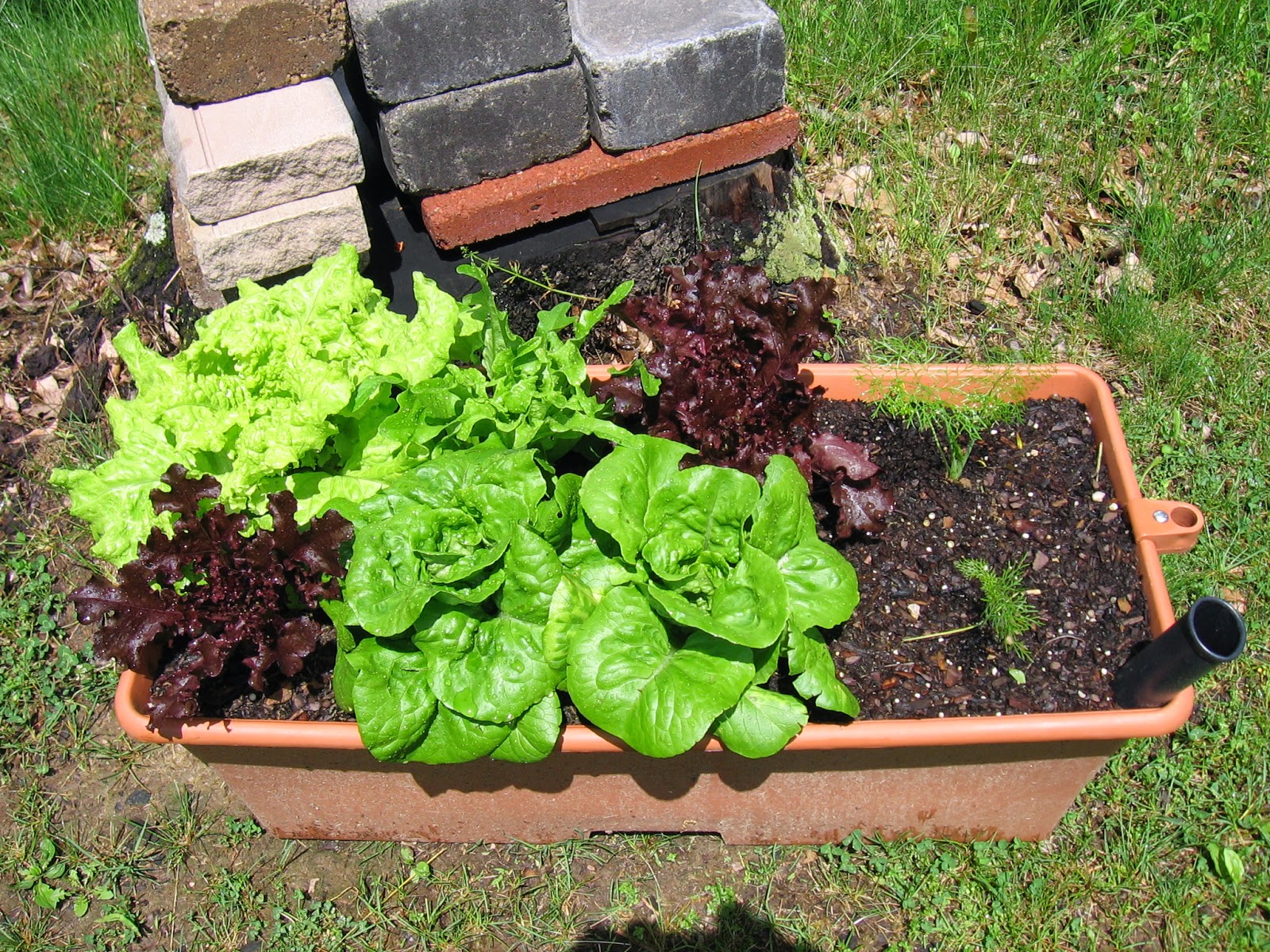 Posted by gardenvariety-hoosier at 5:25 PM

I admire your well-thought-out use of supporting structures. Plants do often perform better with a bit of help. Something I have been toying with is the idea of making removeable wood-and-wire cages that would exactly fit my raised beds. I am still undecided...