Insects, other invertebrates and various furred and feathered critters can destroy a vegetable garden.  Microbes - fungi, bacteria, and viruses - can kill the plants from within their cells.  They are the bane of every gardener.  And yet, with good management techniques, the various pests can be subdued for the most part without blanket applications of synthetic chemicals.

Every gardener has their own pests to deal with.  I see that many people have a constant war with slugs and root nematodes.  My garden has never had problems with them.  Maybe it's because I live in the country and they've never found their way into the beds.  Can't really say.  I try to keep plant families together in a bed.  For example, tomatoes, peppers and eggplant are all in one family, solanacae.  Broccoli, kohlrabi, cabbage, cauliflower are all brassicas.  Every year I draw up a plan that rotates the plant families to different beds.  I try to maximize the time intervals before a plant family is replanted in a bed, usually about 3 years.

The midwest went through an abnormally long and cold winter this year, which can take its toll on insects that overwinter in the soil.  Because of that I expected insect pressure to be light this year, which it is.  One exception is the Japanese beetle.  As a result of some extreme weather in 2012 - heat, drought, and an early spring warm spell followed by a hard freeze - the population of these invaders has been suppresed the last few years .  I expected their numbers to be down this year too, but they have rebounded somewhat.  More than anything they love pole beans, with the highest leaves getting the most attention. 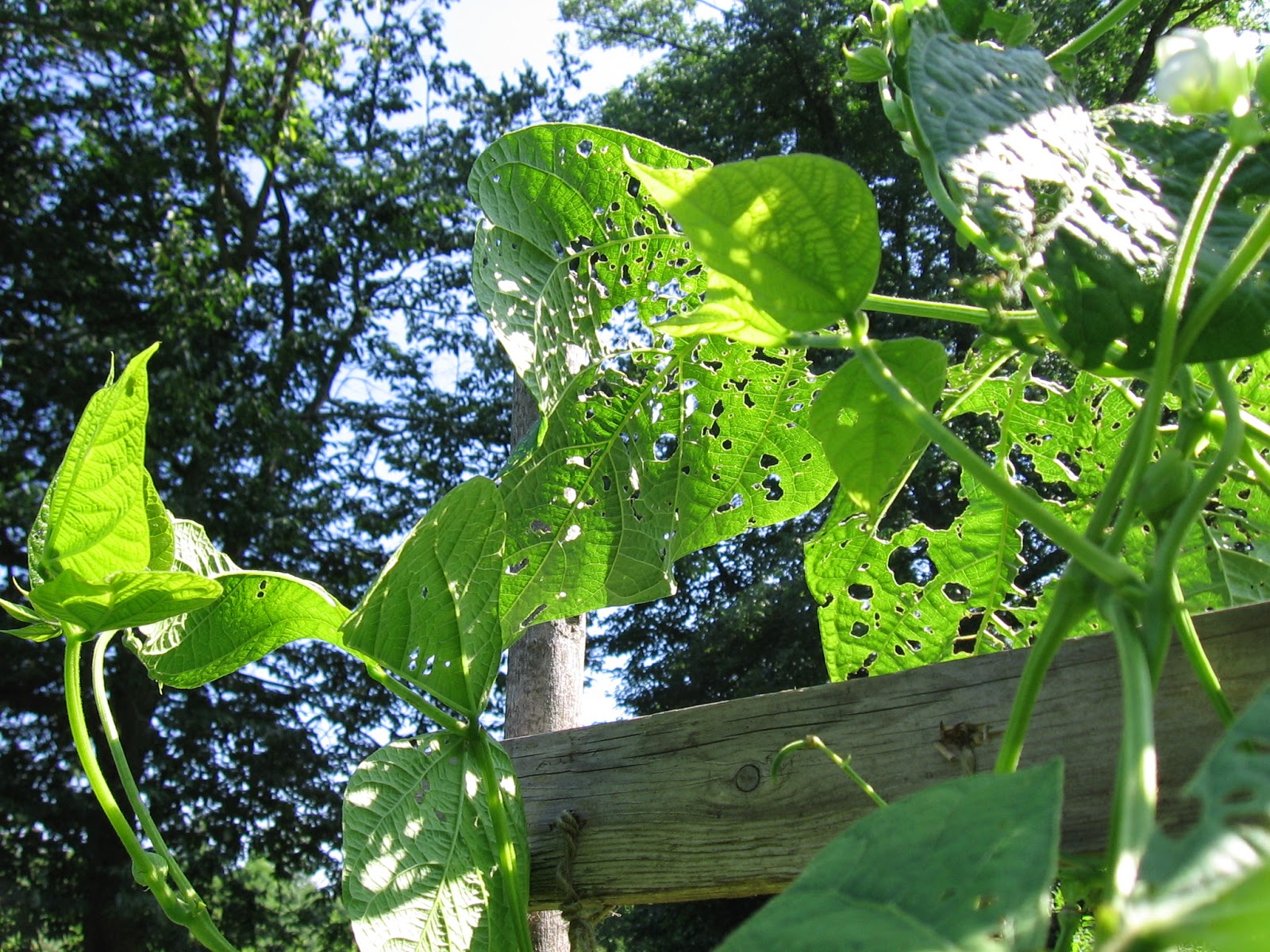 I debated whether to put out traps but decided they would just attract more beetles that would eventually find the beans.  They aren't eating enough to ruin the beans and I just pick them off when I find them.  Nasty bugs.  They are the reason I stopped planting pole beans several years ago.  Next year I expect they will be much worse.

The tomatoes have been suffering from early blight or some other fungal leaf disease.  These tomato plants, Crimson Carmello and Pompeii, are fairly recent varieties that are supposed to have some disease resistance.  More than the blight,  I'm concerned about Fusarium Wilt which completely destroyed a Cherokee Purple plant last year. Most modern varieties are resistant to the wilts and this year I have not planted any heirloom tomatoes, so I shouldn't have to worry about that. 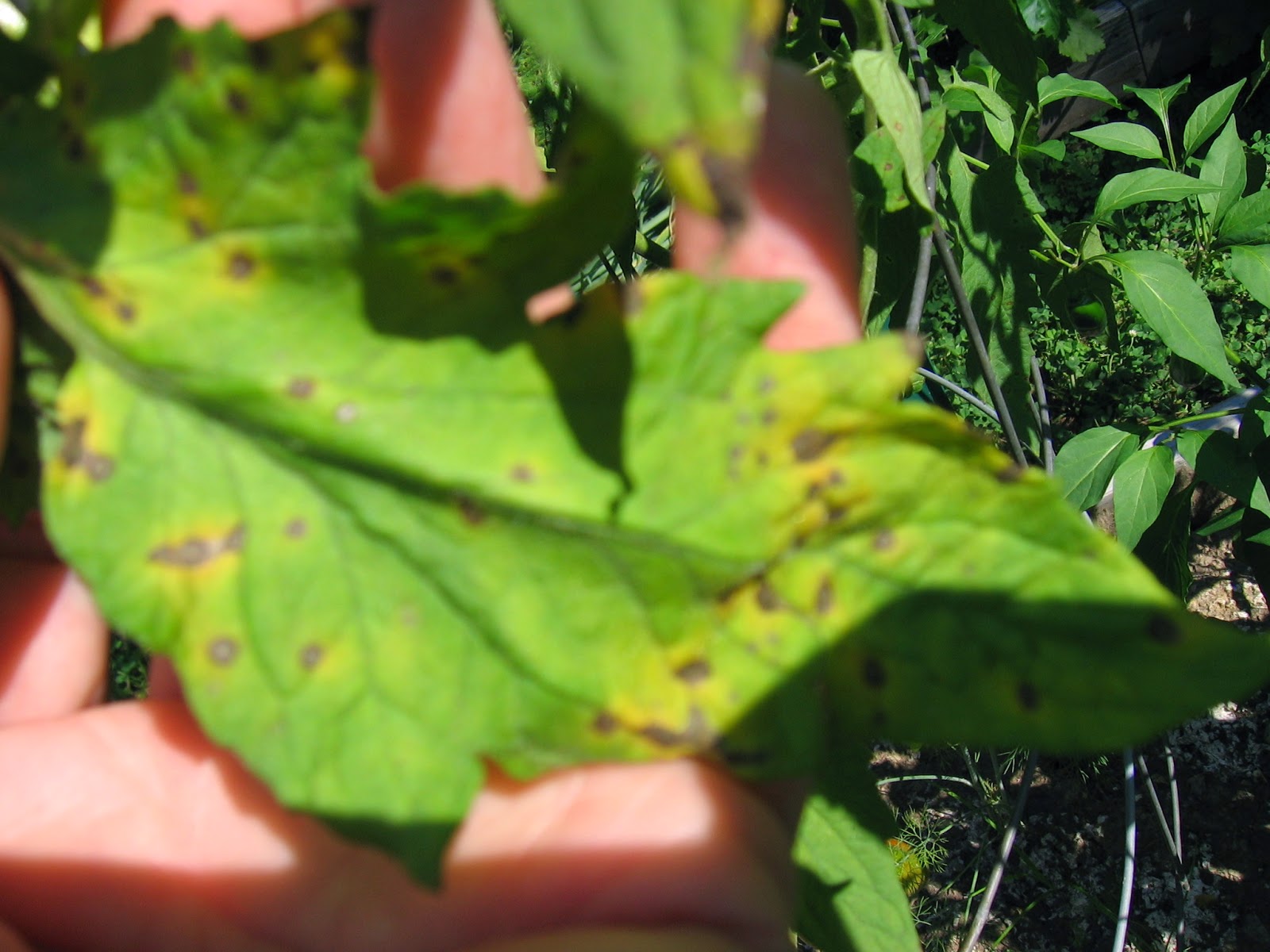 Once the ends of the leaflets are infected it's only a matter of time until the entire leaflet is destroyed.  To control the blight I remove the infected leaves.  Removing infected leaves also allows more air movement through the plant which helps control fungal diseases.  At this point most of the bottom 2 1/2 feet of foliage has been removed from the plants.  It looks like the plants are staying one step ahead of the fungus and should produce quite a few tomatoes. 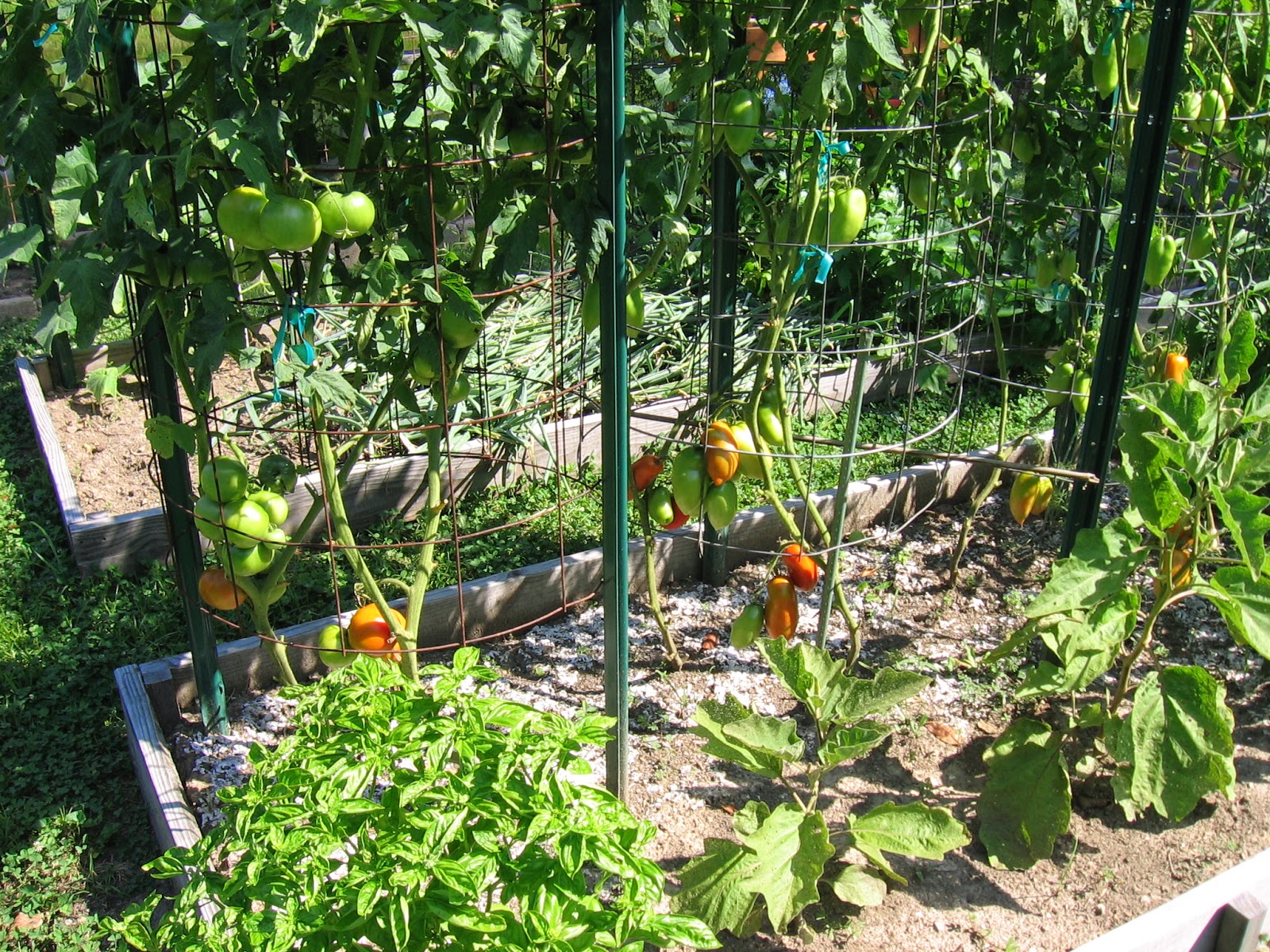 A pest that I always find on my eggplant is the flea beatle, which will leave thousands of tiny holes in the leaves.  I can spray them with pyrethins which will knock down their numbers for a day or so then they will be right back.  Mostly a healthy eggplant will grow faster than the beetles can set them back and produce enough eggplant for me.  This eggplant got off to a bad start and is much smaller than it's neighbor.  The flea beetles might win this battle. 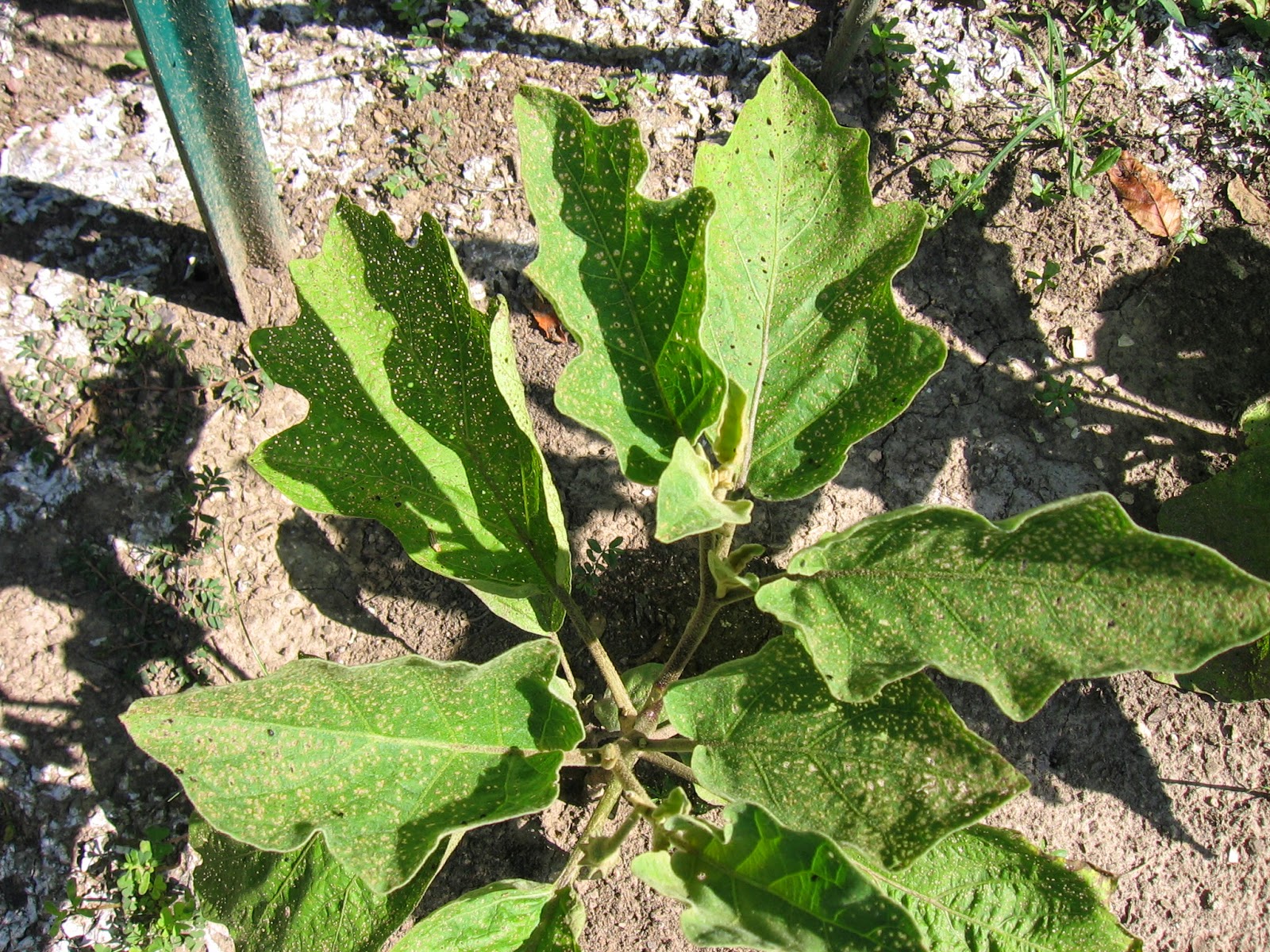 Then there's the squash vine borer, a truly evil pest.  It only takes one to kill a squash plant.  A rule of thumb when considering the borer is to start preventative measures when the base 50 F growing degree days accumulate to 900.  That was sometime in June around here.  At that time I started spraying the stems with Bt twice a week - the borer is actually a moth.  I don't spray the butternut or Teksukabotu squash with Bt because they have very hard thin stems that the borer can't penetrate.  Spraying with Bt is not a foolproof tactic and I'll know before long if the summer squash and Acorn squash have a borer inside the stem.

A good reason to control insect pests is because insects often are a vector for microbes.  A few years ago I found a few cucumber beetles on the cucumbers, a pest I don't usually see.  Before long the cucumbers got bacterial wilt, then the summer and winter squash succumbed to wilt.  I picked hardly any cucurbits that year.  That's why it's a good idea to check the garden every day for any new insects.

The most common pest on my squash is the squash bug.  I haven't seen any egg cases yet but it's only a matter of time.  One trick I use on squash bugs is to spray the stems with a product that is a mix of clove, garlic and cottonseed oil.  This doesn't kill the bug but it drives them to the top of the leaf where I can pick them off by hand.

Last year my apple trees - a Fuji and a Golden Delicious - were hit hard by aphids.  The leaves curled around the aphids and protected them from spray, and the outbreak was bad enough to cause many branches to grow in distorted patterns.  This Spring I sprayed the tree with horticultural oil before the buds opened.  The aphids with their attendant farmer ants have tried to establish themselves on the growing tips in late Spring but I was one step ahead of them.  I sprayed them with a combination of Neem oil and the clove, garlic and cottonseed oils mixture.  This nontoxic treatment effectively controlled the aphids and at this point they are no longer a problem.

Note:  Here's a link to find the current growing degree days in your area, http://www.weather.com/outdoors/agriculture/growing-degree-days.


Posted by gardenvariety-hoosier at 3:57 PM

Sounds as if you are experiencing a similar level of problems to me. My current Enemy Number 1 is the Cabbage Root Fly, which may have done away with my PSB plants. I haven't given up yet, but it's touch and go!