Harvests are beginning to ramp up now.  This week I collected the first non-leafy vegetable, kohlrabi.  It's a sign that more cole crops are on the way, very soon.  I picked a Grand Duke kohlrabi - 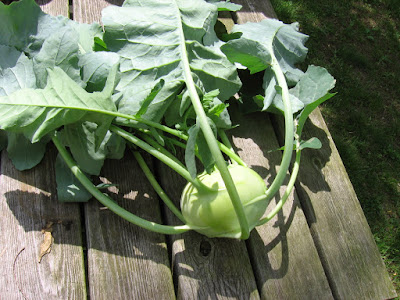 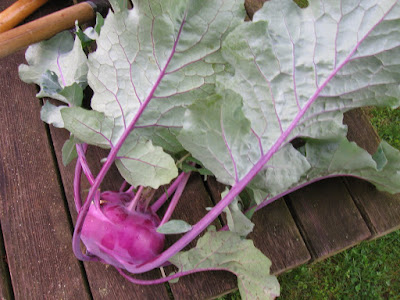 Both bulbs added up to just under two pounds.  The leaves went straightaway to the rabbits, who practically inhale them.  I like kohlrabi best raw, although it makes a decent soup and is not bad fried like hashbrown potatoes.  It's a nice addition to a salad, like a cucumber, mild and fresh tasting.

I also picked just under 1 1/2 pounds of spinach and a pound of lettuce.  It's been a good year for spinach, 5 1/2 pounds so far, all of it planted last October.  Spring-planted spinach rarely matures before bolting but this year might be an exception.  I'll never turn down more spinach.

To see what people get from their vegetable gardens head on over to http://daphnesdandelions.blogspot.com/
Posted by gardenvariety-hoosier at 4:21 PM

I'm with you, I like my kohlrabi best raw also. Though I'm still waiting on mine to size up. Have you tried it roasted? It almost tastes like a different vegetable, cubed up and tossed with a little oil and then roasted in a fairly hot oven.

For me it is the other way around. My spring spinach almost always does better than my overwintered spinach. But the overwintered one is always harvested a long time before the spring spinach has a chance to mature. So I grow both. My kohlrabi is getting there. It is only about 1 1/2" in diameter right now. It won't be too long. I usually wait to pick it until after my Asian greens are pulled out. Well not all of it, but most.

I have some purple kohlrabi on the go as well. Mine is "Modrava". I like it grated raw in salad, but I also like it lightly steamed, served alongside carrots.

I'll be growing the kolibri this year as well - it's so pretty! I hope it lives up to it's claim of staying tender even when it gets larger.