It was time to put the new fermentation crock to use.  On Saturday a new batch of Calypso cucumbers were harvested.  I'm really pleased with the pickling cucumbers this year.  Last year I put in two plants which gave me some early production then fizzled out, and the plants never got any size.  This year I planted four plants and pruned off the first fruits.  I think it paid off as the plants are at the top of the trellis and producing like crazy. 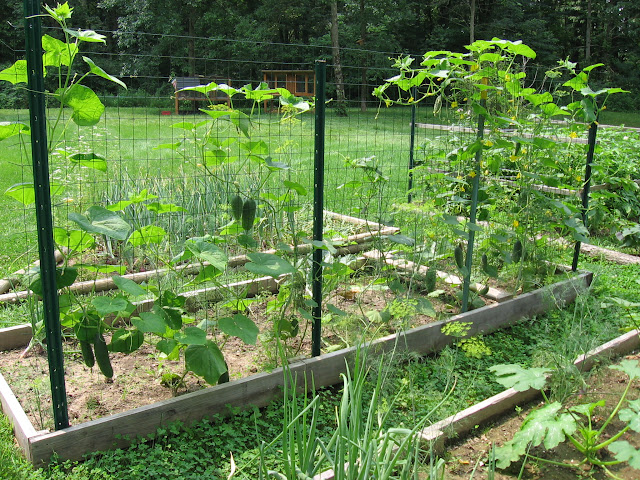 The plant in the left of the photo is a Diva, a slicing cuke.  The rest are Calypso.  Well here is what was picked.  Nice fat beauties, totaling 3.6 pounds. 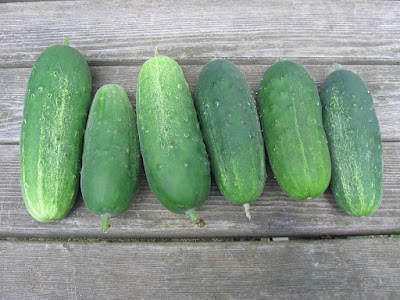 I didn't know if that was enough to fill a gallon fermentation jug but figured that I could always add one or two more as more cucumbers would be ripe soon enough.  It turned out to be just enough.  I sliced off the blossom ends, put in the herbs - fresh dill, dill seeds, garlic, mustard seeds, coriander, and a wild grape leaf for tannin - then the cucumbers.  The jar was filled up with a brine, two tablespoons per quart, and the lid with bubbler attached. 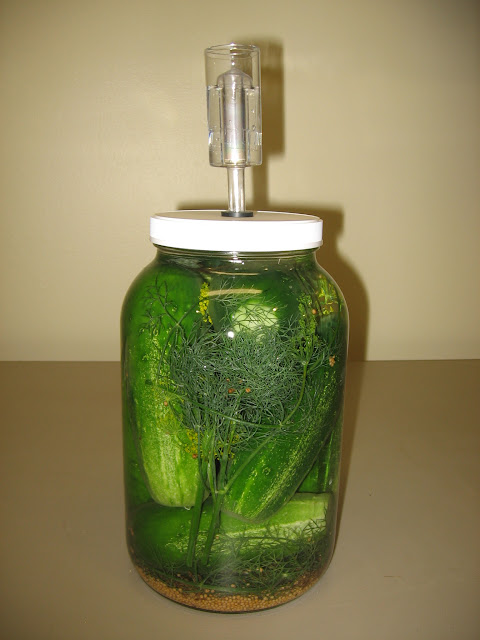 Since the cucumbers were whole they couldn't be packed as tightly as the sliced.  A top weight wasn't necessary as the topmost cucumber wedged in crossways under the shoulders of the jar, holding everything else beneath the surface.  Now it's wait and see.
Posted by gardenvariety-hoosier at 5:28 PM

Those look wonderful. I can't wait to try my hand at doing fermented cucumbers. I liked the fermented kohlrabi pickles. But cucumbers are the king.

Ditto, this is something I want to try this summer. Just need some cucumbers now.