Midday a very strong storm passed through the area.  Yesterday was actually nice after a morning rain.  It's become a familiar pattern - things just start drying out then another rain comes down.  This weekend I pulled out an acorn squash, rotted at the stem, and more carrots which are rotting in the ground.  Considering the weather there are still good things coming out of the garden.

Early last week I picked another batch of Calypso pickling cucumbers, 4 1/2 pounds, and one Diva slicing cucumber.  The Calypso cucumbers were made into three quarts of refrigerator pickles in short order.  So far the Calypso's have been producing in batches which is convenient.  The next batch is several days off, and if it is large enough I'll think about hot canning them. 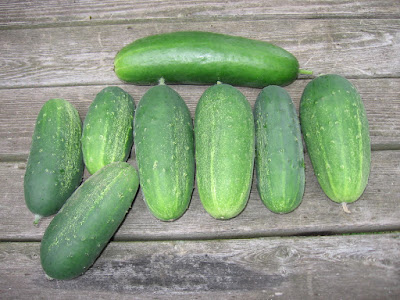 I think the Calypso's are a good looking cucumber. They just look like they will make a good pickle.

A few days later the first Fortex pole beans were picked, along with Marengo Romano and Provider.  The Provider bush beans look puny next to the pole beans.  I like to plant a row of bush beans early in the season so beans are coming in while the pole beans are still growing.   This was just over two pounds of beans. 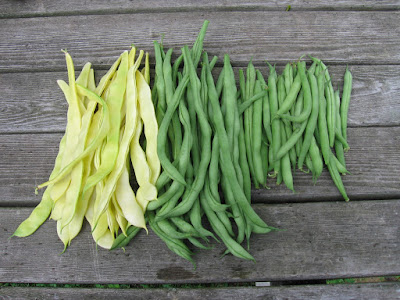 On Sunday I picked the first tomato, a Grandma's Pick.  The tomato wasn't fully ripe but at this point only bad things can happen if it is left on the vine.  It should have sat in a windowsill for a few days but I couldn't wait.  Also two more Diva cucumbers.  I was able to make a salad with lettuce, tomato and cucumber - probably the only time that will happen this year as the lettuce is done now. 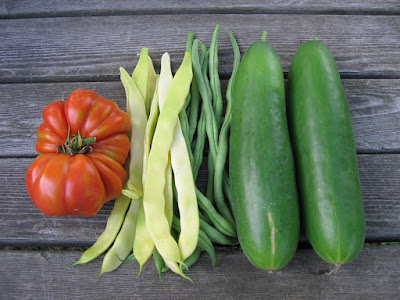 I compared this year's yields to last year's and they are about 20 pounds ahead of 2014, nearly 70 pounds so far.   Until this week kohlrabi was the leading producer at 14 pounds but the cucumbers have already passed that mark with 14.6 pounds.  The Calypso's have been very productive. 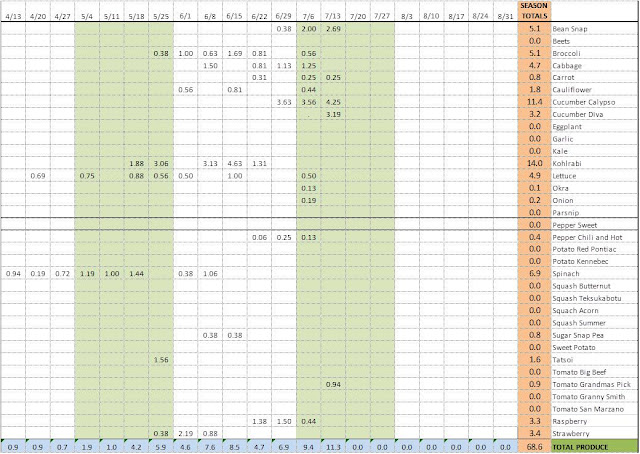 To see what other people are growing, visit http://daphnesdandelions.blogspot.com/
Posted by gardenvariety-hoosier at 4:15 PM

I found Calypso very productive when I grew it too. I think it was a toss up whether Cross Country (what I'm growing now) or Calypso was better.

Yes, those Calypsos look like picklers should. I'm really envious of your Divas...this is the 3rd year I've tried them and this year they are not even growing! I was beginning to think they were a hothouse cucumber only, but you've proved me wrong. Love the bean variety too. And that tomato sure looks ripe from the outside.

Fortunately the storms passed us down here and went east of us. Provider is one of my old standby bush beans. I planted Ky Wonder this year because I got free seeds, but I am regretting it. My pole beans are ready and I'm still waiting on the Ky Wonder!

The Calypso cucumbers are very nice. I have been envious of your pickles, still waiting for cukes here. I also like Fortex and Provider, but didn't plant bush beans this year since I have 4 types of pole beans planted. Maybe I should have just to get an earlier bean harvest.

Hurray for the first tomato - and it's a beauty too! Those beans look great too. After a bit of a rough start, I'm really looking forward to some green beans. Our bush beans are starting to flower, so it won't be too much longer, I hope.

Our weather has been relatively hot and dry - I suppose if I had to pick, I would probably opt for drier weather as at least you have the choice to water. When it rains too much, there's very little you can do.

Gosh, I wish I had tomatoes ripe for picking already. Mine are a way off still. I'm not a fan of pickled cucumber (particularly if it involves Dill, which I detest), but I love the little cucumbers like Diva, in a salad. So far, my 2 Diva plants have not produced any fruit, but I'm confident they will. I'm also growing several climbing beans. I always have Runner Beans and some French Bean types - in this case Kew Blue and Kentucky Wonder. Beans are one of the few crops I sometimes freeze, as long as I have enough.