Cleaning up the raspberry patch

The two everbearing raspberry varieties that were planted last year, Caroline and Autumn Bliss, have been giving me a nice trickle of berries for several weeks now, nearly four pounds from six bushes.  The berries are produced on last years canes, called floricanes.  But production has slowed now, and the foliage was looking worse for the wear, as can be seen in this photo.  The floricanes are fading and bent, while this year's canes, the primocanes, are upright and green.  It was time to remove the old canes to make room for the primocanes which are just now flowering. 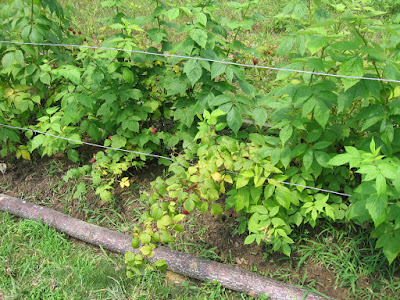 The new plants produced some berries on the tips last fall, always a nice bonus the first season.  At the end of the year I pruned off the ends of the canes that bore fruit, cutting the canes down about half their length.   In my opinion the Carolines from this early summer harvest are inferior to the Autumn Bliss.  Interesting because from last autumn's harvest I thought the Carolines were the better berry.

I could have waited a little longer and got a few more berries from the floricanes but with their poor condition it seemed better to get them out and give the primocanes the plant's energy, hoping to get a nice late summer harvest.  I picked the remaining ripe berries and set to work with the pruning shears.  It was a little prickly but easy enough - all I had to do was get my knees limbered up and nip off any brown shoots at the ground while leaving the green ones.  The patch looks much better now.  I took the pile of old canes to the burn barrel for disposal. 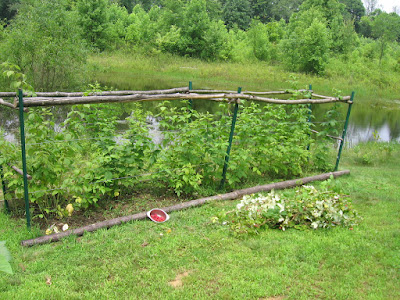 At the end of the year after the new canes have fruited I'll repeat what I did last fall - cut off the bearing tips of the canes.  With this method there are always primocanes and floricanes growing at the same time, and that is how the plants produce two crops in a season.  Some growers simply cut the canes to the ground in the fall, which results in only primocanes the following year and one harvest.  They claim it reduces chances for disease and actually produces a larger total yield.  But I like getting two crops a year.  The early summer harvest began just after the strawberries quit, and now the strawberries are blooming again.  Between the two I'll get a nearly continuous harvest of berries, and there are certainly worse things than that.
Posted by gardenvariety-hoosier at 6:23 PM

I have some Autumn Bliss and I have always followed the "cut them all down at the end of the year" approach, but your method sounds interesting.

I just planted out several canes for two everbearing raspberry varieties this spring. I think I will follow your method next year - I love fresh raspberries and would prefer a smaller harvest over a longer season than getting them all at once in the spring.