July closes out with another big cucumber harvest. The four Calypso plants are actually ramping up production.  It's getting hard to keep up.  Last week began slowly, with two cucumbers and the first Alma paprika.  When this pepper was set in the ground I thought it was a more typical cone-shaped paprika, just like the picture on the tag.  Nope, it's an Alma, which hasn't done that well here in the past.  This is the second time I've bought a paprika seedling from the greenhouse and it's turned out to be an Alma (you'd think I would learn).  This one had a lot of blemishes on it. 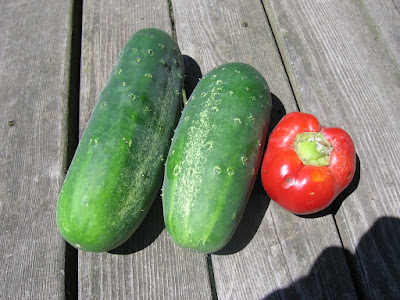 Midweek a really good harvest - Fortex and Marengo Romano beans, Calypso cucumbers, Millionaire and Silver Queen okra, Genovese summer squash and the first Super San Marzano sauce tomato.  I made a vegetable stir-fry with the squash, okra, tomato, basil and an eggplant picked earlier.  I'm impressed with these tomatoes, large for a sauce tomato and very thick-walled with small seed cavity.  The pole Romano's are incredibly productive.  They nearly double the output of Fortex, although I like the Fortex a little more. 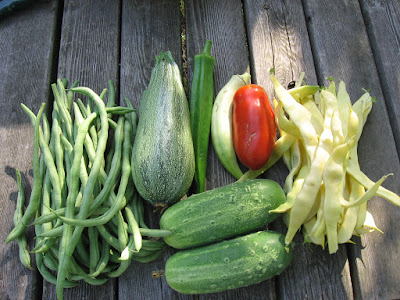 Then on Friday it was a cucumber jackpot, one Diva and many Calypso's.  The Calypso cuke in the foreground got by me and should have been picked earlier, and is not included in the harvest tally.  They get huge.  This one was too advanced for pickling and was a treat for the rabbits. 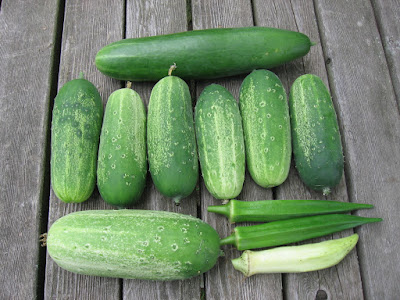 The very next day more cucumbers were ripe for picking.  I made more refrigerator pickles and canned 7 pints of pickles.   The first batch of canned pickles was surprisingly crunchy, not as crunchy as refrigerator pickles but still nice.  There will be another picking of cucumbers today.  Help!  I'm setting up a camp stove on the deck so they can be canned outdoors.   Too much of a good thing? 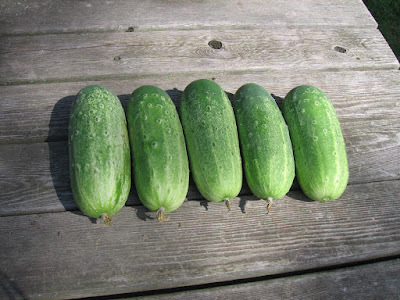 There were also more beans that weren't photographed.  The Tribute strawberries have resumed production of decent sized berries, although I'm only getting about half of them. 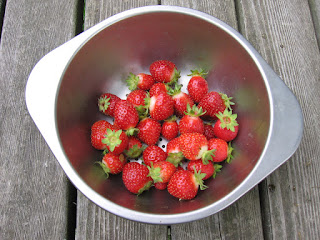 All in all, a decent week.  Three and a half pounds of snap beans, over eight pounds of cucumbers and a pound of strawberries.  The garden's output just passed 100 pounds, with the most productive month just ahead.  To see what other people are getting from their plots, go to http://daphnesdandelions.blogspot.com/

Here's the totals for the year so far. 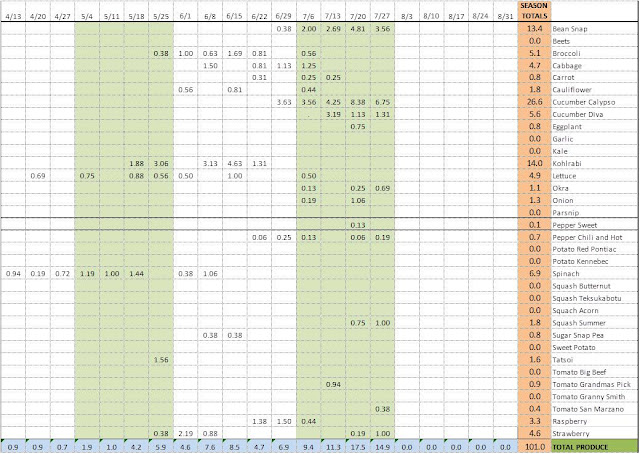 Posted by gardenvariety-hoosier at 3:45 PM

Lovely harvests. I keep hoping to be a little more inundated with cucumbers. But if I'm patient I'll get enough to ferment for pickles. I have done one jar already, but I think I'd like two more. I guess I have plenty of time, but the first ones always seem better than the later cucumbers.

Wow, beautiful harvests! How big do those Super San Marzanos get? I'm always scouting for a good sauce tomato.

Too bad about the Alma. It didn't do much here when I grew it one year. It's a shame you aren't closer, because I had extra paprika plants that wound up on the compost.

Those Calypso cucumbers are amazing. That one is going on the idea list for next year. I saw a video where pickles were made from dehydrated cucumbers, so you could make pickles during the winter. But the way you are going, you may have a lifetime supply canned by end of summer.

Already at 100 lbs - that's impressive! Looks like you are in for a very bountiful year, especially for the cucumbers!

I'm growing Gold Marie - a yellow pole romano as well. The beans are just starting to size up & there are a ton of them. The vines are so aggressive, I'm worried they will take over the Trail of Tears right beside them.

Wow! I'm impressed. The beans look wonderful. Actually, all of it looks delicious, and beans are a favorite of mine.